Tory MP Crispin Blunt has been criticised for questioning the conviction of his colleague, Imran Ahmad Khan.

Khan, MP for Wakefield, was found guilty on Monday of sexually assaulting a 15-year-old boy in 2008, and was thrown out of the Tory party following the verdict.

But Mr Blunt described the conviction as a “dreadful miscarriage of justice” and “nothing short of an international scandal”.

Southwark Crown Court had heard how Khan, a gay Muslim elected to Parliament in 2019, forced the victim to drink alcohol, dragged him upstairs, pushed him on to a bed and asked him to watch pornography before the attack at a house in Staffordshire.

But Mr Blunt, who was at the London court on Monday, said the case “relied on lazy tropes about LGBT+ people”, adding that the result had “dreadful wider implications” for LGBT Muslims “around the world”.

She called on Prime Minister Boris Johnson and Tory chairman Oliver Dowden to “take action” against the former justice minister and “distance their party from his comments”.

Mr Blunt, MP for Reigate, came out as gay in 2010 and chairs the cross-party LGBT+ group. 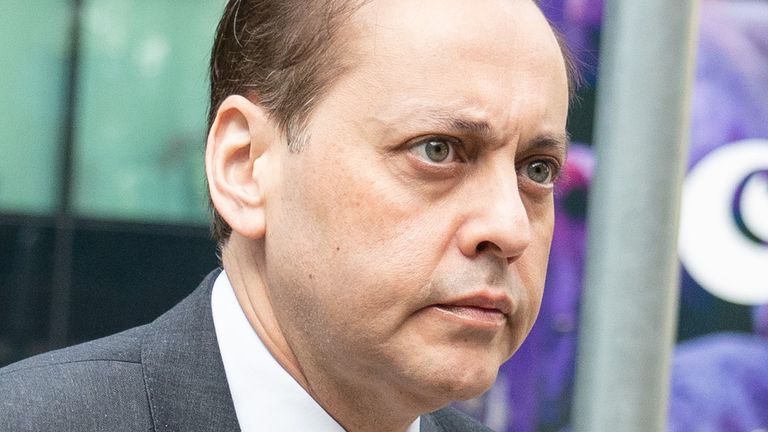 Image:
Imran Ahmad Khan has yet to be sentenced but plans to appeal the verdict

On Monday evening, Labour MP Chris Bryant and the SNP’s Stewart McDonald were among members of the group who resigned in protest.

Mr Bryant said Mr Blunt’s comments had been “completely inappropriate”, and Mr McDonald tweeted: “Parliament needs a respected and robust LGBT group, and Crispin can no longer provide that leadership”.

Veteran Tory MP Sir Peter Bottomley, the father of the House of Commons, was also at court on Monday and told PA news agency: “It was not the verdict I anticipated.

“Unless overturned on appeal, the jury verdict following the summing up has to be respected.”

Khan has yet to be sentenced but his legal team said he plans to appeal the verdict.

A Tory spokesman, when asked whether the party agreed with Mr Blunt’s view, reiterated that Khan had been expelled from Boris Johnson’s outfit, adding: “Our view is pretty clear”.