Man, 31, arrested on suspicion of attempted murder ‘after officer slashed with a machete’

A man, 31, has been arrested after he injured an officer by slashing him in the arm with a ‘machete’ in east London today, police have said.

The policeman was taken to hospital and discharged, with the injury understood to be non-life threatening.

The 31-year-old has been arrested on suspicion of attempted murder of the officer.

The man arrested was given first aid after he sustained an injury to the neck, which is believed to have been self-inflicted, and was taken to hospital as police await to hear about his condition.

Police were responding to an incident involving a man armed with a machete said to be ‘suffering a mental health crisis’.

In a statement on Twitter this afternoon the force said: ‘Officers on scene in Skelton Road #Newham dealing with reports of a man suffering a mental health crisis inside an address.

‘One officer has received a slash injury to his arm and has gone to hospital. Officers continue to engage with the man to resolve the situation.’

Video footage on social media – understood to be from the scene in Forest Gate this afternoon – showed queues of police cars and vans lined up down the road with a heavily police presence in the area. 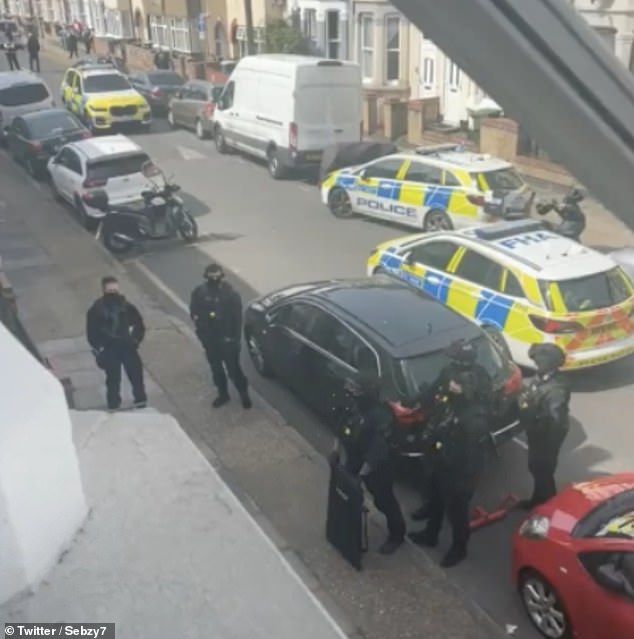 Social media footage from Forest Gate, east London today. An officer was injured after being slashed in the arm with a ‘large knife’ while responding to an incident

Another clip on Twitter showed a crowd gathered around  a street cordoned off with police tape.

A police statement said: ‘A man has been arrested by officers responding to an incident at a house in Newham.

‘At approximately 11:50hrs on Sunday, 10 April, police were called to reports of a man armed with a machete suffering a mental health crisis at a house in Skelton Road, E7.

‘Officers attended the location. One officer received a slash injury to his arm and was taken to hospital. He has been discharged following treatment.

‘Emergency services remained at the scene while police officers attempted to engage with the man.

‘A number of people who were inside the address were helped to safety by colleagues from London Fire Brigade using a ladder. None of these people were hurt.

‘At around 19:15hrs, officers arrested the 31-year-old man on suspicion of attempted murder of the police officer.

‘The man had sustained a knife injury to his neck, which is believed to have been self-inflicted.

‘First aid was administered and the man has been taken to hospital by London Ambulance Service. We await an assessment of his condition.

‘As is routine in circumstances where a person has sustained an injury during a police operation, the Met’s Directorate of Professional Standards has been informed.’