Sabina Nessa only took a shortcut through a park where her murderer lay in wait because she was running late, the Old Bailey heard today – as her parents condemned the ‘animal’ sexual predator who attacked her at random.

The 28-year-old had told friends she usually avoided walking through Cator Park in south-east London at night, but decided to do so in her rush to meet a friend at the nearby Depot bar.

Koci Selamaj, 36, was seen lurking in the park waiting for a victim on the evening of September 17. Ms Nessa walked past around 20 minutes later, with CCTV showing him stopping, turning around and sprinting after the 28-year-old before battering her 34 times with a 2ft-long metal traffic triangle, which shattered to pieces.

Selamaj then carried away an unconscious Ms Nessa, removed her underwear and strangled her to death with her tights. She was not known to Selamaj beforehand and he set out to target any ‘vulnerable lone woman’ in a similar fashion to Wayne Couzens’ killing of Sarah Everard six months prior.

The body of the ‘kind, positive and dedicated’ teacher, who lived just 300 yards away and taught a year one class at Rushey Green Primary School in Catford, was discovered nearly 24 hours later by a dog walker hidden underneath a pile of grass.

At a hearing today, Selamaj refused to face Ms Nessa’s family. Addressing him in absentia, Ms Nessa’s parents, Abdur and Aziban, told him he ‘had no right to touch our daughter or take her away from us in such a cruel way’.

Ms Nessa’s sister Jabina Islam called school dropout Selamaj a ‘coward’ for not facing up to his crime in court. She said: ‘You are an awful human being and do not deserve your name to be said. You are a disgusting animal.’

Judge Mr Justice Sweeney said it appeared Selamaj had ‘positively enjoyed what he did in the park’. He said Selamaj could expect a life term of at least 30 years, but adjourned sentencing until 10am on Friday. 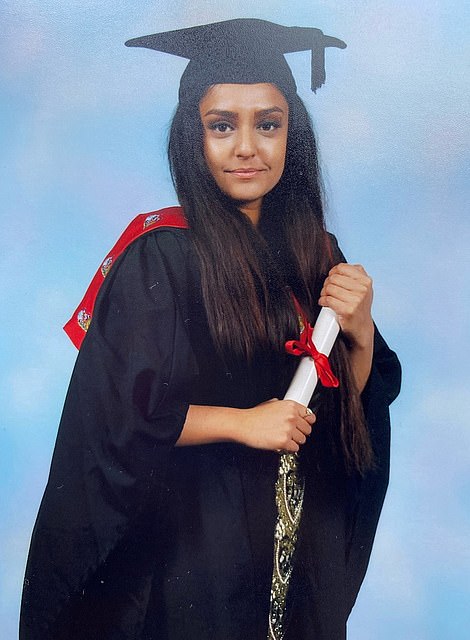 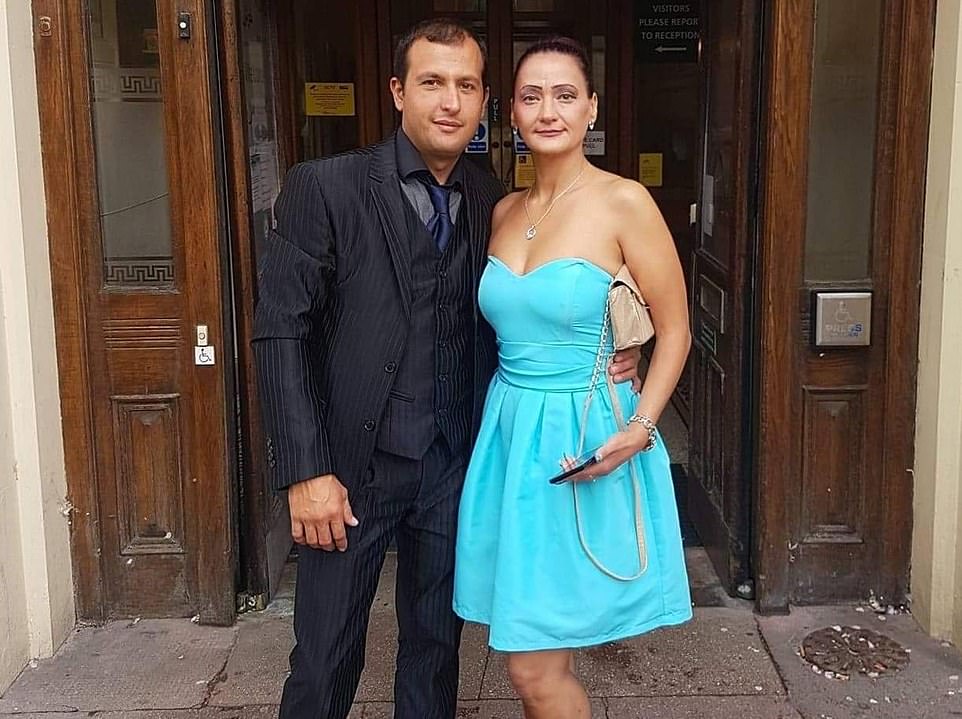 Prosecutor Alison Morgan QC said Ionela, the killer’s abused wife, was ‘devastated’ at her husband’s actions and had returned home to Romania. She reported Selamaj to police after seeing his image circulating in the media 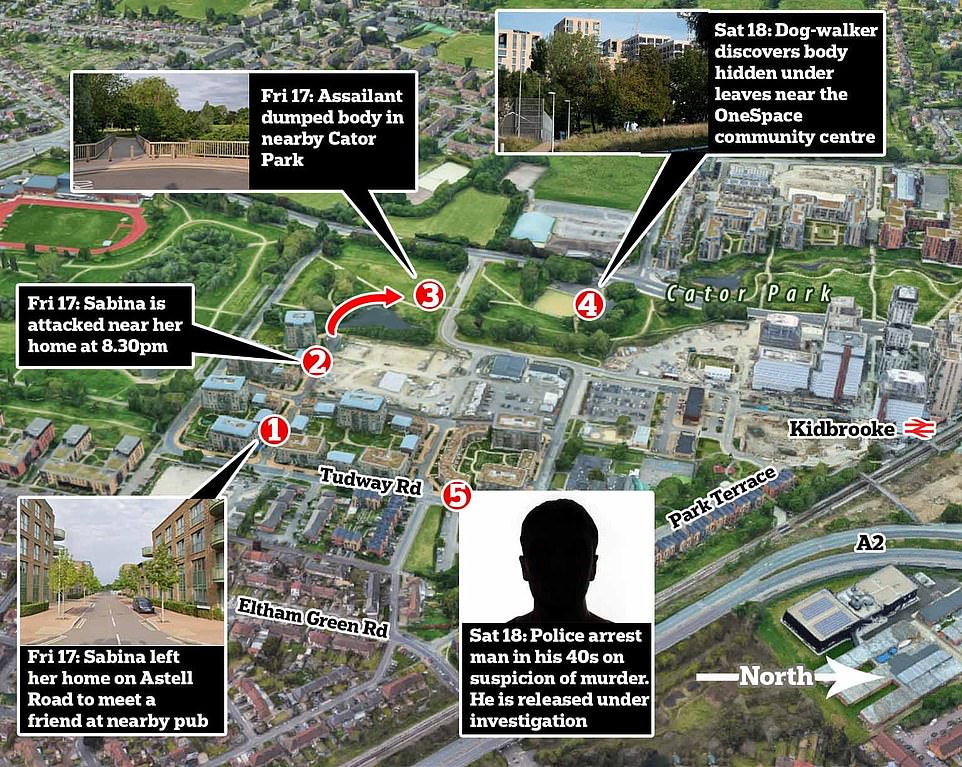 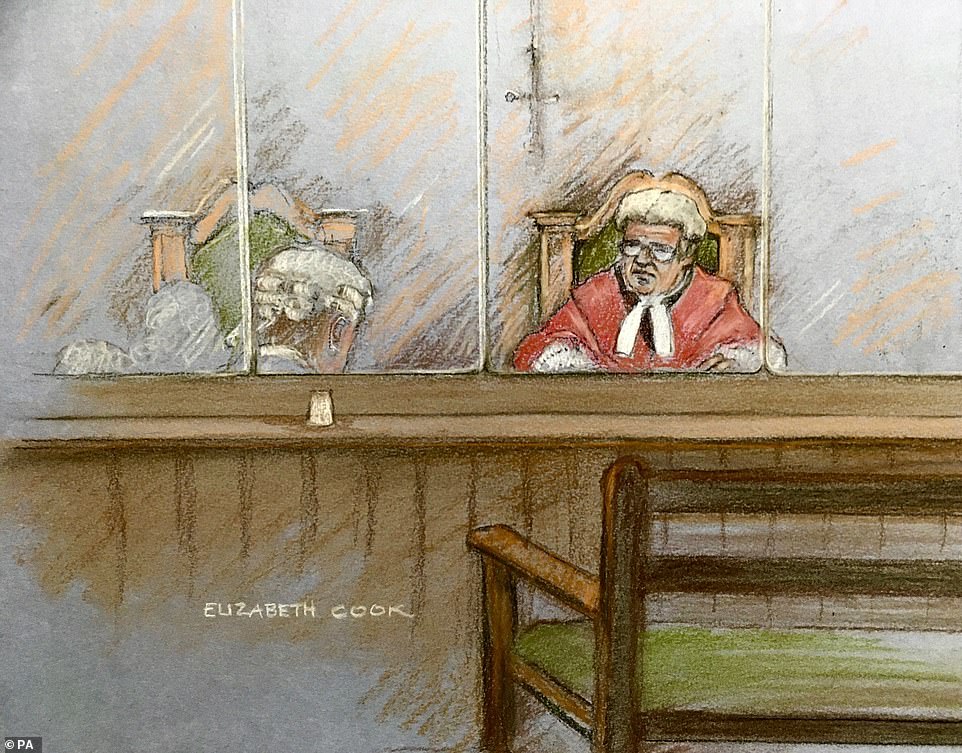 Earlier on the day of the killing Selamaj had driven to the five-star Grand Hotel in Eastbourne to proposition his wife, Ionela – who worked there – for sex. She refused, having left him weeks before after trying to strangle her at least three times.

After being rejected by his estranged wife, Selamaj also tried to meet someone for sex in Brighton but failed. The prosecution said he was ‘looking for someone to have a sexual encounter with’ when he drove to London and went to a Sainsbury’s to buy energy drink, chilli powder and a rolling pin, with CCTV showing him move it to and fro in his hands as if testing its strength.

Prosecutor Alison Morgan QC said he had picked up the rolling pin and gone back to his car when he realised a ‘better weapon’ was an emergency triangle.

He dumped the traffic triangle he eventually used to murder Ms Nessa in the Teise River in Kent while driving back to Eastbourne, where he lived, with his route tracked by police using ANPR cameras. It is unclear why Selamaj decided to drive to London, and Kidbrooke in particular, when he had never been there before.

Ms Morgan said Ionela, the killer’s abused wife, was ‘devastated’ at her husband’s actions and had returned home to Romania, while the rest of his family found his actions ‘simply inexplicable’. Ms Nessa reported Selamaj to police after seeing his image circulating in the media.

‘You had no right to take her away from us’: Sabina Nessa’s family and school headteacher give victim impact statements

Ms Nessa’s parents, Abdur Rouf and Aziban Nessa, provided a victim impact statement that was read out to the court.

They described their daughter as a ‘girly girl’ who loved ‘makeup, handbags and shoes’. She was ‘kind, generous, funny and determined’, the court heard.

Addressing Selamaj, in absentia, they said: ‘As a parent, you would never have thought your child would die before you. You had no right to take her away from us in such a way.’

‘You are not a human being, you are an animal,’ they said.

The couple continued: ‘Did you really think you wouldn’t get caught?… You have no right to take our daughter’s life away and no right to touch her.’

Reading her statement, Ms Nessa’s sister Jabina Islam called Selamaj a ‘coward’ for not facing up to his crime in court.

She said: ‘You are an awful human being and do not deserve your name to be said. You are a disgusting animal.’

She said her sister was an ‘amazing role model’ who was ‘powerful, fearless, bright and just an amazing soul’. Ms Islam described being haunted by images of what her sister went through in her last moments.

She said Ms Nessa was a ‘happy, hard-working’ teacher who had a ‘fulfilling career ahead of her’.

Regarding Ms Nessa’s class of 30 students, she said: ‘For the rest of their lives, these young children will never be able to comprehend why someone murdered their teacher and the world in which they live is not safe for them to play in a park.’

It is believed that Selamaj used his Greek citizenship to arrive in Britain – before marrying Ionela four years ago. She is believed to have settled status in the UK, with Selamaj obtaining a five-year spouse visa. Ionela repeatedly subjected to domestic abuse, although these incidents were not reported to police.

Ms Nessa had made plans to meet a friend at The Depot bar in Kidbrooke Village on the evening of September 17. From her home, her route took her through Cator Park where Selamaj was waiting.

Alison Morgan QC said: ‘It was out of character for Sabina to walk in Cator Park after dark.’

Ms Nessa had discussed being concerned about being there after dark.

‘It seems likely that she chose to walk across the park that night because she was running late and this was the quickest route to get to the Depot Bar,’ Ms Morgan said.

She said an examination of Ms Nessa’s body showed no positive signs of sexual assault but that it couldn’t be excluded.

‘The defendant removed Ms Nessa’s tights and underwear and lifted her clothes so that the mid and upper parts of her body were exposed.

‘The circumstances in which Ms Nessa’s body was found demonstrate the sexual motivation that must have existed,’ she added.

Ms Morgan warned those assembled in court before showing CCTV of the attack on Ms Nessa.

Selamaj was in the park for 25 minutes with his hood up and emergency triangle in hand before Ms Nessa arrived.

In grainy footage, Ms Nessa appeared ‘oblivious’ as Selamaj ran up behind her and attacked her on the path near a park bench. He hit her over the head 34 times with his weapon, which broke apart as he rendered Ms Nessa unconscious. Selamaj then dragged her up a slope and out of view for 10 minutes.

Ms Morgan said the defendant asphyxiated her and removed her tights and underwear before trying to cover her body in grass. He returned to Ms Nessa’s body for another 10 minutes. Selamaj used wet wipes to clean the park bench before leaving the park.

On his way back to Eastbourne, Selamaj disposed of the emergency triangle in the River Teise in Tunbridge Wells, Kent.

Ms Morgan invited the court to conclude there was a sexual motive for the killing, even though there was no ‘positive’ evidence of a sexual assault. 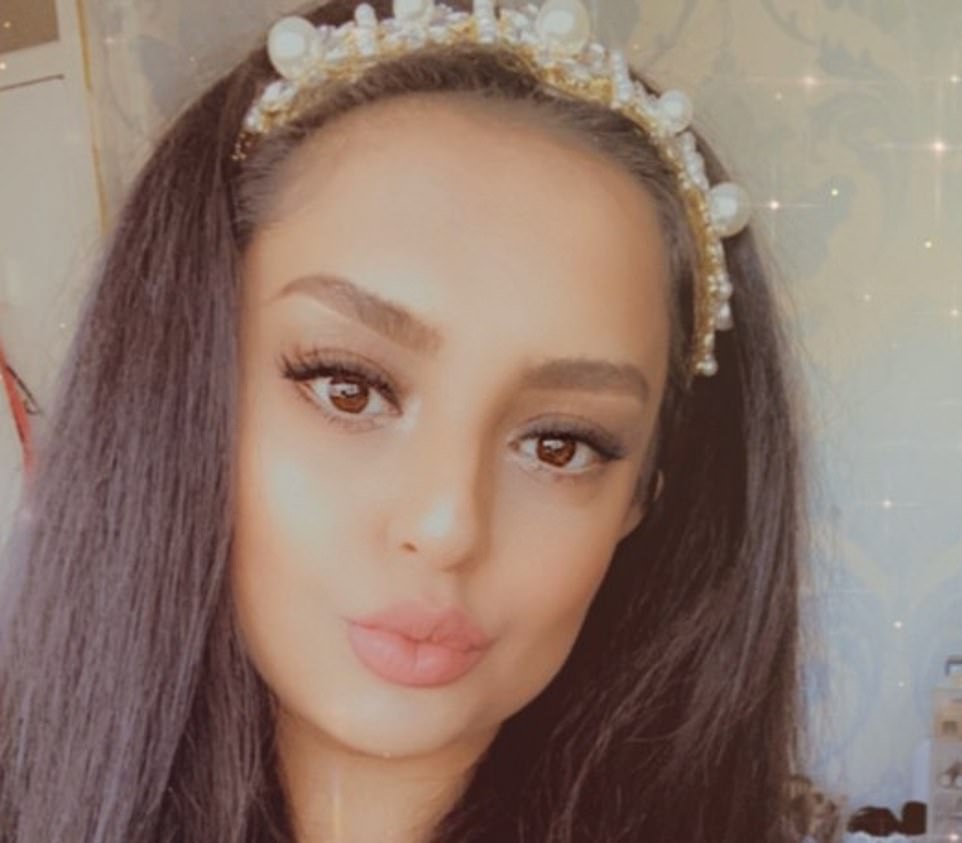 The body of Ms Nessa, who taught a year one class at Rushey Green Primary School in Catford, was found nearly 24 hours after the attack and covered with leaves near a community centre in the park 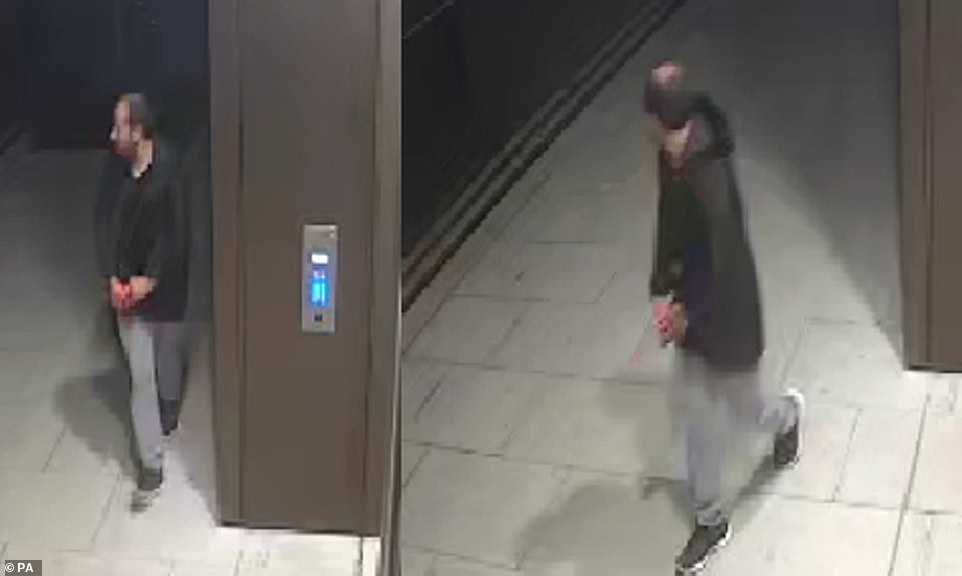 Selamaj was caught on CCTV near Pegler Square in London (pictured above) and later spoke with staff in the lobby of The Grand Hotel, Eastbourne wearing the same clothes he was earlier seen in 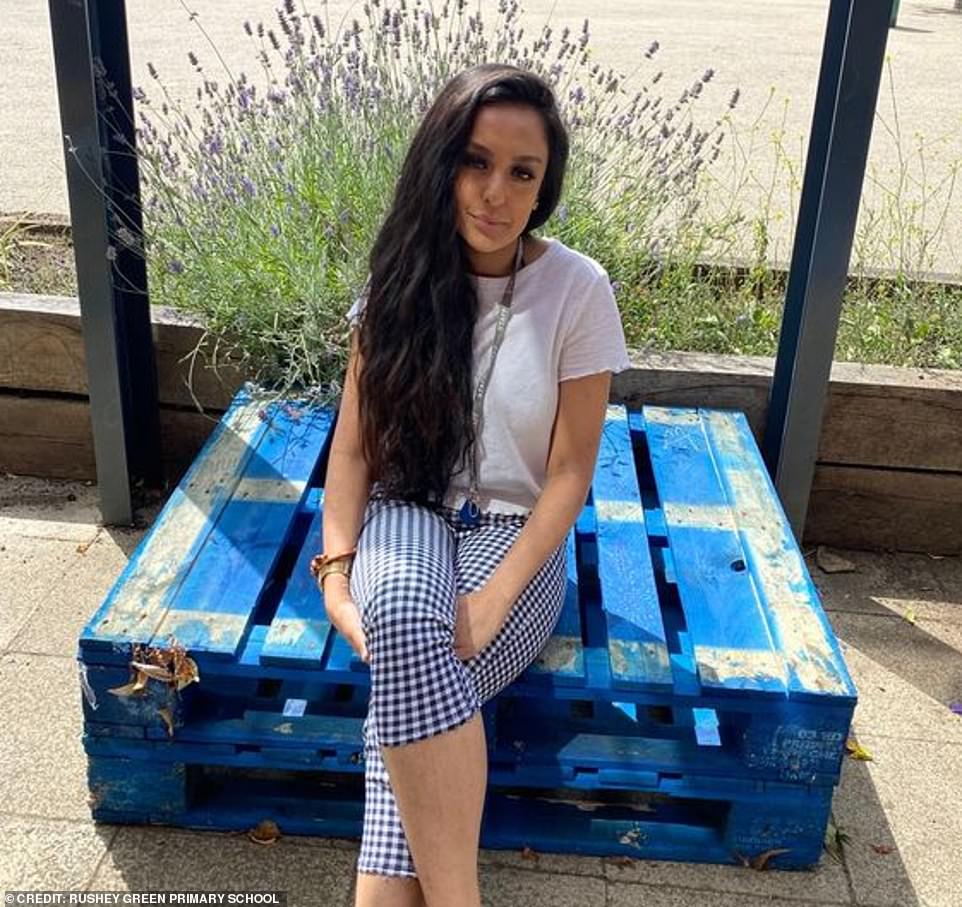 Selamaj strangled Ms Nessa (pictured) in undergrowth and removed her tights and underwear in what was suspected to be a sexually-motivated attack, prosecutors said 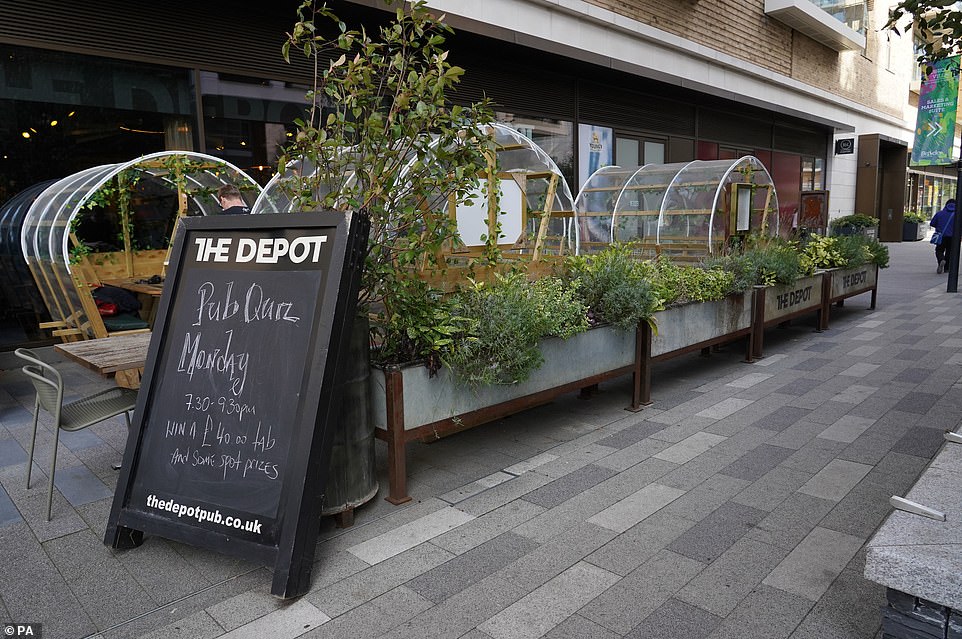 The Depot bar in Pegler Square, where Ms Nessa was due to meet with a friend before she was ambushed and killed

At his sentencing today, prosecutor Alison Morgan QC said Selamaj had a history of violence against his former wife, Ionela.

She said his behaviour towards him began to change from May 2021 onwards, starting with controlling behaviour and then escalating into physical aggression.

After leaving him, his wife told colleagues at the hotel where she worked that he had tried to strangle her. This is believed to have happened at least three times.

In another incident, Selamaj pushed Ionela, causing her to fall backwards onto a sofa.

Ms Morgan said she had been ‘devastated’ by what Selamaj had done to Ms Nessa and commended her courage in coming forward.

She called police after recognising her husband’s image circulating in the media and has since returned to Romania.

The court heard Selamaj arrived back at The Grand Hotel at midnight and checked out in the morning and went to work at an Esso garage in Lewes.

Selamaj was arrested on September 26 last year and trainers with Ms Nessa’s blood on them were seized from his home.

He refused to comment in police interviews but when he was charged, the Albanian national said: ‘What will happen if I open up now and say everything.’

The court heard how – earlier on the day of the killing on September 17 – Selamaj had booked a room at The Grand Hotel in Eastbourne.

Ms Morgan suggested booking a room at the hotel near his home was ‘indicative of his premeditation to have some kind of sexual encounter that evening’.

At about 6pm that day, Selamaj contacted his estranged partner.

In a statement, she said he appeared ‘very agitated’ when they met at his car near the hotel.

She said: ‘I think that he wanted to have sex in the car. I don’t know what was bothering him, but he was very agitated.’

She refused to join him on the back seat and left, the court was told.

Following Ms Nessa’s murder, Selamaj was arrested in the seaside town and charged over her death days later.

In a police interview, he made no comment except to deny murder when asked directly if he was responsible for killing Ms Nessa.

He later changed his plea to guilty.

Today, Mr Justice Sweeney adjourned the sentencing until 10am on Friday. 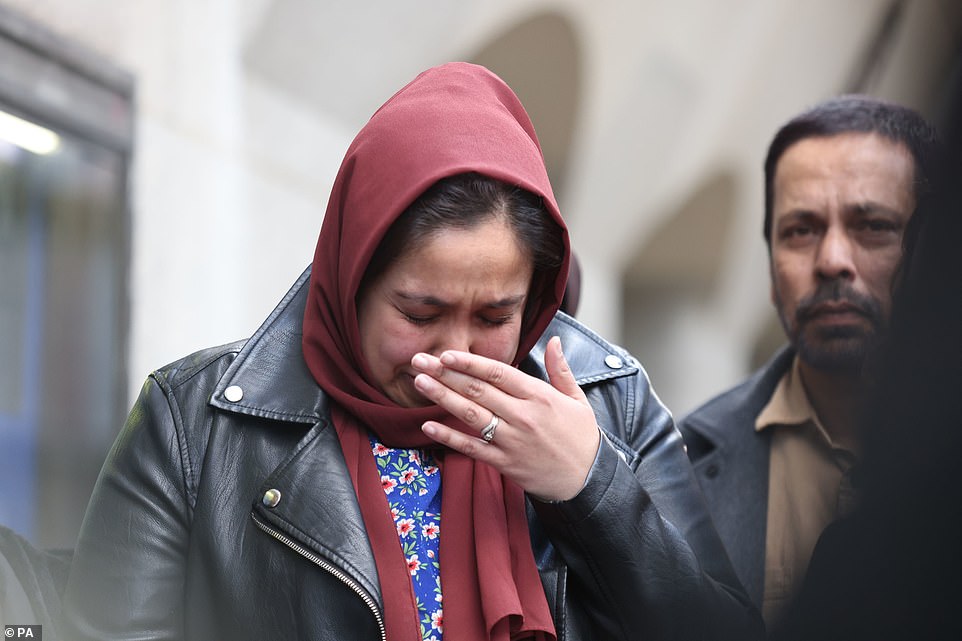 Speaking outside the Old Bailey on Friday, February 25, Ms Nessa’s sister Jebina Islam (above) broke down in tears as told how the guilty plea was ‘difficult to digest’ 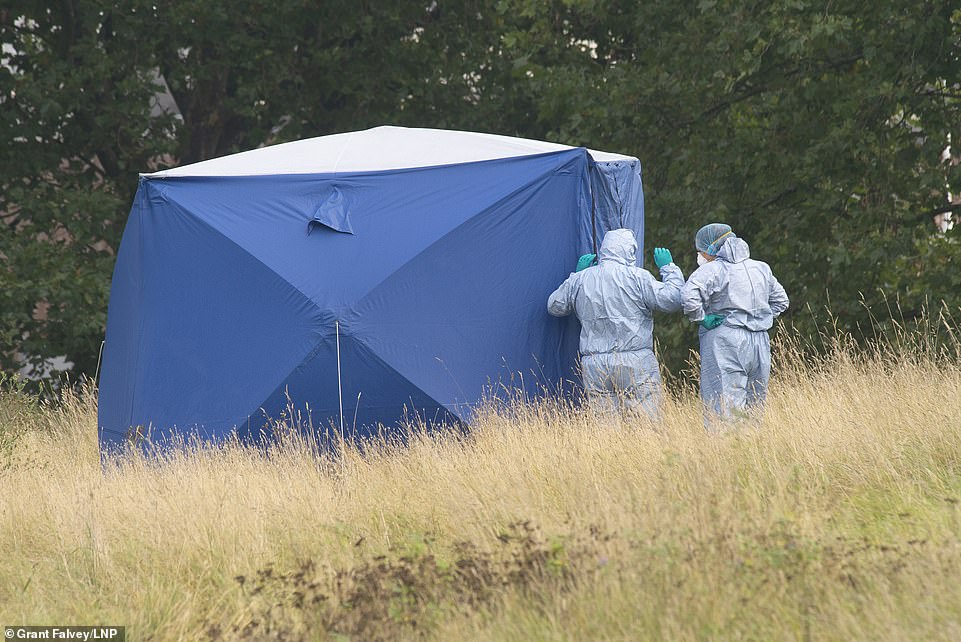 Pictured above: A forensics tent in Cator Park in Kidbrooke, south east London, where the teacher was found dead 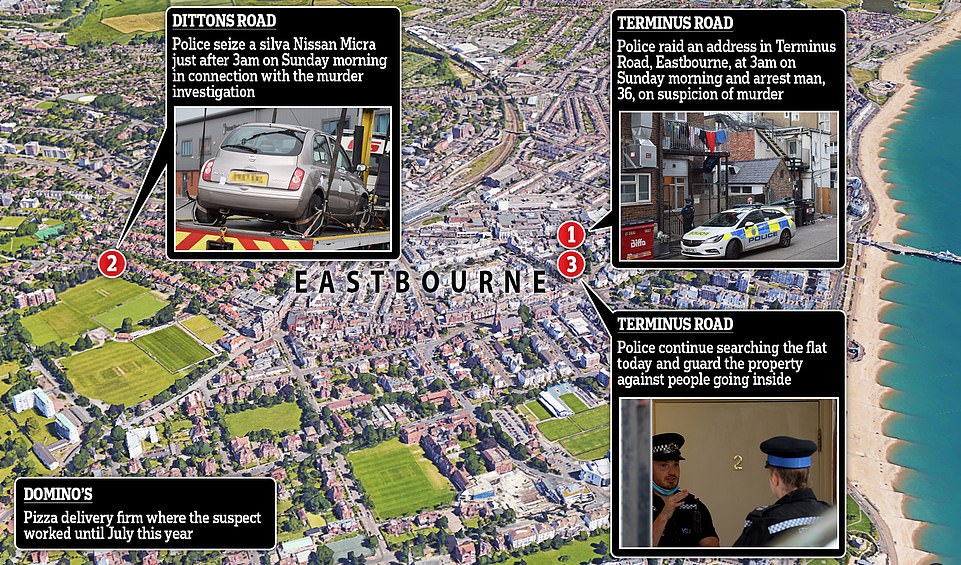