Turns out Polosa is even faster than he thought. He finished the Springbank Sprint 10K in 1:14:04.

How does he do it?

“I just keep working, doing something that I think helps,” said a soft-spoken Polosa at the end of the race.

“It was so much better than he expected,” said his smiling wife, Lynne Weaver, at the finish line. “I didn’t know what to expect and it’s fabulous. It’s really exciting.”

Polosa started running at the age of 60 but was forced to give it up two decades later because his knees were giving him trouble. Miraculously, Polosa rebounded in his 90s after his wife got him knee braces, and now Polosa is breaking Canadian records.

The course was certified to capture Polosa’s time at the 8K and 5 mile marks too; he easily beat the 8K time and he’s the first in his age category to log times for the 5 mile and 10K distances.

“Three in one race, at least that’s efficient,” Weaver joked.

Canio Polosa, who set 3 Canadian records on Saturday, shares a moment with the youngest competitor, 18-month-old Luke Bell who ran the 50 metres. (Submitted by Lynne Weaver)

“I’m over the moon,” said Polosa’s coach Sherry Watts. “I think he’s been training really well all winter, and he’s just a very determined person. I think having Lynne behind him probably helps a lot too.”

“I’m going to feed him like crazy because he’s burned off huge calories and as you can see he can’t afford to burn off too many calories,” said Weaver of her husband who stands just 5’6″ and weighs 113 pounds.

“And he’ll probably have a power nap,” she said. “He’s kind of like a puppy. They run like mad and then they eat and go to sleep. He’s sort of like that.” 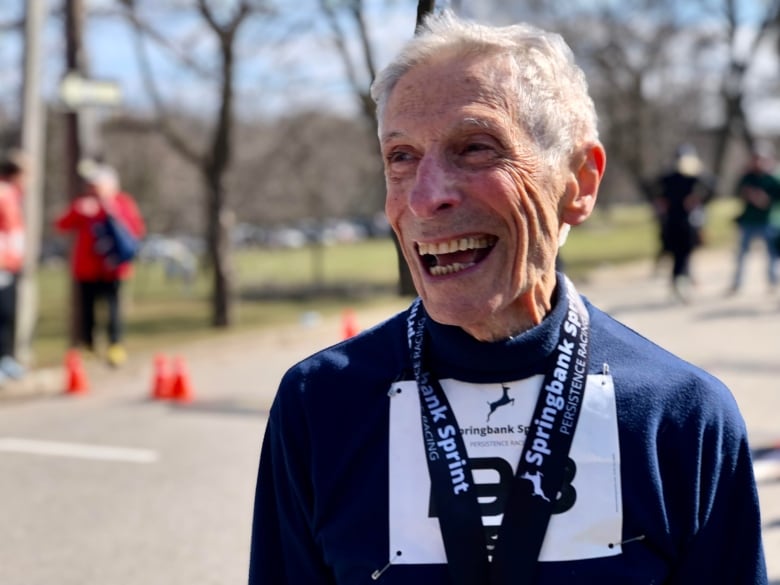