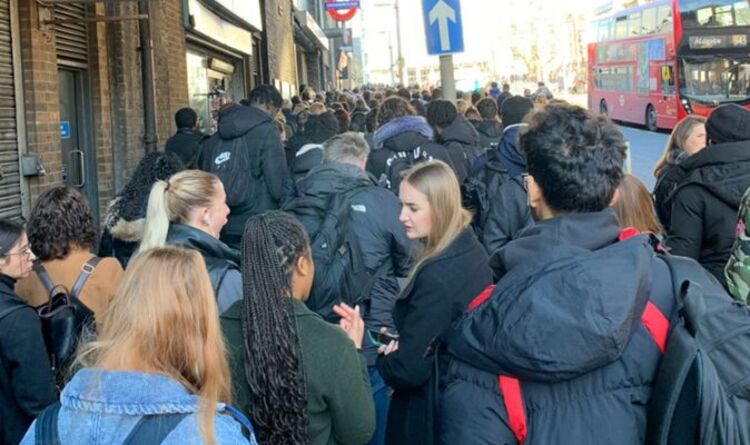 One Twitter user, Callum S, tweeted: “Something going on at London Bridge underground station, they’re not granting access to the platforms.”

The reason for the delay has not yet been confirmed, however it is likely to be linked to wider delays on the Jubilee Line which caused havoc for commuters this morning after a train broke down in Canary Wharf.

Crowds of people trying to get to work were seen lining the tube station early this morning as the Jubilee Line was suspended between North Greenwich and London Bridge.

The breakdown left hundreds of commuters stranded at stations across the network with delays reported along the Jubilee Line.

Waterloo underground station was also left in chaos by the disruption at Canary Wharf.

Further delays were caused at the travel hub by hundreds of people attempting to crowd onto delayed trains as the platforms were jammed by frustrated commuters.

Many trains were unable to depart as passengers obstructed the doors.

There were reports of commuters trapped on trains for up to 15 minutes waiting to depart as other commuters tried to squeeze onto overcrowded carriages.

Pictures were shared on social media of commuters cramped together waiting for trains to depart.

Severe delays were still being experienced across the Jubilee Line at 10am.

Transport for London (TfL) has not yet been confirmed when the faulty train will be fixed and the line back up and running to schedule. Travellers are being told to take local bus services instead.

Eastbound trains were reportedly cancelled further than London Bridge as many disgruntled commuters took to Twitter to complain about the travel chaos.

One frustrated twitter user said: “@TfL Rush hour at Canary Wharf Station & only one barrier is into the station and the rest are going out. Creating a bottle neck and queue. Then forcing everyone to use the second set of escalators as the first set are only going up & none are going down. What are you playing at?”

One user complained: “Second day back in the office and Jubilee line is suspended.”

Further delays are also causing disruption on the Overground between Surrey Quays and New Cross, where there is currently no service running due to a broken down train at Shoreditch High Street.

The Circle Line is also experiencing minor delays due to train cancellations.

There is reportedly no service between Moorgate and Kennington on the Northern Line while TfL warned of minor delays on the Victoria Line this morning caused by an earlier fire alert at Brixton.