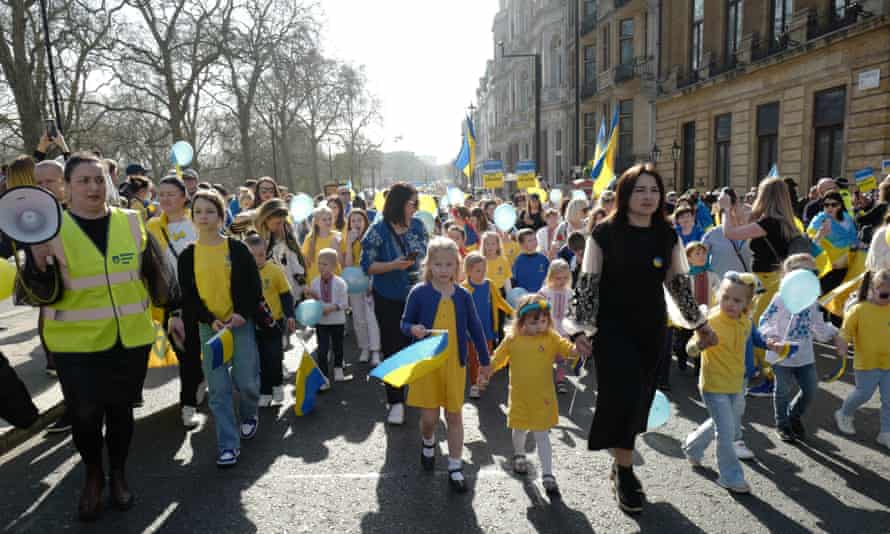 It was the kind of spring day in Mayfair they used to write songs about. Beneath a cloudless sky daffodils were blooming in Hyde Park. Blue and yellow, the colours of Ukraine.

Everything seemed to be blue and yellow: the Euro Car Parks sign, the police vans and motorcycles, and the hi-vis jackets their occupants wore, but most obviously the hundreds of flags held aloft by those gathered beneath the Park Lane Hilton for the London Stands With Ukraine march to Trafalgar Square.

It was not a typical anti-war crowd. With the conspicuous exception of Peter Tatchell, it lacked that class of seasoned protesters that fill out these occasions. Neither Stop the War nor CND, which both want the UK to stop arming the besieged Ukrainians, was behind the event. Instead it was the mayor of London, Sadiq Khan, who called for the protest, supported by the decidedly unradical European Movement (president: Michael Heseltine).

Rachel, a middle-aged woman wearing a Roger Waters T-shirt, said it was the first demonstration she’d ever been on. “I’m from East Molesey, near Hampton Court,” she said. “It’s not known as a hotbed of protest.”

She had come because she was upset and appalled by what was going on in Ukraine. “Maybe it’s naive, but I hope that if Putin sees enough of the world protest, maybe he will stop.” She pulled a face, as if to suggest that this was a long shot.

Navdeep Sadra, a student at UCL, had come, as he elegantly put it, “in decency”. He wanted to show solidarity with Ukrainians and with his friends in Belarus and Russia, who did not enjoy the same freedom to protest. He was aware of the argument, voiced by some progressive groups, that Ukraine should stop looking westwards and content itself with being a buffer zone operating within the Russian sphere of influence.

“It’s not for us to tell Ukrainians what to do,” he said, sounding wiser than his years. “It’s up to them to decide their own future.”

Moving towards the other end of the age scale, there was Melvyn Bragg, standing with his wife, Gabriel. Like many in the crowd, they believe Vladimir Putin felt emboldened to invade Ukraine because the west had remained passive in the face of his annexation of Crimea.

“He’s got us in this terror trap,” said Bragg, meaning that the underlying threat was nuclear escalation. “He is not going to push that button,” said his wife.

The hope must be that the Russians themselves can resist Putin’s strong-arm tactics. Among the protesters was Max, an IT worker who carried a placard that read “Russians against the war”. He said that he didn’t know anyone in the Russian community in London who was in favour of the war.

At home, he acknowledged, it was a different matter. “Because they don’t know the truth. They just watch the TV, and the information is completely controlled.”

Those who know the truth face arrest and imprisonment if they act upon it. Even in the safety of London, Max didn’t want to give his surname or other identifying details.

By the time the crowd started moving towards Trafalgar Square, it had swollen considerably. Nothing like the size of some the major protests London has seen, but big enough to take half an hour to pass. It was oddly quiet at first, a peace protest conducted in strolling silence. But the crowd found its voice in Piccadilly, when it came to a halt and the chant went up: “Stand with Ukraine!”

The words were repeated over and over, and with each repetition they grew more powerful and moving, until bystanders stopped and joined in. Many of the protesters said they wanted the Ukrainians to know that they were not alone, although a sunny day in London, with people going about their normal business shopping and sitting outside cafes, must seem an awful long way away to the inhabitants of Mariupol and Kharkiv.

They won’t necessarily appreciate the British gift for eccentricity and irony on view in the placards, one of which read “I am still disgusted”, identifying its carrier as “Disgusted of Tunbridge Wells”. And what of Richard Gail, a grey-haired football fan carrying a huge Ukraine flag with a Chelsea FC emblem? “I’d rather we were in the lowest league than be owned by an oligarch,” he said.

Perhaps such concerns would look a little local from a shelled-out apartment block. No doubt they’ll appreciate the profusion of blue and yellow flags, even if they might wish to have seen many more Londoners holding them. But then they will also know that it’s going to take a lot more than flag-waving to stop this particular war.