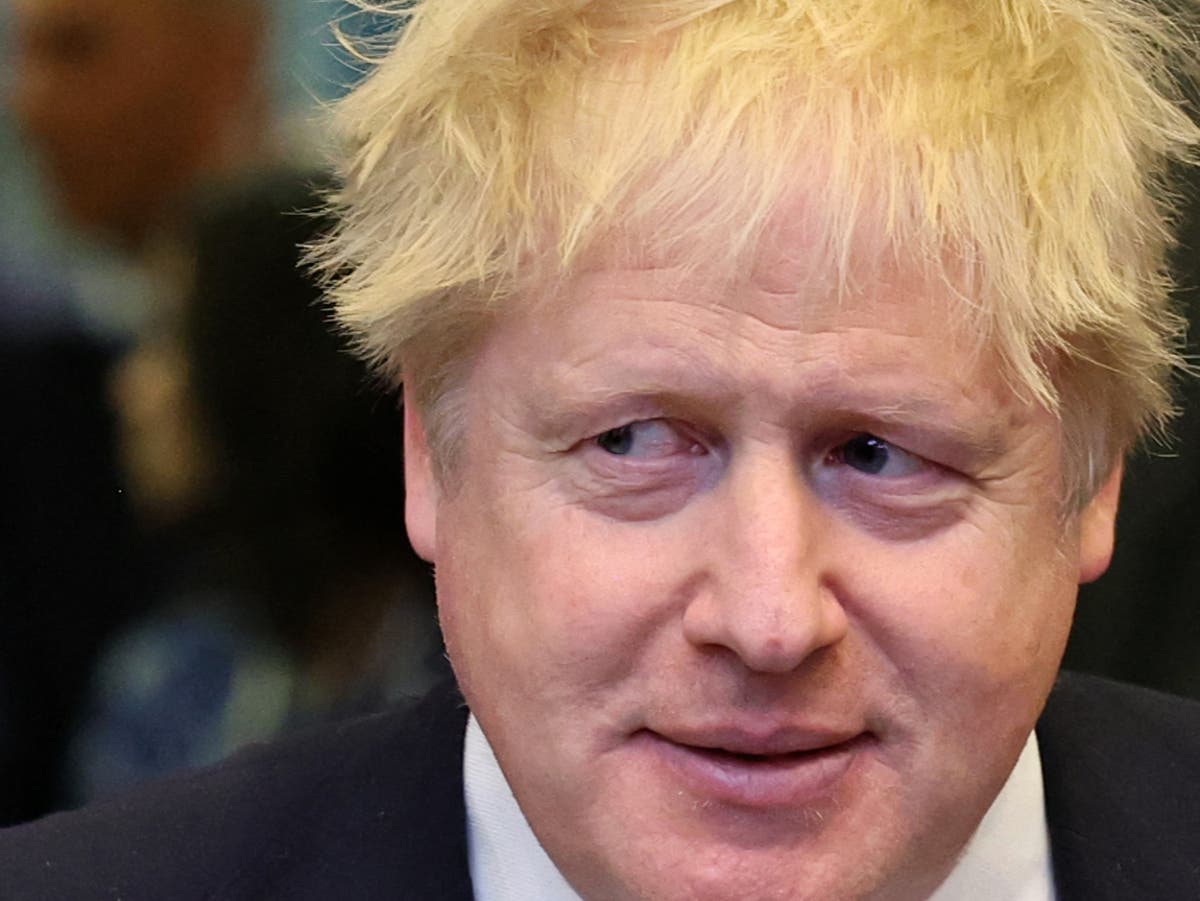 Boris Johnson has been told he is “pretty much toast” if handed a Partygate fine, as the prime minister endured a grilling from senior MPs on the Commons liaison committee.

At PMQs hours earlier, SNP Westminster leader Ian Blackford accused the Tories of “partying through the cost of living emergency” by attending a “champagne bash” on Tuesday night, days before an energy price hike hits millions of families.

The bereaved families of Covid victims chanted “shame on you” as Conservative MPs entered the dinner party at the Park Plaza hotel, which came as the Metropolitan Police confirmed an initial 20 Partygate fines, prompting renewed calls for Boris Johnson to resign.

Meanwhile, Michael Gove’s Homes for Ukraine scheme has faced scathing criticism. The Home Office has said just 2,700 visas have been granted to people hoping to come to the UK under the initiative – despite applications reaching 28,300.

Robina Qureshi, director of refugee homelessness charity Positive Action in Housing, said the “goodwill of British people is being poured down the drain.”

“We are disgusted and ashamed,” she said.

Tory MP Jamie Wallis, who became the first MP to come out as trans, has been receiving an outpouring of support, with the British prime minister promising Conservatives’ love and support.

But “the party really is divided over the issue”, Andrew Boff, a patron of the LGBT+ Conservatives group and member of the London Assembly, told PA agency.

Mr Boff said he hoped that Mr Wallis coming out will lead to a wider discussion of how trans rights are handled by the government.

In a tweet, Boris Johnson said Mr Wallis would “undoubtedly support others” and “the Conservative Party I lead will always give you, and everyone else, the love and support you need to be yourself”.

Mr Wallis on Wednesday revealed he was raped and blackmailed as he detailed a catalogue of traumatic incidents.

After two UK Supreme Court judges resigned from Hong Kong’s top court on Wednesday, British leader Carrie Lam said “here must be a lot of politics behind it”.

Addressing a press conference on Thursday, she said: “I remain very confident that we still have very fine judges in the judiciary, both local and from overseas. Hong Kong will continue to benefit significantly.”

The judges resigned on Wednesday over a sweeping national security law imposed by China that cracks down on dissent in the former British colony. The resignations were condemned by Beijing and the Hong Kong government.

Ms Lam said she was confident that all levels of the judiciary in the Asian financial hub would be free from political interference.

She said that Hong Kong’s controversial national security law did not prohibit overseas judges from serving and hearing security cases.

About 11,000 vacant military homes should be used to house Ukraine refugees, says MSP

Gordon MacDonald, a Member of the Scottish Parliament, has urged the defence secretary Ben Wallace to use about 11,000 homes vacant houses to Support Ukrainian refugees in “horrific situation”.

In his letter to Mr Wallace, the Edinburgh Pentland MSP said: “Other countries are already making good use of empty military housing, including the USA where eight military bases are currently being used to house Afghan refugees until permanent housing is made available.

“I am sure you would agree that if the choice is a family home or a hotel bedroom for months on end, then most people would choose a family home and I believe it would be a failure of the Ministry of Defence not to utilise these properties to provide a safe, warm home for displaced Ukrainian people.

“I would urge the MoD to take this forward as a priority, working with the Scottish Government and the local authorities.”

Boris Johnson has clashed with his deputy prime minister Dominic Raab over the Partygate scandal, by refusing to endorse the justice secretary’s admission that laws were broken in No 10.

Liz Truss, Britain’s foreign secretary, is due to arrive in India on Thursday to build diplomatic pressure on Narendra Modi’s government to reduce strategic dependency on Russia amid its invasion of Ukraine.

But her visit coincides with one by her Russian counterpart Sergei Lavrov, who is due to arrive in Delhi for a two-day visit on Thursday and Friday.

Ms Truss is expected to convey that Russia’s assault on Ukraine “underlines the importance of democracies working closer together to deter aggressors, reduce vulnerability to coercion and strengthen global security”.

A series of foreign officials, including from the US, UK and even Russia, are flying to India in a matter of days as Delhi is pursuing its traditional neutrality and abstained at several UNSC votes condemning the Russian invasion.

“Deeper ties between Britain and India will boost security in the Indo-Pacific and globally, and create jobs and opportunities in both countries,” she said before her visit.

“This matters even more in the context of Russia’s unprovoked invasion of Ukraine and underlines the need for free democracies to work closer together in areas like defence, trade and cybersecurity.

“India is an economic and tech powerhouse, the world’s largest democracy and a great friend of Britain, and I want to build an even closer relationship between our two nations.”

Putin is being lied to by his advisers about war, says British spy

Vladimir Putin’s advisers “are afraid to tell him the truth” about the situation in Ukraine, according to a UK spy chief.

In his first public address over the conflict, Sir Jeremy Fleming, head of Britain’s GCHQ spy agency, said Mr Putin had “massively misjudged the situation” and “overestimated the abilities of his military to secure a rapid victory”.

“It’s clear he misjudged the resistance of the Ukrainian people,” he said during a visit to Australia.

“He underestimated the strength of the coalition and his actions would galvanise. He under-played the economic consequences of the sanctions regime.”

Speaking about demoralisation among Russian soldiers, he said: “We’ve seen Russian soldiers – short of weapons and morale – refusing to carry out orders, sabotaging their own equipment and even accidentally shooting down their own aircraft.

“And even though we believe Putin’s advisers are afraid to tell him the truth, what’s going on and the extent of these misjudgements must be crystal clear to the regime.”

He added: “It’s become his personal war, with the cost being paid by innocent people in Ukraine and increasingly, by ordinary Russians too.”

He warned China not to become “too closely aligned” with the Kremlin.

Labour is calling for the UK to agree a security pact with the EU following the wake-up call of the Ukraine invasion.

It’s part of the party’s drive to “make Brexit work”.

Boris Johnson must end his “petty diplomatic spats with our neighbours” and rebuild relationships, Labour says.

The Conservative Party is increasingly becoming an “English nationalist party” that does not understand what is happening in the devolved nations, a Northern Irish MP has said.

In an interview with GB News to be broadcast on Thursday, DUP MP Ian Paisley Jr said though his natural allies in Westminster should be the Tories, he found Labour gave Northern Ireland a “far better deal”.

Mr Paisley said: “Yes, the Conservatives call themselves the Conservative and Unionist Party, but I believe that the Conservative Party today is becoming more and more an English nationalist party that doesn’t really understand what’s going on in Scotland, certainly in Northern Ireland, and in other regions.”

Families set to be £2,620 worse off on Tories’ watch, Labour claims

Labour is set to launch its local election campaign with a focus on the spiralling cost of living, as it publishes new research suggesting families are set to be poorer to the tune of £2,620 under the Conservatives’ watch.

Leader Sir Keir Starmer says his party would cut people’s energy bills by up to £600, funded by a windfall tax on oil and gas companies.

You can read the full story below.

Boris Johnson has publicly mocked the weight of the Scottish National Party’s Westminster leader for a second time in two months – after previously being accused of “body-shaming” him.

Is it you? Lucky UK ticket-holder wins record-breaking £184m on EuroMillions