Investigators believe the two men who gunned down a nurse in the driveway of her northwest London home last fall travelled from the Toronto area and immediately fled the city after the homicide. 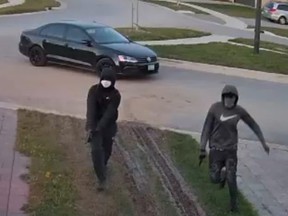 London police have published this image of two suspects in the Sept. 10, 2021, shooting death of London nurse Lynda Marques at her upscale northwest London house. (Photo supplied by London police)

Investigators believe the two gunmen who shot a nurse in the driveway of her northwest London home last fall travelled from the Toronto area and immediately fled London after the homicide.

Lynda Marques, 30, was gunned down while she was parked in the driveway of her upscale home at 2229 Wateroak Dr., northwest of Fanshawe Park and Wonderland roads, shortly before 8 p.m. on Sept. 10, 2021.

No arrests have been made in the case — one of just two unsolved city homicides in the past decade — but police released new information Tuesday, including a photo of the suspected gunmen, and renewed their appeal to the public for tips.

“Since the time that Lynda was tragically murdered, this has been an investigation that has continued non-stop with significant resources. I can tell you that we’ve made good progress in this investigation and we’re continuing to move it forward,” Det.-Insp. Alex Krygsman said in an interview.

“We believe that there are people out there who know additional details that would help us, about why Lynda was murdered and who was involved . . . We would like to hear from them.”

The black Volkswagen Jetta used by the suspects had been stolen from Bluffers Park and Beach in Scarborough on Sept. 5, 2021, police said. The car was recovered five days later on Meadowlilly Road South, 18 kilometres from the crime scene.

Investigators believe the people involved in the homicide are from the Greater Toronto Area and travelled to London on Sept. 9 and returned to the Toronto region the next day, immediately after Marques was killed, police said.

Police also released an image showing two males, both holding handguns and wearing dark clothing and masks, appearing to run toward Marques’s house. The black Jetta can be seen on the street behind them.

“These are not the only two people that we believe are involved in Lynda’s murder . . . There are other people involved as well,” Krygsman said.

Police didn’t say where the images were taken, but the Marques house is outfitted with multiple surveillance cameras.

Investigators renewed their appeal for information from the public about the identities of the two gunmen, and the movements of the Jetta on Sept. 9 and 10. Anyone with information should call London police at 519-661-5670.

Police have called the homicide a targeted killing, but family and friends of Marques have questioned why a nurse with a young child, and no criminal record, would be ambushed outside of her home.

“We’re not prepared to speak to the specifics of evidence, including the motive,” Krygsman said.

Marques, who studied nursing at Centennial College and then Ryerson University, worked at St. Thomas Elgin General Hospital before starting her own medical esthetics business in London, performing cosmetic filler injections and other procedures as a medical esthetics nurse.

She lived at the two-storey home in London’s Fox Hollow neighbourhood with her longtime partner, Ali Bhatti, and their one-year-old son. 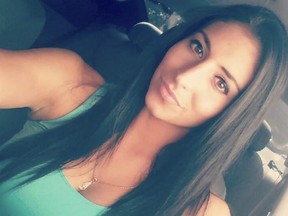 Lynda Marques was fatally shot by two gunmen in a parked car outside her house in northwest London on Sept. 10, 2021.

Bhatti, 28, has been in jail since he was arrested on Jan. 6, when police say they pulled over a vehicle near Wonderland and Farrah roads and seized two loaded handguns. Investigators later searched a home on Wateroak Drive, where they seized cocaine and other drugs, police said.

Justice of the peace Frank Leddy denied bail to Bhatti, who is being held at the Central North Correctional Centre in Penetanguishene, a town northwest of Barrie.

Bhatti, who was already on bail at the time of his arrest earlier this year, is also facing charges of drug possession for the purpose of trafficking in a separate case that’s scheduled to go to trial in the Superior Court of Justice on Nov. 22.

Neighbours say nobody has been living in the Wateroak Drive home, where the front door shows signs of a forced entry, since Bhatti’s arrest. 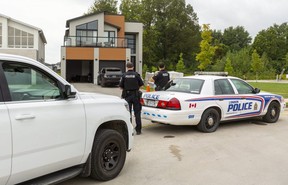 London police guard the scene of a shooting at 2229 Wateroak Dr. in northwest London where Lynda Marques, a nurse, was killed. Photo taken on Sept. 10, 2021. (Mike Hensen/The London Free Press)