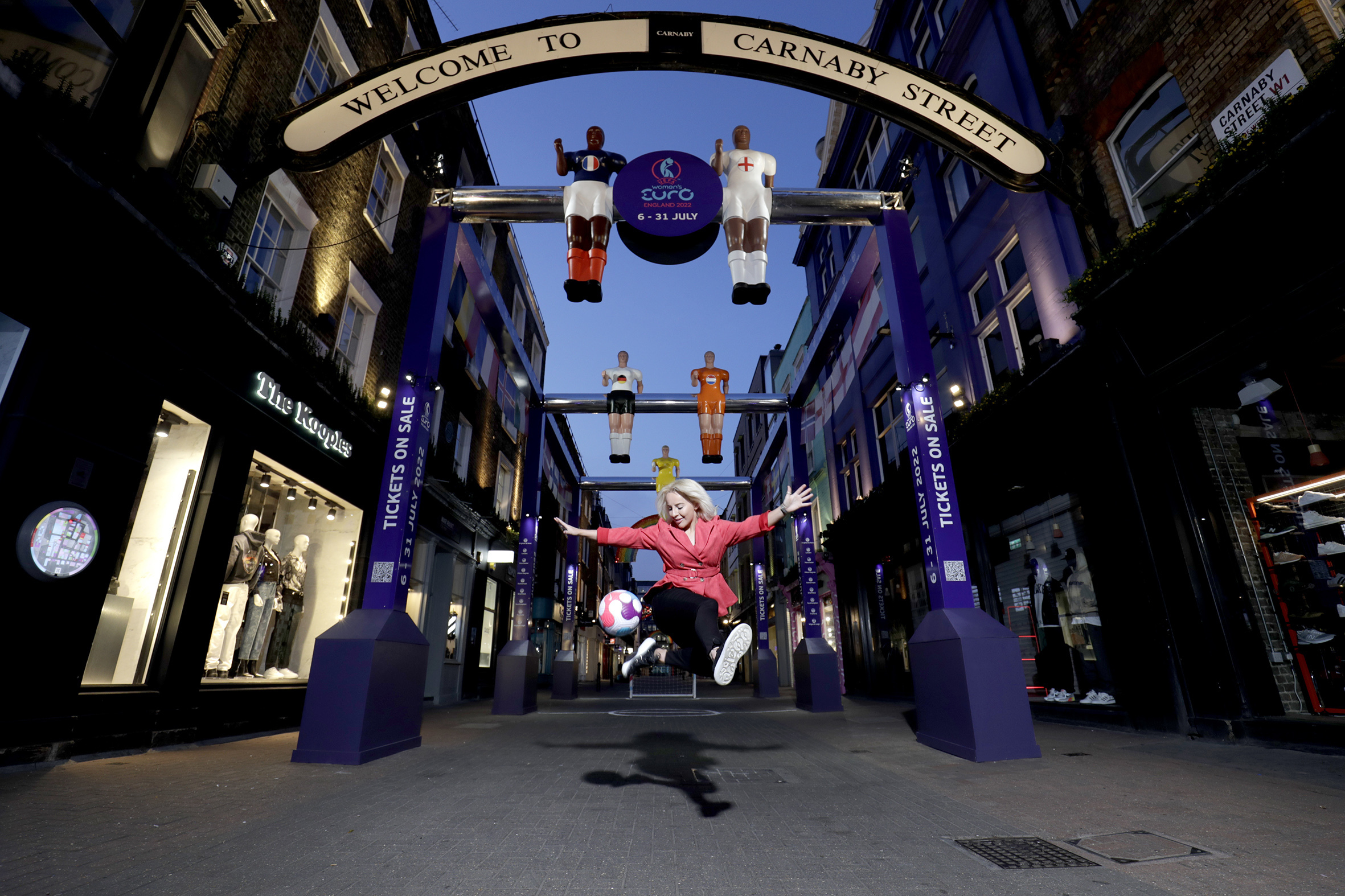 Carnaby Street is no stranger to an installation or two, and its latest makeover is a sign that football is, indeed, coming home. To celebrate 100 days until Uefa Women’s Euro England 2022, the iconic shopping promenade has transformed into a giant table football game.

The player models are nine feet tall, suspended five metres above the ground all along Carnaby Street and, unlike on a traditional table, all women. There’s also a regular-sized table football game on the ground that anyone who finds themselves walking down Carnaby Street can play for free.

The installation was unveiled yesterday (March 28), to coincide with tickets to games in the tournament going on sale, by a bunch of football legends including Rio Ferdinand, Millie Bright, Jess Carter, Fara Williams, Kenza Dali, Elz the Witch and Ann-Katrin Berger.

A team of giant female football players bobbing above shoppers’ heads definitely signposts just what a major deal the Women’s Euros are going to be. With 16 nations taking part in the tournament, 31 games will be played at ten venues around England, including in Brighton, Manchester, Milton Keynes and, naturally, London.

Ticket-wise, the European Championship, which was due to take place last year but was postponed due to the pandemic, is looking to be a record-breaking event, surpassing 2017’s tournament in the Netherlands. In fact, demand is so high that more than half of the 700,000 tickets available have already been snapped up in various pre-sales, public ballots and group bookings.

In a statement, Chris Bryant, the tournament director for Uefa Women’s Euro 2022 said: ‘This is an opportunity to open up women’s football to new audiences. We wanted to make a bold statement and the installation in Carnaby Street is evident of that.’

The Women’s Euros kick off on July 6 at Old Trafford in Manchester with a match between England and Austria. And with tickets already selling almost as fast as Ellen White can score a goal, this is one sporting event that you don’t want to miss.

The giant table football installation on Carnaby Street is in place until Apr 10 and is free to visit. Tickets for Uefa Women’s Euro 2022 are on sale now.

There’s an opera about football heading our way.

How to help the people of Ukraine if you’re living in London.