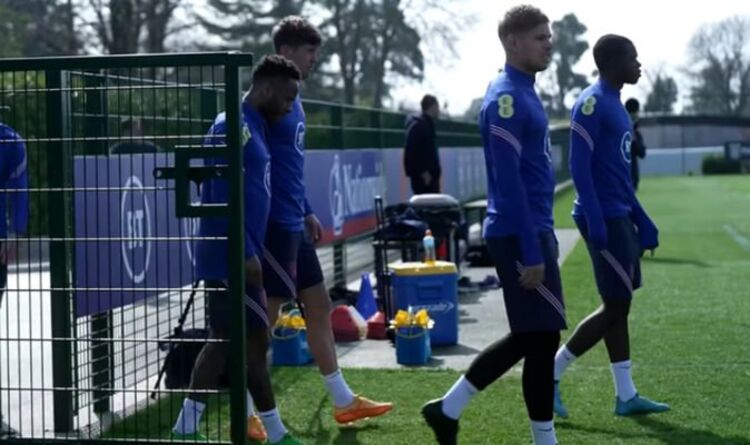 Arsenal fans have been aiming fun at their fierce north London rivals Tottenham Hotspur over Emile Smith Rowe’s expression as he walked onto the club’s Hotspur Way pitch during England training. The Three Lions have been preparing for tonight’s friendly clash against the Ivory Coast in north London.

Smith Rowe has enjoyed his most productive season as an Arsenal first-team star in 2021/22 after inheriting the iconic number 10 shirt. The 21-year-old attacking midfielder has registered 10 goals and two assists whilst not being a sure starter under Mikel Arteta.

England manager Gareth Southgate rewarded his form with a third international call-up as preparations for the 2022 Qatar World Cup commenced. The Gunners ace was selected over the likes of Marcus Rashford and Jadon Sancho, indicating Southgate’s faith in his ability.

But Smith Rowe, Arsenal born and bred, didn’t look best pleased as he was captured walking onto Tottenham’s training pitch in the build-up to the Ivory Coast’s visit. And supporter @b0rklaser_ made sure to point it out on Reddit, prompting plenty of comedic discussion amongst his Arsenal brethren in the comments.

@Danger_Lab_NNN joked that it “probably smells like Spurs”, whilst @NegativeHeli made a rather flattering comparison to Hotspur Way. They wrote: “Entering the Spurs training ground is like going to a landfill because that’s what they are.”

Smith Rowe could earn his third England cap in tonight’s game against the Ivory Coast at Wembley Stadium. The Hale End graduate missed training with a knock ahead of Saturday’s 2-1 friendly win against Switzerland and, as a result, faced exclusion from Southgate’s squad.

However, after full-time, the England boss confirmed Smith Rowe was set to train on Sunday, and the Reddit image seemingly confirms he is back in action.

He said: “Emile did some work with the fitness team today, so there’s a chance he’ll do some of the training session (on Sunday),” said the England boss. He is the only other one we have got any flags on.”

Want the latest Premier League news as we publish it on Express Sport? Join our brand new Facebook group by clicking here.

UK road wars rev up ahead of local elections – POLITICO