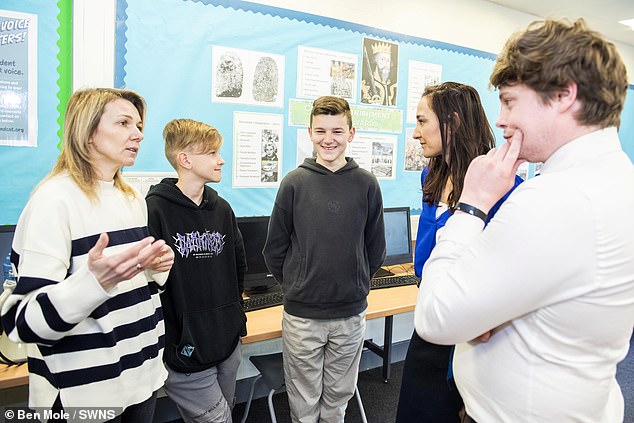 Two Ukrainian brothers, who fled Kyiv on the day Russian forces invaded their country last month, have spent their first day as pupils at a UK school in east London.

The Kyrychenko family boys – Vlad, 14 and Roman, 12 – have said they can’t wait to make new friends and join the football team at Cumberland Community School in Forest Gate even though they miss their home.

The pair – along with mother Oksana, father Dmytro and younger brother Tymofii, 4 – crossed the border into Poland after a ten-hour queue with thousands of other refugees fleeing the war-torn nation.

They drove across Europe, travelling through Germany and France, and arrived in the UK via Ireland at the beginning of this month.

The family has since applied for asylum, and are now living in one room at a hotel in east London.

Mayor of Newham Rokhsana Fiaz helped the family with getting places at the school, and the boys had their first day on Thursday. 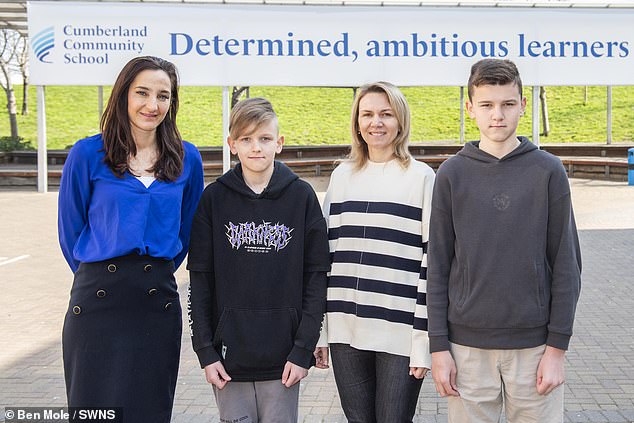 From left to right, Ms Brown next to Roman, his mother Oksana, and brother Vlad, at Cumberland Community School

Vlad and Roman were also given brand new uniforms, laptops and books paid for by the school, which is part of the Community Schools Trust and has helped more than 20 students win millions of pounds worth of places at top institutions, including Eton College.

The hotel manager where the Kyrychenkos are currently staying put the family in touch with a volunteer, who then put them in touch with Newham’s mayor.

They were then assigned Cumberland Community School by the admissions team at Newham Council.

Oksana visited the school when she was a student in her 20s and has expressed her relief that Vlad and Roman can now ‘have some normality’.

She said: ‘For me, this is a big relief to have my children in this school.

‘I have been so nervous and upset since leaving Ukraine, but this is a big moment because they now have somewhere to go each day and have some normality. 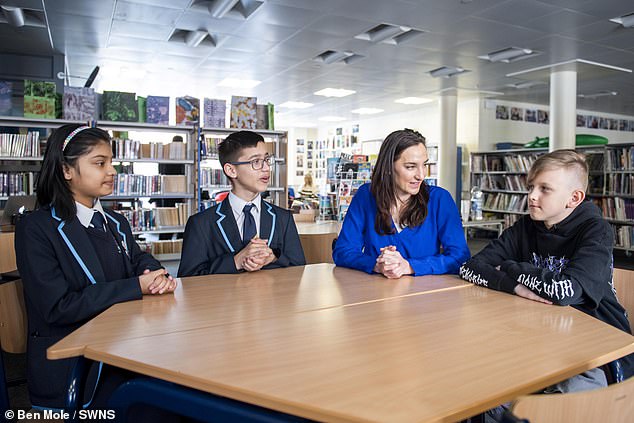 From left to right: Students Rani Hossain and Antonio-Valentin Cranga with Ms Brown and Roman

‘I cannot express my thanks for what this school and the people have done for our family.

‘I didn’t expect all that they have given us. Laptops, uniforms and books, it is so much.

‘I have said that my boys will be the most respectful best students at this school and will do their work. I will make sure of this as their mother.

‘I can’t compare my life now here to my family and friends back home in Ukraine, who are sleeping in basements or on the floor in corridors with their children because they don’t want to be near the windows because of bombs.’

The boys’ father Dmytro, who left before men were banned from leaving the country, had his own company – which manufactured and installed swimming pools for rich clients – with 20 members of staff.

The family lived in a large flat in the centre of Kyiv, and enjoyed luxury holidays abroad twice a year, including ski trips and holidays in the Dominican Republic and Barcelona.

The children were privately schooled and had a holiday home 30 miles outside Kyiv. 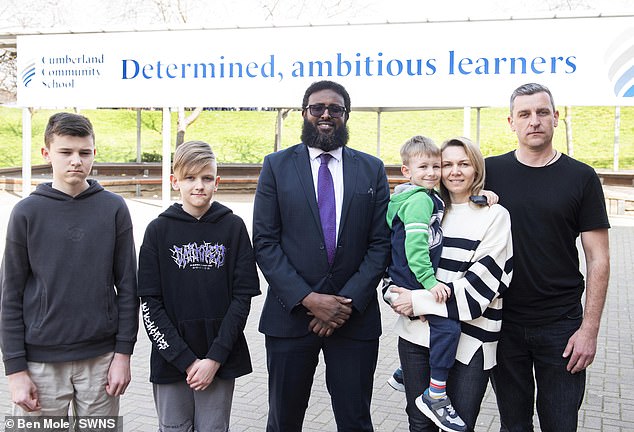 Dmytro said: ‘It is very hard to imagine that I would ever be a refugee from my own country and living in another country after leaving Ukraine.

‘Now we are here, we are so grateful for the support of the British people. They have been so kind: everywhere we have gone they have helped us.

‘The mayor of Newham, Rokhsana Fiaz, personally helped us which is how we are able to get into this great school.’

He added that while he is grateful for all the help his family received, all he wants ‘to do is go home’.

On leaving Ukraine, Dmytro said: ‘I left my mother and sister and niece and nephew, my wife left behind her family too.

‘I wanted to get all of them out. My nephew is 23 and he has to stay to fight; my sister will not leave him behind. 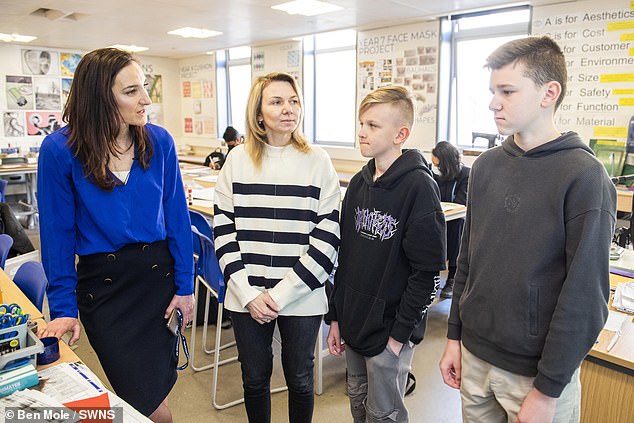 Ms Brown (left) next to Oksana and her sons Roman and Vlad, who had their first day at the school on Thursday

‘Everyday we hear stories of families sleeping in corridors, in basements, anywhere away from the guns. Sirens go off seven or eight times a day.

‘I feel so sad for the people left behind who are scared of losing their loved ones. The Russian army don’t care who they kill; children, to them? It doesn’t matter.

‘The children want to go home and be with their friends, but we don’t know if we have a home left. Lots of our friends are there, we don’t know what will happen.’

He added: ‘I am so grateful to the British government and people for their kindness and welcoming me here, but all I want to do is go home.

‘I pray this war is over soon, but I don’t know.

‘I spent 18 years building up my business. Every time I made anything I would put it into my business, but now all that money, all the hard work and the effort, and I don’t know what will happen.

‘Even though everything is very hard for me, I know for the people left behind it is so much harder. My family are safe, that is all that really matters.’

Vlad said: ‘I can’t wait to start making friends, and I want to join the football team at this school. I think it will be the same as school in Ukraine.

‘I will miss my friends at home, but I am sure I can make new friends here at this school. Everyone has been really nice to us so far.’

Roman added: ‘I am very happy to be given a place at such a nice school.

‘My family are very happy to be in England and to be going to school.’

Cumberland Community School headteacher Omar Deria said the new students will get one-to-one English lessons, extra lessons to catch up on studies and support with well-being and mental health. 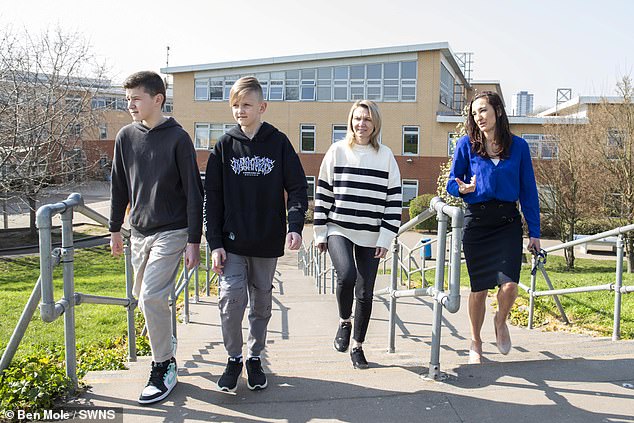 From left to right: Vlad, Roman, Oksana and Ms Brown. The brothers were given brand new uniforms, laptops and books paid for by the school

He added: ‘When we were asked to take students from Ukraine we did not hesitate, we offered our support straight away.

‘These students will have a range of services available to them, whatever they need we can offer them.

‘We will also have all the emotional support they need, counselling services are available on site at the school. This is not just the students but also their family.’

The family got a ferry to Dublin from Calais and made their way to Belfast that same day.

Then the Kyrychenkos took a ferry to Liverpool, from where they drove to London in the same car they took from Ukraine.

They sought asylum at the Home Office building in Victoria and have since been staying at the Ibis Hotel in Customs House, east London.

Mum and partner accused of causing baby’s death in Dagenham