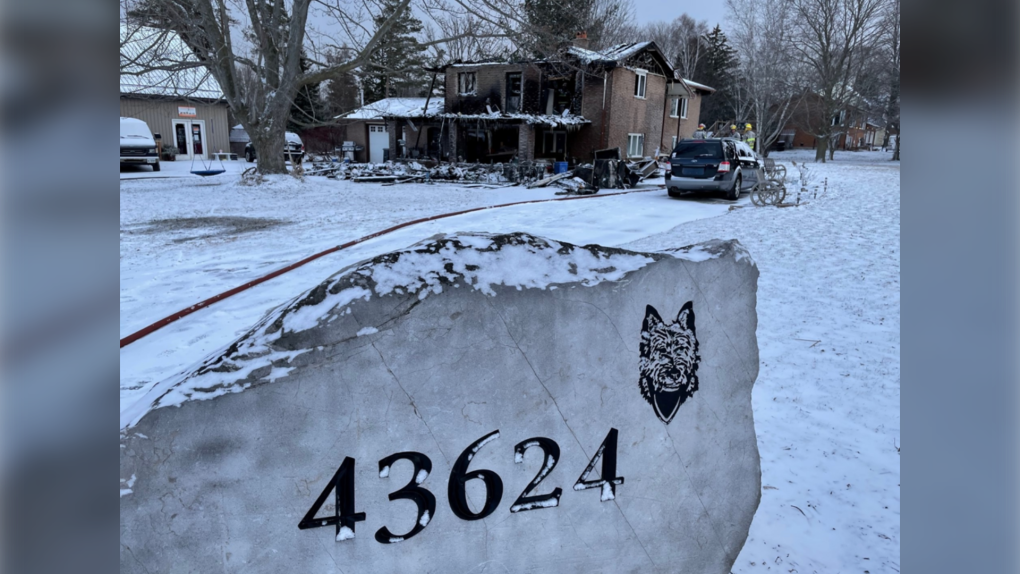 Liz Dieleman, who resides at 43624 Sparta Line says she was alerted to immediately leave her home of 13 years shortly before 5:30 a.m.

“My husband got up and went to the furnace room. He yelled at me to get up and said, ‘The house is on fire!’

At the same time, a motorist alerted emergency services.

“The call was from a 911 caller driving by. They saw the fire on the porch, and by the time we saw it, it was into the house and the roof and the attic. Flames coming out the windows and the roof.”

Fire crews spent 30 minutes containing the blaze, first outside than inside the structure.

Thankfully, they already knew all the occupants and two dogs were out of the house.

But as CTV News arrived, Dieleman and her daughter Jenny were trying to find two missing cats.

As we rolled, Jenny came out of the burnt-out home carrying one, Daisy, in her arms.

The discovery, and knowing her father and boyfriend were recovering successfully in hospital from smoke inhalation, had her smiling during an otherwise devastating day.

Joe Ward, the incident fire commander at the scene, tells CTV News damage to the home is extensive, but he could not yet say whether or not the structure is salvageable.

A cause is also undetermined, but Ward knows the fire began in the covered porch area.

Given the speed of the fire, he says smoke detectors played a vital role in the quick exit of the residents. He says had they not sounded, his crews might not have arrived fast enough to get everyone out.

“Could have been a different situation altogether, yes,” says Ward.

Liz echoes those thoughts. “Thank God for smoke detectors”, while adding a key message for others, “If you don’t have a smoke detector in your house, get one, and check your batteries.”

Still thankful for escaping uninjured, she says, “we can rebuild our home.”