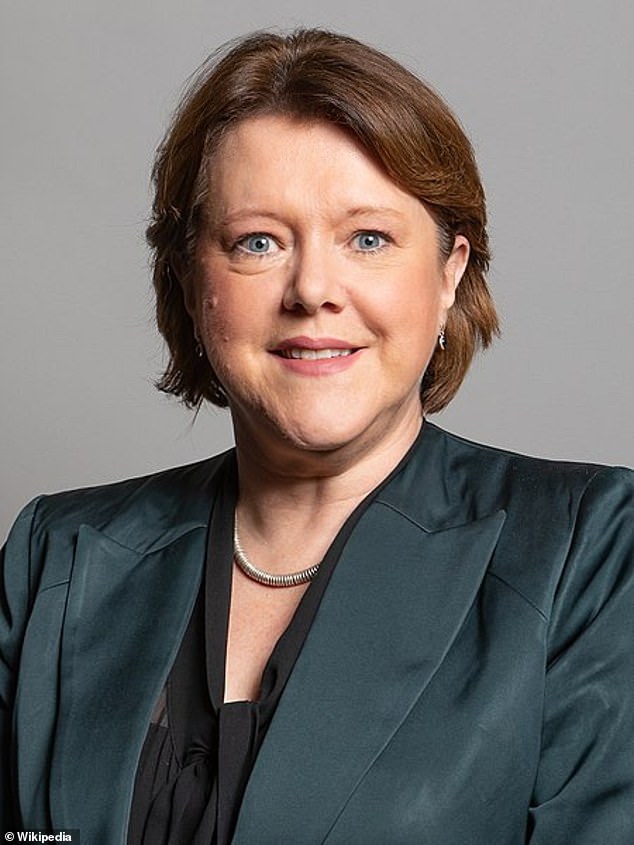 A Conservative MP who was cyber-flashed while on a busy train to London revealed she has become accustomed to a ‘regular bombardment of online verbal abuse, rape, and even death threats’.

Basingstoke MP Maria Miller, 57, recalled the moment she received an unsolicited explicit image without consent of a man’s genitalia by someone she was sharing a packed train with to Waterloo station.

The 57-year-old also hailed the Online Safety Bill, which was introduced in Parliament last week and called it ‘a ground-breaking piece of legislation’ that will ‘hold tech giants to account for the first time’.

‘Like any other commuters to Waterloo you don’t want to see a picture of a penis when you are on a packed train. It was someone on the train with me and I wondered who it was.

‘This law will make it against the law and the same offence as flashing. I think women expect this to already be in place.’

Cyber-flashing is when a person is sent an unsolicited sexual image on their mobile device by an unknown person nearby through social media, messages or other sharing functions such as Airdrop. In some instances, a preview of the photo can appear on a person’s device, meaning that even if the transfer is rejected, victims are forced into seeing the image.

Tory MP Maria Miller (pictured) who received a cyber-flashing image of a man’s genitalia whilst on a train to London said she is accustomed to a ‘regular bombardment of online verbal abuse, rape, and even death threats’

Ministers confirmed last week that sending unsolicited sexual images to people via social media or dating apps will become a criminal offence. The measure will be added to existing plans to beef up online protections.

The move comes after research found that three-quarters of girls aged 12 to 18 had been sent unsolicited nude images of boys or men. A Law Commission review, Modernising Communications Offences, recommended that a new offence be created.

The new legislation will apply to England and Wales – with the act being made illegal in Scotland 12 years ago.

Officials said the law change would mean anyone who sent a photograph or film of a person’s genitals, for the purpose of their own sexual gratification or to cause the victim humiliation, alarm or distress, could face up to two years in prison. 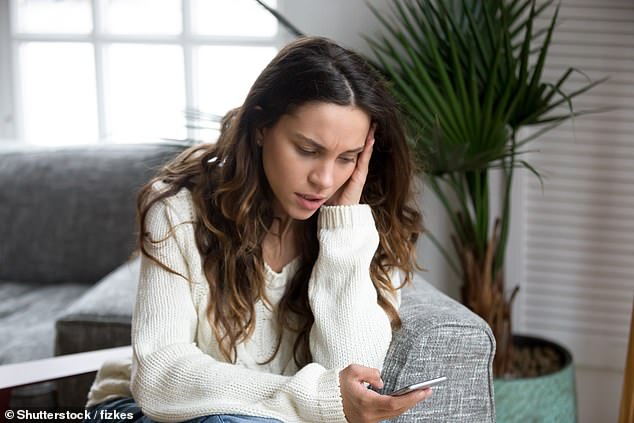 Cyber-flashing is when a person is sent an unsolicited sexual image on their mobile device by an unknown person nearby through social media, messages or other sharing functions such as Airdrop. In some instances, a preview of the photo can appear on a person’s device, meaning that even if the transfer is rejected, victims are forced into seeing the image (file image)

Cyber-flashing is the act of someone deliberately sending a stranger an unsolicited sexual image using the AirDrop feature on an iPhone. These images are typically of male genitalia.

AirDrop, which is specific to iOS devices such as iPads and iPhones, as well as Apple Macs, uses Wi-Fi and Bluetooth to connect over a short range to other devices.

People are often targeted by cyber-flashing through AirDrop on public transport due to the technology’s short range.

Cyber-flashing was criminalised in Scotland under Section 6 of the Sexual Offence in 2009, while a similar measure was also passed in the Texas Senate unanimously in May 2019.

Police investigated the first ever case of cyber-flashing in 2015 after an unwanted graphic picture popped up on a shocked London commuter’s iPhone.

Ms Miller said the new legislation will ‘stop people breaking the law without being punished’.

Speaking to the Basingstoke Gazette, she added: ‘We know that women MPs receive twice the level of abuse that their male counterparts so there are societal issues that we have to tackle where abuse towards women is more common than abuse towards men.

‘People are hiding behind the fact that for too long the online world has been a place where people who break the law can exist without being punished. It won’t stop people having controversial ideas and sharing them online but it would stop people who do harm others from doing so.

‘[The bill will] finally grasp the nettle of online abuse, to create a safer, more respectful online environment, that will lead to a kinder politics too.

Speaking about the bill, Digital Secretary Nadine Dorries said: ‘Tech has the power to bring people together and make our lives better, but it can also enable heinous behaviour from those who wish to abuse, harm and harass.

‘The forthcoming Online Safety Bill will force tech companies to stop their platforms being used to commit vile acts of cyber-flashing.

‘We are bringing the full weight of the law on individuals who perpetrate this awful behaviour.’

Justice Secretary Dominic Raab added: ‘Protecting women and girls is my top priority, which is why we’re keeping sexual and violent offenders behind bars for longer, giving domestic abuse victims more time to report assaults and boosting funding for support services to £185 million per year.

‘Making cyber-flashing a specific crime is the latest step, sending a clear message to perpetrators that they will face jail time.’