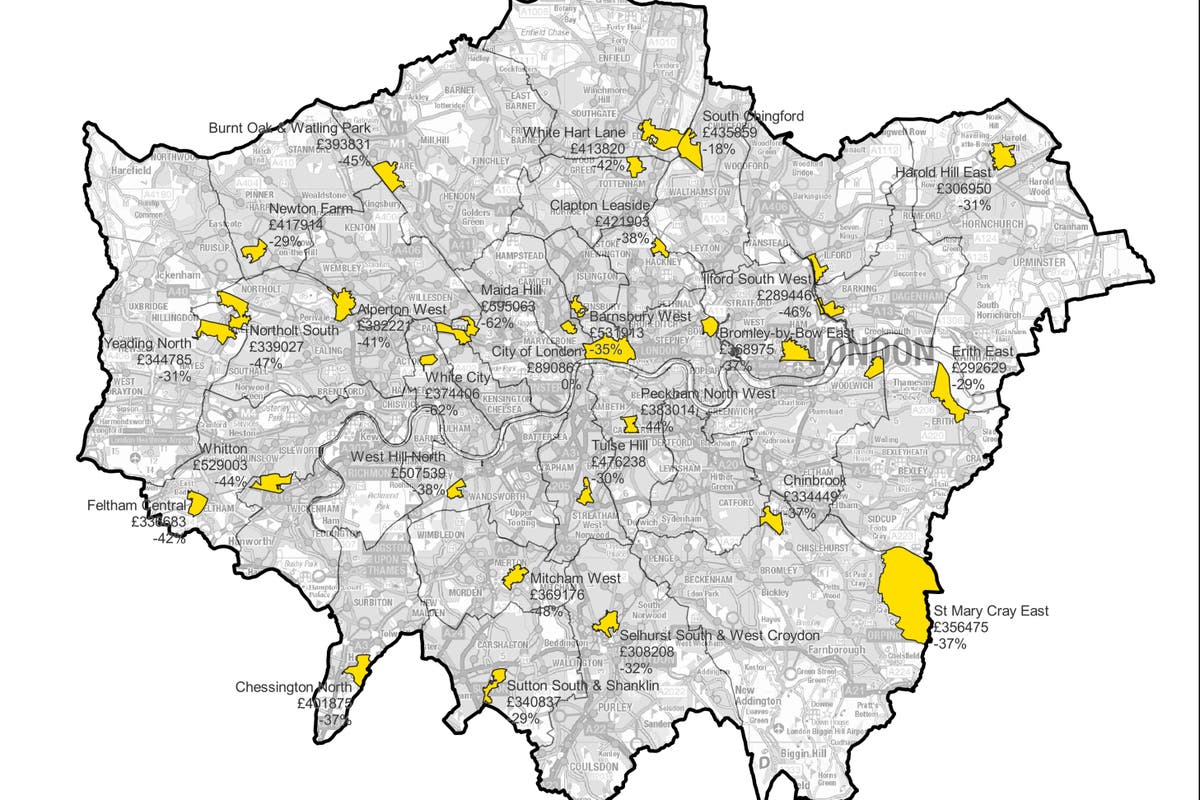 ouse prices grew faster than earnings in 91 per cent of local authority districts, making homes less affordable in most parts of the UK, according to a report from the ONS.

The problem is even more acute in parts of London, where the country’s most expensive boroughs are found.

But despite a current average asking price of £664,000 in the capital, exclusive research by Savills for Homes and Property has identified 20 of London’s 33 boroughs which have areas where the average house price is less than £400,000. All but two boroughs contain areas with average home values below £600,000.

The estate agent compared house prices in small areas with the average value of property in the borough they sit within to identify the best pockets of value in London.

Lawrence Bowles, director in Savills research team, said: “London house prices are high compared to the rest of the country and affordability is stretched in many parts of the capital.

“But, our analysis shows there are still some pockets where values are much lower than the borough average.

The London neighbourhoods where homebuyers can save millions

The biggest ‘bargain’ neighbourhood was in London’s most expensive borough, Kensington & Chelsea, where the average house price is in excess of £2.2 million. But in the Golborne & Swinbrook area of North Kensington, the average home sells for £716,000 — a full 68 per cent less.

The area has long been a popular choice for those priced out of Notting Hill proper and the area became linked with David Cameron who lived there before he became PM.

At the top end of Portobello Road and in the shadow of the Westway the neighbourhood is home to Portuguese and Moroccan cafes, second hand furniture shops and some of central London’s least expensive homes — at least in relation to those nearby.

Erno Goldfinger’s iconic Trellick Tower is the design-lover’s choice in the area, although flats to buy in the block are a rarity because the building is still majority council housing. A property in the block was recently on the market for £675,000.

Kiren Awan, sales manager at Winkworth’s North Kensington branch, said the Golborne & Swinbrook area was the “cheapest postcode in the royal borough” and benefits from relatively low council tax and parking permits, which allow residents to park in bays anywhere in the borough.

“It’s very creative, very arty and with plenty of independent shops and a real mixed community. If you are wanting to get on the property ladder you can find a three-bed ex-council house for around £535,000, so its very much a bargain basement in comparison to the rest of Kensington and Chelsea,” said Awan.

£475,000: a three-bedroom ex-council flat on the White City Estate for sale through Dexters

The next biggest in-borough savings can be found in neighbouring Hammersmith and Fulham, average price £982,000. However, buying in White City costs almost a third of the borough average, at £374,400, a 62 per cent saving.

Near Shepherd’s Bush but previously best known for being home to the BBC Television Centre, the area is in the midst of major change. The Television Centre has been turned into luxury flats with new shops and restaurants underneath and a branch of Soho House, White City House on site.

£599,950: this two-bedroom flat for sale on Bravington Road, W9, through Hamptons

In Westminster, looking in Maida Hill to the west of St John’s Wood, could save you half a million pounds, with house prices a huge 62 per cent below the borough average of £1.5 million.

There are a good selection of period homes in attractive red-brick mansion blocks and Victorian conversions, as well as easy access to Little Venice and the Regent’s Canal.

Julian Reebak, co-founder of independent agent Compton Reeback in Maida Vale, agreed Maida Hill was a “pocket” of good value. “It’s hard for first-time buyers to get in on central Maida Vale, but they do have a chance if they look in Maida Hill. It’s got great transport links into the city and there are also still a few houses for families looking for more space and an outside area.”

£550,000: a one-bedroom flat on Wilmington Square, through Winkworth

The eastern part of the neighbourhood is on the rougher side, with lower house prices to match. The average home here will cost £509,000, compared to a borough average in Camden of £1.2 million.

Alex Taniewski-Elliot, senior manager at Bloomsbury branch of Fyfe McDade, said the area was even more attractive thanks to the regeneration of areas like Kings Cross, home to the Thomas Heatherwick-designed shopping centre Coal Drops Yard.

With 10 universities, Bloomsbury is always top of the list for student rentals meaning buy-to-let investors are “well buffered”.

As for where the best bargains are, Taniewski-Elliot said there was a small patch around Margery Street just off the Kings Cross Road where house prices dip. “As ever, buyers will have to do their homework, but we recently had a three-bed split level flat in that area on for £950,000. That would easily go for £1.3 million in central Bloomsbury.”

For those ready to head to the suburbs, the leafy south-west London borough of Merton is a popular choice.

Areas like Wimbledon are expensive but in Mitcham, just three miles south-east, the research data shows buyers could save nearly £350,00.

In Mitcham West, the average house price is just £369,00 compared to the borough average of £709,000. With a recent influx of investment by local housing associations and an 18 minute train ride into Victoria Station, this the part of Merton to find a deal in.

The cheapest area in every London borough

Warburton confirms he is set to leave QPR