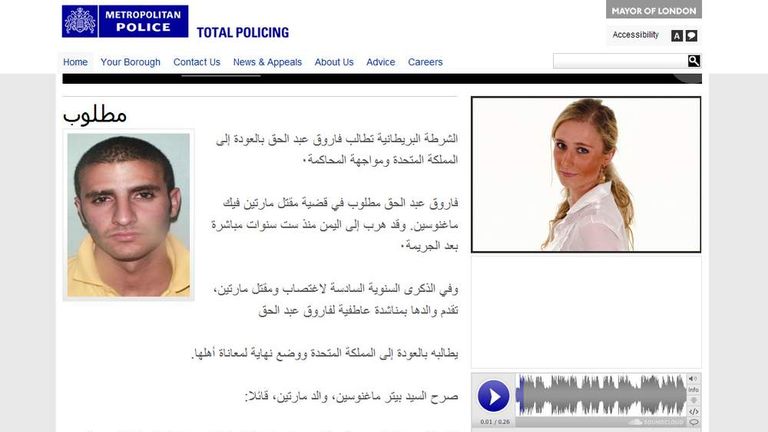 Detectives investigating the rape and murder of a Norwegian student in London in 2008 have arrested a woman in her 60s, as they continue to appeal for a billionaire Yemeni playboy to return to the UK.

Martine Vik Magnussen, 23, was found dead among rubble in a basement in Great Portland Street after a night out.

She and her friends had been celebrating finishing their end-of-term exams at the Maddox nightclub in Mayfair in London, but Ms Magnussen vanished and her body was found two days later.

On Wednesday, the Metropolitan Police said officers had arrested a woman aged in her 60s on suspicion of assisting an offender.

Yemeni citizen Farouk Abdulhak, who fled to Yemen within hours of her death, is urged to return for questioning in connection to the death.

He has been a wanted man in the UK for more than a decade.

Image:
An image of the Met Police website appeal in Arabic for Farouk Abdulhak

‘Abdulhak should be aware that this matter has not, and will not, go away’

Detective Chief Inspector Jim Eastwood said: “Martine’s family has never given up their fight for justice and in the 14 years since her death they have campaigned tirelessly to keep her in the public consciousness.

“Martine’s family has been informed of this latest development. Though it represents a positive step, there is still much more work for us to do.

“Most importantly, Farouk Abdulhak should be aware that this matter has not, and will not, go away.

“My team and I will continue to seek justice and use all opportunities available to pursue him and bring him back to the UK. His status as a wanted man will remain and we will not cease in our efforts to get justice for Martine’s family.

A post-mortem examination gave Ms Magnussen’s cause of death as compression to the neck, and in November 2010 an inquest recorded a verdict of unlawful killing.