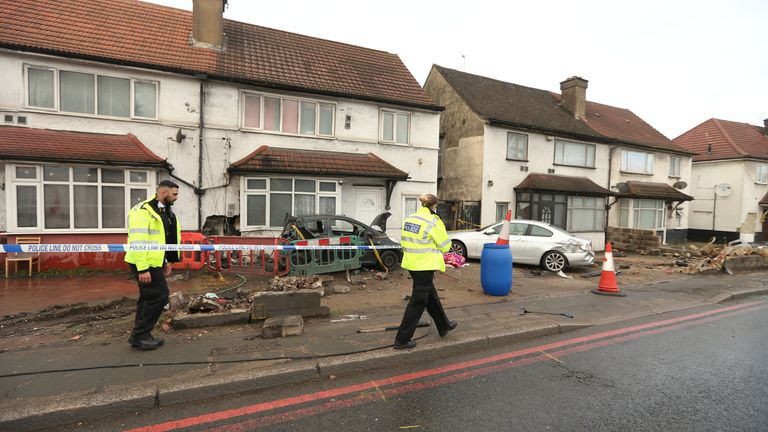 A pedestrian has been killed and a man is in a critical condition after a car crashed into a house in northwest London.

The victim, a man in his 30s, was hit by a BMW before the vehicle crashed into the house, causing “significant” structural damage.

A man in his 40s has been arrested on suspicion of causing death by dangerous driving, the Metropolitan Police said.

Enquiries are ongoing to find the victim’s family, who are believed to be overseas.

The collision happened on the eastbound A406, the North Circular Road, in Neasden just after 9.45pm on Friday.

Image:
Police at the scene of the crash as an appeal is launched for witnesses

The driver is being treated in hospital where his condition has been described as “non-life threatening”.

A man in his 50s who was a passenger in the car is fighting for his life.

Lane closures remain in place on the A406 while emergency workers remove the car and make sure the building is safe.

Police have launched an appeal for information about the incident.