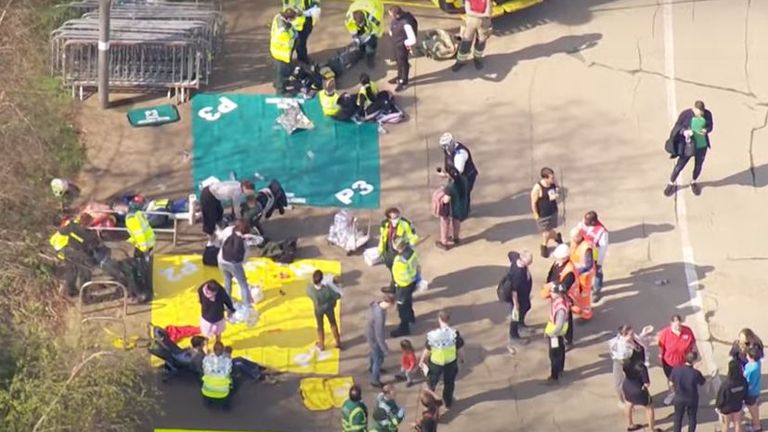 Emergency services responded to a “major incident” at the site in Stratford, east London, this morning and treated a number of people experiencing breathing difficulties at the scene.

Around 200 people were evacuated from the building, firefighters from London Fire and Rescue told reporters.

Twelve adults and seven children were taken to Homerton Hospital, while the remaining 10 were spread between the Royal London – a major trauma centre – and other nearby sites, the hospital trusts said.

Image:
People are being treated outside the venue in the Olympic Park

In an update Darren Farmer, London Ambulance Service gold commander, said: “This morning we responded to a major incident at the London Aquatic Centre in Stratford, alongside colleagues from the London Fire Brigade and Metropolitan Police.

“We also dispatched medics from London’s Air Ambulance. Our crews took 29 patients to hospital and assessed a further 48 patients at the scene. The majority of patients were reporting minor breathing difficulties.

“Thank you to all our teams who responded today, both at the scene and in our control room, and to our firefighter and police colleagues.” 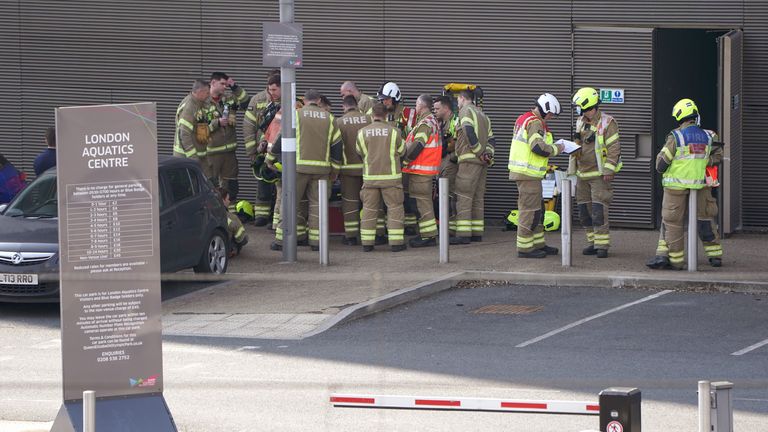 LAS said it stood down its response shortly after 3pm.

Earlier the London Fire brigade tweeted: “Update Aquatic Centre in #Stratford. Due to a chemical reaction a high quantity of chlorine gas was released inside the centre.

“While we ventilate the premises we would ask those residents in the immediate vicinity to close their doors and windows.”

People could be seen being placed into ambulances while others were wrapped in blankets.

Firefighters said the plan was to ventilate the centre to disperse the chlorine into the atmosphere.

In a tweet, Queen Elizabeth Olympic Park wrote: “There has been an incident at @AquaticsCentre this morning involving the release of a gas.

“The area has been cordoned off and evacuated. We’re working with emergency services on site. 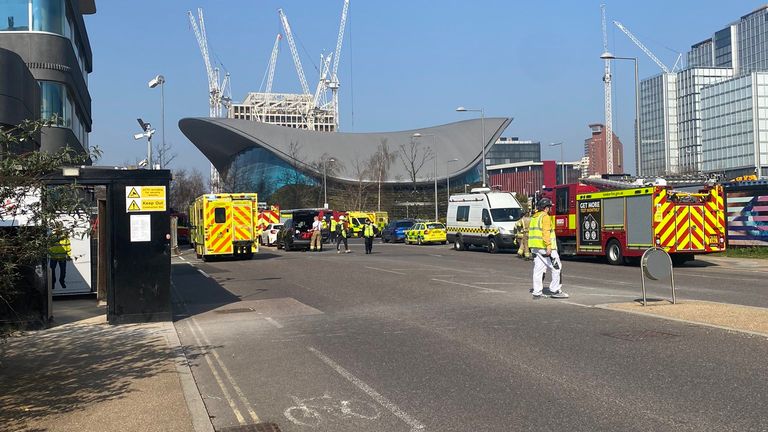 “There are a number of casualties with breathing difficulties being treated by @Ldn_Ambulance.”

The Sky helicopter filmed people being treated by paramedics outside the building and sitting on large blankets on the ground.

Fire engines, police cars and ambulances could also be seen lining the roads around the park.

A London Legacy Development Corporation spokesperson said it is working to ensure the park can reopen on Thursday.

Chlorine gas can cause eye irritation and breathing problems if it is released into the air. It is not flammable and can be easily detected because of its strong odour of bleach.