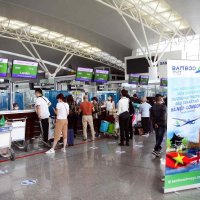 Bamboo Airways has opened a new nonstop route connecting Vietnam and the UK as the carrier continues to advance its long-haul expansion plans.

The launch follows Bamboo’s entry to the European market in February when it began serving Hanoi-Frankfurt (FRA). The carrier also hopes to add a nonstop route from Ho Chi Minh City’s Tan Son Nhat International Airport (SGN) to Frankfurt “as soon as conditions allow,” while it is also studying direct flights to Berlin (BER) and Munich (MUC).

According to statistics from Vietnam’s General Department of Customs, the bilateral turnover of Vietnam-UK trade in 2021 was around $6.6 billion. During the year, Vietnam’s exports to the UK increased by 16.4% and the UK’s exports to Vietnam increased by 24%.

Additionally, it is estimated that there are more than 100,000 overseas Vietnamese citizens studying and living in the UK, while Vietnam’s National Administration of Tourism found that the number of visitors from the UK to Vietnam totaled more than 315,000—up by 105% on the previous 12 months.

Bamboo’s entry to the London market comes days after Vietnam started to welcome back international tourists after two years of travel bans. From March 15, fully vaccinated travelers are permitted to enter so long as they comply with the country’s COVID-19 testing requirements.

Vietnam has also reintroduced visa waivers for the nationals of 13 countries, including the UK. The waivers allow for visits to Vietnam for up to 15 days without needing to apply for a visa.

As well as launching flights to London, Bamboo is growing in Australia with flights to Melbourne (MEL) and Sydney (SYD) from Ho Chi Minh City, alongside a Hanoi-Melbourne route.