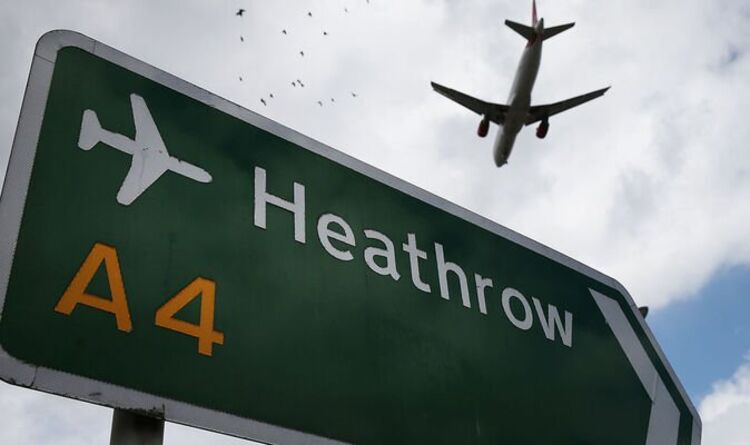 Several people arriving back into the country have to social media to vent their huge queues at Border Control. Videos and pictures have been posted to Twitter showing the chaos passengers are faced with. Reacting to a tweet from an angry passenger, Heathrow Airport wrote: “We are aware of longer immigration queues, due to the increase of passengers. Border Force are working hard to process passengers. Thank you for your patience.”

Former Conservative MP Lord Benyon took to Twitter to claim there is a queue “about a quarter-of-a-mile long” at Heathrow.

He raged: “In a queue about a quarter of a mile long at Heathrow.

“No one telling us about what the problem is. No staff on hand at all. Welcome to Britain.”

Lord Benyon then followed this up with another tweet just 10 minutes later, launching a furious attack against Heathrow and the lack of information being provided to passengers.

He wrote: Is anyone from @BA @HeathrowAirport or border force going to tell the thousands queuing at Terminal 5 anything?

“I am embarrassed that for so many this is the first experience of UK. Shambles.”

She wrote alongside this: “How are the queues at Immigration acceptable? @HeathrowAirport.

READ MORE: Pensions could be targeted by Rishi Sunak in Spring Statement

Fellow Twitter user “Kaikobad Forouhar” (@kaikof) fumed: “Worst queue I have ever seen at any airport at Terminal 5.

“Seems over 100m long just to get to the main immigration area where there will be more queuing. What is going on?”

Heathrow encountered more chaos last weekend when holidaymakers had to leave the airport without their luggage.

On Saturday, British Airways said “operational issues” at Heathrow were behind the cancellation of more than 25 flights as well as many delays.

Several customers were hit by cancellations.

BA said they were offering full refunds to some passengers, while Heathrow apologised that Border Force had experienced “delays processing passengers”.