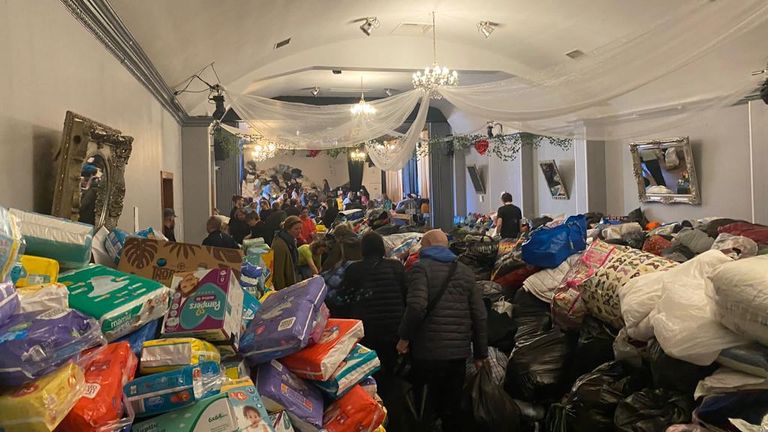 As Russia’s invasion enters its fifth day many people in the UK are asking how they can help to support those fleeing Ukraine.

At least 102 civilians have been killed in Ukraine with a further 304 injured since Russia launched its invasion, according to UN human rights chief Michelle Bachelet.

Prime Minister Boris Johnson has said immediate family members will be able to join Ukrainians settled in the UK as they flee the Russian invasion.

We’ve compiled a list of ways you can support people in Ukraine now:

Image:
A donation centre accepting items to be sent overseas as aid to Ukrainian refugees fleeing the country.

Charities in the UK and abroad are calling for donations to help provide emergency items and support.

The charity told Sky News: “We have been devastated by the images and reports coming out of Ukraine,” adding that it hopes to support to organisations working on the frontline of this crisis.

It has launched an emergency appeal to help teams respond to severe water shortages following damage to several water stations and pipelines during the invasion.

UNICEF has told Sky News the charity intends to stay in Ukraine and is focused on delivery of critical supplies to children and their families. ​These include blankets, warm clothes, hygiene and health kits – it has also launched an appeal.

International Committee of the Red Cross is fundraising for its teams to repair vital infrastructure, support health facilities with medicines and equipment, and support families with food and hygiene items.

Sunflower of Peace is providing backpacks to Ukrainian soldiers, citizens, and volunteers with first aid and medical supplies.

Ukrainian organisation Voices of Children provides psychological care to children dealing with the trauma of war and operates in villages and towns along the frontline in Donetsk and Luhansk regions. You can donate via their site on PayPal.

The Save the Children charity is helping to provide aid to children and their families – including hygiene kits, access to safe education, grants for families to pay for food and medicine.

Non-profit organisation Nova Ukraine has a donations page and provides humanitarian aid to vulnerable groups and individuals in Ukraine.

Save the Children also has a Ukraine Crisis Relief Fund to help Ukrainian families with donations used to help families meet their basic needs such as food, medicine and shelter.

Local donation centres for items including warm clothing and bedding have also been put up across the UK.

One such is the White Eagle Club in Balham, south London. Donations there will be sent overseas as aid to Ukrainian refugees fleeing the country. The venue is open Monday 28 February 10am-1pm, Wednesday 2 March 3pm-8pm and Friday 4 March 10am-5pm.

Volunteers say their most needed items include batteries and flashlights, clothes, shoes, sanitary products and bedding.

Hepatitis: Mystery spike in liver illness among children in UK now emerging in EU and US | UK News