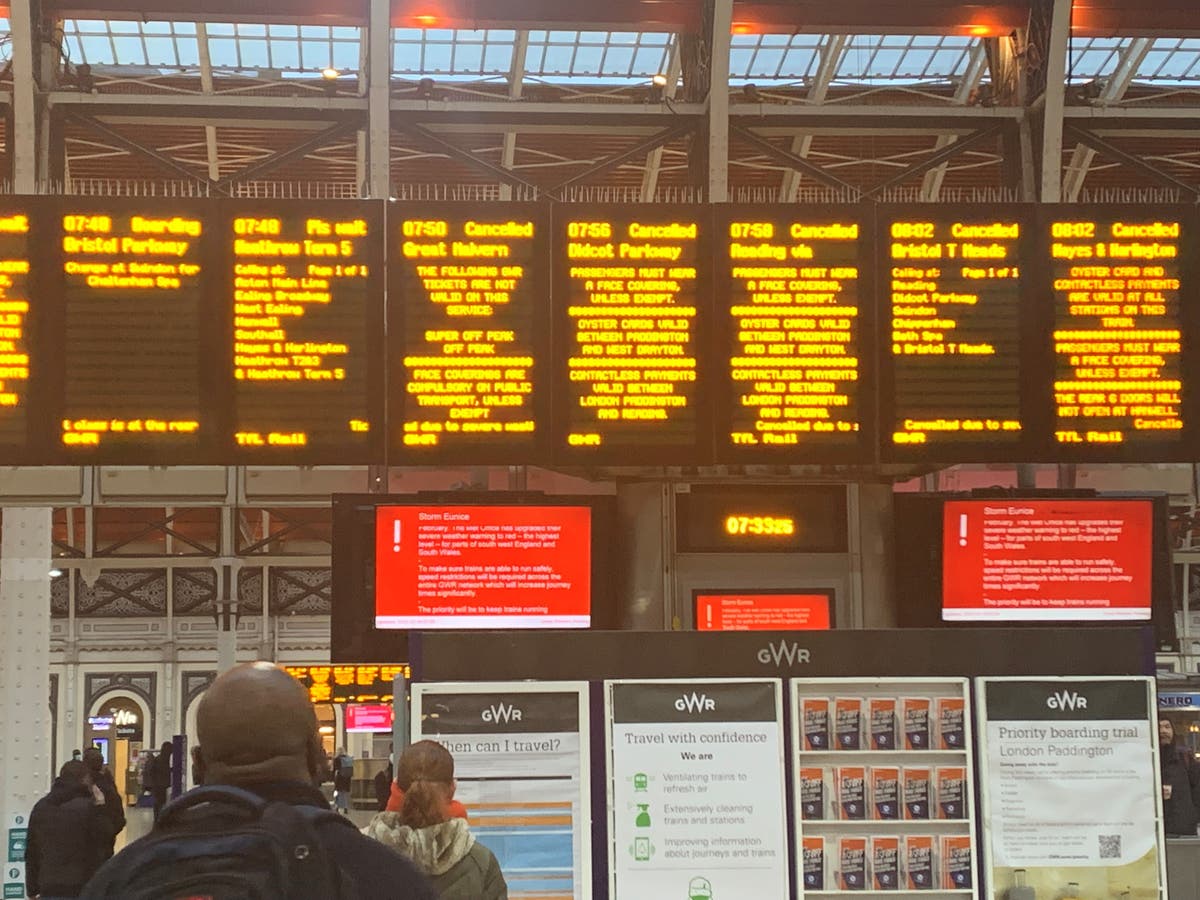 Met Office meteorologist Alex Deakin has said it is the first time a red weather warning has been issued for London and the south-east of London.

Mr Deakin said this meant there is “risk to life” and urged people in densely populated areas to be aware of “flying debris” from scaffolding and high-risk buildings.

“Hopefully people are taking heed of the warnings that have been issued,” he told Sky News.

Mr Deakin said the decision to issue the rare red weather warning overnight meant “we are more confident we are going to see significant impact across London and the south-east.”

British Airways has cancelled “a number of flights” due to severe weather.

The airline said in a statement: “Like other airlines, we’re expecting extreme weather conditions at airports across the UK as a result of Storm Eunice, which will cause significant disruption.

“Safety is our number one priority, and we’re cancelling a number of flights.

“We’re doing everything we can to minimise disruption for our customers, including putting on larger aircraft where possible and providing a range of flexible rebooking options.

“We’d like to thank customers for their patience and advise them to check the latest flight information on our website before heading to the airport.”

Shadow Justice Secretary Steve Reed has told people to “follow the advice” issued by the government in a bid to stay safe as Storm Eunice makes landfall on Friday Morning.

The Croydon North MP told Sky News it was “quite an unprecedented situation we’re all facing”.

The capital has been issued with a rare red weather warning with Storm Eunice braced to hit the capital from 10am.

Mayor of London Sadiq Khan has told Londoners to “stay at home” and “do not take risks” as the storm approaches the capital.

Travelling to coast to take pictures of Storm Eunice ‘probably the most stupid thing you can do’, says Environment Agency spokesman

A spokesman from the Environment Agency has told people to resist the temptation to travel to the coast for photographs of Storm Eunice, describing it as “probably the most stupid thing you can do”.

Roy Stokes told BBC Breakfast: “The worst possible thing you could do is go anywhere near these (coastal areas).

“I know people like to go and get photos and pictures, it’s quite a dramatic scene but they’re far safer to watch it on the screen.”

Sadiq Khan has told Londoners to “stay at home” and “do not take risks” as the capital prepares for Storm Eunice.

He tweeted on Friday morning: “A red warning has now been issued for London. #StormEunice will bring damaging winds which pose a risk to life today.

“Please stay at home, do not take risks, and do not travel unless absolutely essential.”

Several of London’s biggest tourist attractions have shut on Friday as the capital is battered by heavy wind and rain brought by Storm Eunice.

The London Eye and the Royal Botanic Gardens are among the tourist hotspots closing their doors.

People should “take precautions” during Storm Eunice, with the army “on high readiness standby” to help, a minister has said.

“But in the immediate term there are troops on high readiness standby, the Environment Agency on the ground, the networks themselves have to be very much active, and they are.

“Weather is unpredictable and it is really important that we all continue… to take those precautions and try to keep everyone safe.”

Asked if people could get “cut off” by the storm, Mr Hinds said that was “absolutely a risk”, and the red weather warning indicated a “risk to life and limb”.

With two red weather warnings and wider amber warnings being issued for parts of the UK, the following train operators are advising passengers not to travel on Friday, February 18.

Good Morning Britain weather presenter Lucy Verasamy has stressed the incredibly high risk to safety in London, noting that “it is a danger to life”.

She said: “London is one of the most populated cities in the entire world – an 80mph gust of wind can bring down scaffolding, it can bring down cranes.

“And it’s that that can cause fatalities.”

The Met Office has issued a rare red weather warning for London, the south-east and parts of the east of England from 10am to 3pm on Friday.

South Eastern railway advises customers against travelling on its services

Railway operator South Eastern is advising its customers “against travelling” as London and the south-east brace for Storm Eunice.

They said in a tweet: “There’s a large number of cancellations on our Metro routes from Dartford this morning.

“Whilst we are advising against travelling, if you do have to make an essential journey you can use London Buses on all routes between Dartford & Lewisham at no extra cost”