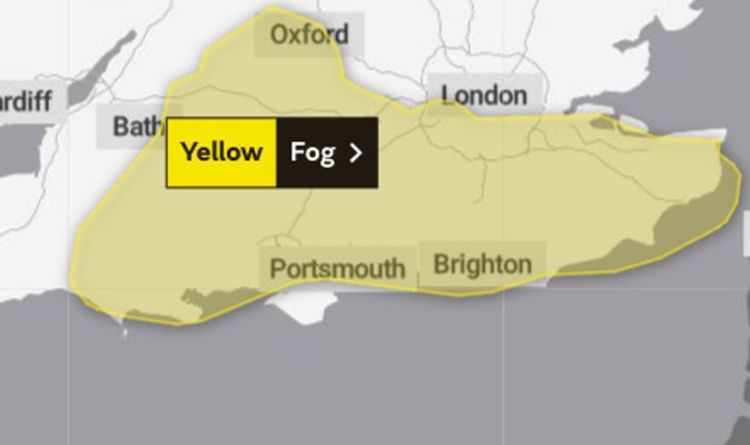 Buses, trains and road networks will see delays, as well as the possibility of flights being delayed or cancelled. Difficult driving conditions are also expected in certain areas. The yellow warning firecast a thick layer of fog is expected from 5pm hours onwards.

The blanket of fog is expected to lay in place until 6am hours the next morning.

Fog has been persistent in places throughout Tuesday and is expected to thicken up during Tuesday evening.

The fog will persist for many overnight before clearing from the northwest early Wednesday morning.

Meanwhile, temperatures dropped to an icy -4C in the early hours of this morning and are not expected to rise to much more than 6C throughout the day.

Met Office forecaster Craig Snell said motorists in parts of England and Wales affected by the yellow weather warning should allow extra time for their journeys.

He said: “The fog is going to be most widespread in southern, eastern England, into the Midlands and the east side of Wales too.

“Not everywhere within that warning will be foggy, but the main message to drivers is to allow some extra time for your journey because there could be fog around.

“It could have a knock-on effect on public transport, so there could be delays to bus journeys and train journeys.

“The fog will tend to clear as the morning goes on.

“It may linger on in a few spots, but towards lunchtime, conditions should be much better.”

Mr Snell added that a combination of long winter nights, clear skies and still air can cause fog to settle.

“When the air is quite still, there’s nothing to move the fog around so that’s why it becomes dense,” he said.

The Met Office explains the frosty winter condition occurs when fog forms in temperatures that are below freezing.

The conditions are more often experienced at high ground, such as on mountain-tops and it is rare for it to take place at sea level.

In a freezing fog event, water droplets in the air remain as liquid and become “supercooled”, remaining wet even though they are below freezing temperature.

The national forecaster explains the droplets remain wet as the liquid needs a surface to freeze upon.

“When droplets from freezing fog freeze onto surfaces, a white deposit of feathery ice crystals are formed,” the Met Office’s website explains.

“This is referred to as rime; rime is a characteristic of freezing fog and is often seen on vertical surfaces exposed to the wind.”