A woman died in an early hours blaze in South London on Monday, despite a desperate attempt by firefighters to save her.

Grieving relatives at the scene told Metro.co.uk that the two men who managed to escape as the fire tore through their home in Lambeth were her son and husband.

The London Fire Brigade added that the pair got out before its crews arrived and did not sustain any injuries.

Firefighters reached the woman on the first floor – half of which was completely destroyed in the flames – but she died of her injuries at the scene.

Family members say she was in her 40s and had lived in the house ‘for a long time’.

They paid tribute to the victim as a ‘lovely person’.

‘She was a very, very nice, helpful person’, her sister told Metro.co.uk. 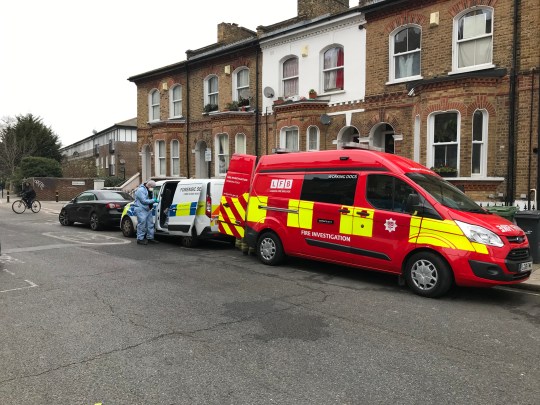 Forensics teams are on the scene (Picture: Harrison Jones)

‘She did not have a problem with anyone.’

The LFB was called to the incident between Herne Hill and Brixton stations at 4.08am in the morning.

The fire service is not yet sure of the cause of the blaze but are investigating and say the situation was under control by 5.03am.

Many residents of Railton Road were unaware of the fire until they woke up this morning, with a number of neighbours telling Metro.co.uk that they did not hear or see anything at the time of the blaze.

A spokeswoman for the LFB told Metro.co.uk: ‘As it was a fatal fire, our investigation into the cause and all aspects of the fire will form part of the Coroner’s inquest.’ 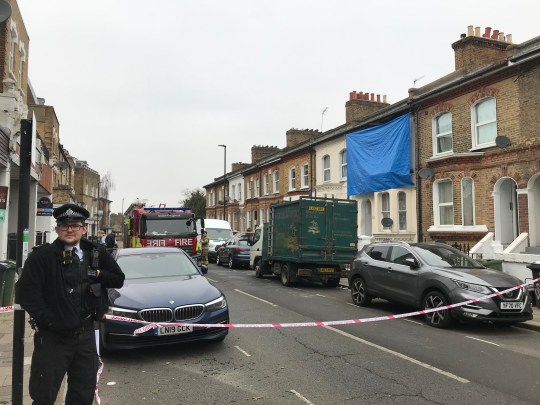 The road is currently cordoned off by police, with a blue sheet hanging over the property (Picture: Harrison Jones)

Forensics teams and various emergency vehicles were on the scene this morning, with a blue sheet covering the first floor of a mid-terraced, two-storey property.

A Metropolitan Police spokesman told Metro.co.uk: ‘Emergency services were called at around 4.08am on Monday, 24 January, to a fire at residential premises in Railton Road, Lambeth.

‘Officers attended along with LFB and London Ambulance Service (LAS).’

He added that no arrests had been made, and continued: ‘A woman was pronounced dead at the scene. Her next of kin has been informed.

‘A post-mortem examination will be arranged in due course.

‘The cause of the fire is unknown and subject to investigation by officers alongside LFB colleagues.’

Four fire engines and around 25 firefighters attended, with some having to wear breathing apparatus to tackle the blaze.

Crews from Acton, Clapham, Peckham and West Norwood were on the scene.

A LAS spokeswoman added: ‘We sent an ambulance crew, an incident response officer, and a clinical team leader.

‘Sadly a person had died at the scene.’