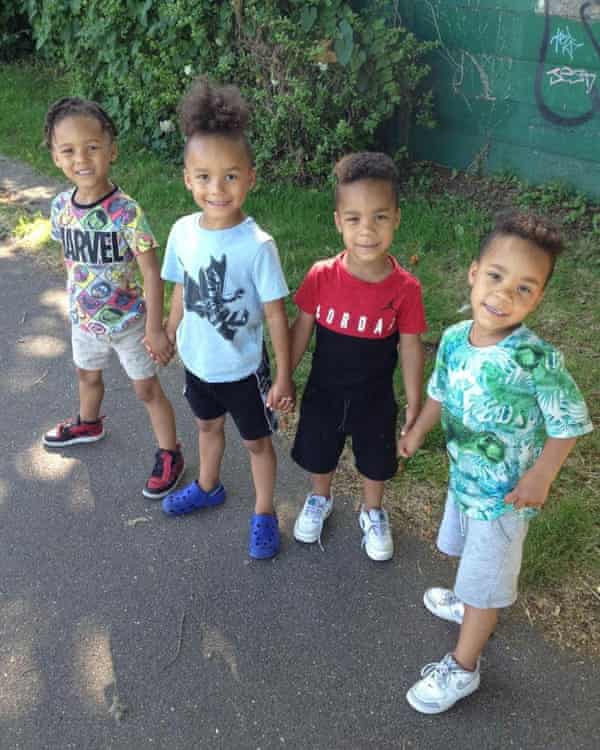 A woman who was arrested after a fire that killed four young children has been bailed.

The 27-year-old, who was arrested on suspicion of child neglect following the blaze in Sutton, south London, on Thursday, will return to a police station in mid-January, the Metropolitan police said.

On Friday the father of the four boys said the family was “utterly devastated”.

About 60 firefighters reached the scene in under three minutes and tried to rescue the children, who were given CPR and taken to hospital, where they died.

The cause of the blaze on Thursday evening is being investigated by fire teams and the Metropolitan police.

Hoath said in a statement given to MailOnline: “Myself and my family are utterly devastated by this tragic loss.

The two pairs of twins who died in the fire. Photograph: Jason Hoath/Facebook

“They were bright, caring, lovable boys, but most of all sons, brothers, grandsons, great-grandsons, nephews and cousins.

“We would like to thank all the emergency services who did so much to try and save our boys, and also the local community who have come together at this difficult time.

“I would ask that my family are given time to grieve in private. They will be forever in my heart and thoughts, love Dad.”

He told reporters at the scene on Friday afternoon: “There was nobody else inside the property at the time of the fire.”

The boys’ grandfather, Jason Hoath, a security officer at AFC Wimbledon, a League One football club, said on Friday: “I’ve just left my son. He’s devastated. We all are. I’ve lost four grandchildren and he’s lost his kids as well.

“It’s all the more heartbreaking because their presents were piled under the tree, ready. We don’t know what happened and are just waiting for the police to get back to us.”

In a post on Facebook, the grandfather wrote: “I am devastated to say that the horrendous house fire that took place in Sutton last night leading to four children loosing their life’s [sic] were my amazing smart and beautiful grandsons.

A statement released by the football club said: “Everyone at AFC Wimbledon would like to extend our deepest sympathies to Jason Hoath following the tragic deaths of his four young grandsons in a Sutton house fire.

“Jason has been our deputy safety officer for over 12 years and all our thoughts are with him at such a distressing time.”

A minute’s silence to remember the boys was observed before Sutton United’s League Two match with Harrogate Town on Saturday.