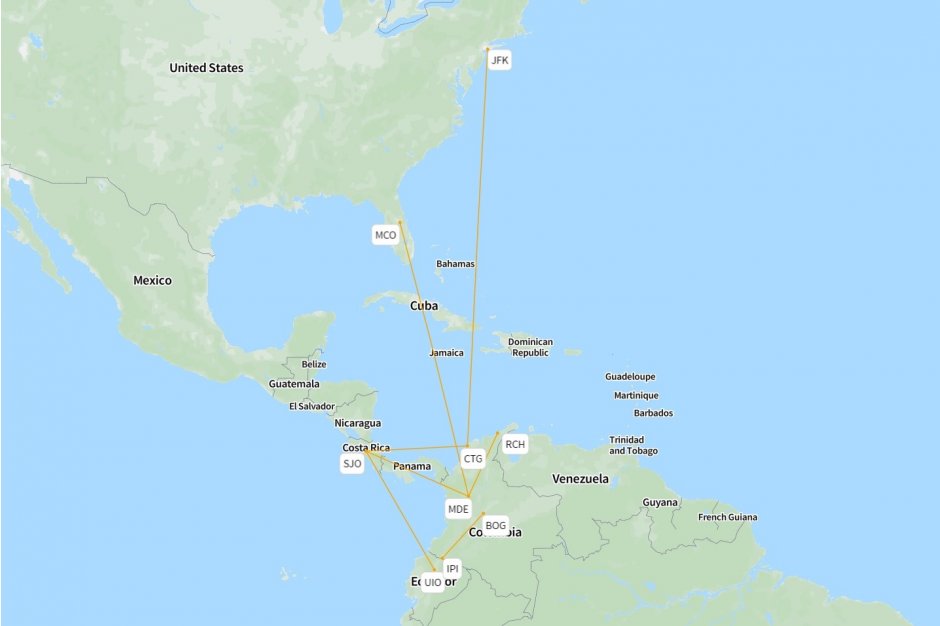 Seven new routes are to be opened by Avianca over the coming months, including two services between Colombia and the US.

The planned network additions follow the inauguration of 17 routes during 2021 as part of an ambition to launch 50 new routes in three years. The latest services to be announced mean the Star Alliance member, which exited Chapter 11 proceedings in December, is almost halfway to hitting that target.

“We continue to provide more and better opportunities for point-to-point and nonstop connectivity to our clients to travel to their preferred destinations in America and Europe,” Colombia sales director Ana María Copete said. “In 2021, we set out to inaugurate 50 new routes in the next three years and we are getting closer to achieving it.”

In Colombia, Medellin’s José María Córdova (MDE) will receive three nonstop connections, two of which are to international destinations.

From March 27, Avianca will begin flights to San José’s Juan Santamaría International (SJO) in Costa Rica, followed by service to Orlando (MCO) in the US two days later. A domestic route to Riohacha (RCH) in northern Colombia will also launch on March 29.

Data provided by OAG Schedules Analyser shows the carrier will compete with Spirit Airlines and Viva Air on the MDE-MCO sector, as well as with Viva between MDE and RCH. Viva plans to launch the Riohacha route on March 19.

Two routes are being opened from Cartagena (CTG), a port city on Colombia’s Caribbean coast, including the resumption of flights to New York John F Kennedy (JFK). Operations between CGT and JFK start on March 27—almost three years after Avianca suspended nonstop flights between the cities. JetBlue also serves the route.

In addition, the airline will also begin Cartagena-San José flights on March 27.

From Colombia’s capital Bogota, a domestic connection between El Dorado International (BOG) and Ipiales (IPI) will start on May 16. Ipiales is a small Andean city in western Colombia, near the border with Ecuador, and Avianca will become the sole operator of BOG-IPI flights.

Finally, Avianca intends to restart flights between Bogota and London Heathrow (LHR) on March 28 after pausing regular service in March 2020 because of the pandemic. Flights will also resume between Cartagena and Miami on March 27 after a two-year hiatus, while Cali (CLO)-Orlando will switch from seasonal service to a year-round route on the same day.