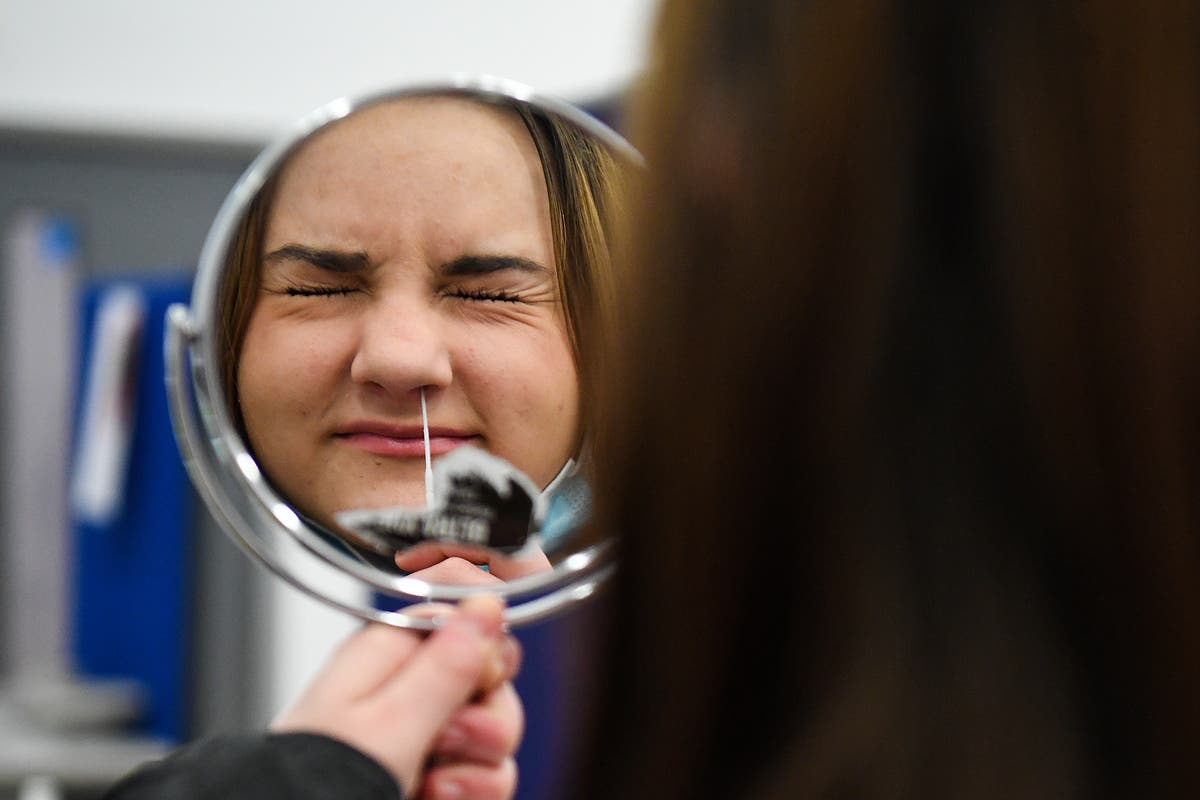 The move would help holidaymakers seeking winter sun, and had been called for by sections of the travel industry.

Ministers are discussing the move on Wednesday, with Health Secretary Sajid Javid previously telling Parliament that the justification for such rules would lessen over time as Omicron became the dominant variant in the UK.

Research commissioned by the owner of Manchester, Stansted and East Midlands airports indicated that removing all international travel testing would not affect the spread of the Omicron variant in the UK.

PCR tests for symptomless to be scrapped from Jan 11

Follow-up PCR tests will be scrapped from January 11 for people with no Covid019 symptoms in England.

Currently, anyone who tests positive using a lateral flow test (LFT) has to get a follow-up PCR test to confirm their result.

They will still have to isolate for at least seven days, but only from the date of their positive lateral flow test.

The change could be announced on Wednesday as the Prime Minister argues to his Cabinet they should stick by the Plan B measures in England despite admitting parts of the health service will feel “temporarily overwhelmed”.

The French president Emmanuel Macron has caused controversy after telling a newspaper his Covid strategy was to “p*** off” the unvaccinated.

Mr Macron made the remark in an interview with the Le Parisien newspaper late Tuesday, in which he also said unvaccinated people were “irresponsible” and that he planned to make their lives so complicated that they would end up getting jabbed.

The interview was published shortly before parliament was due to resume a debate over new legislation which would make vaccine proof mandatory for access to restaurants, cinemas or even to take the train,

The debate was suspended amid the controversy surrounding Mr Macron’s comments, but is expected to resume later today.

Several firms have now cut the number of trains after working with the Government to create amended timetables because around 10% of rail staff are absent from the workforce.

The new schedules focus on peak travel times to provide trains for key workers, school pupils and people who cannot work from home.

Weekly registered deaths involving coronavirus in England and Wales fell in the week leading up to Christmas, new figures reveal.

However, it is still too soon to see any impact in the figures of the surge in Omicron cases.

In the week ending December 24, 591 deaths registered mentioned Covid-19 on the death certificate, the Office for National Statistics (ONS) said.

This is the sixth consecutive weekly fall – down 22% from the previous week – and the lowest number of deaths since the week to August 20, when the total was 570.

Coronavirus accounted for around one in 22 (4.5%) of all deaths registered in England and Wales in the latest week.

Ambulance service admits asking patients to get lift to hospital

An ambulance service had admitted asking patients to get a lift instead of calling an ambulance over the bank holiday weekend after staff absences.

Medical director Dr Mathew Beattie said: “This was an incredibly difficult decision to take, but when patients are waiting an average of an hour for an ambulance that should be responding within 18 minutes, there is a risk for them coming to harm if they cannot get to hospital quickly.”

He added that “where safe”, the service will continue to ask patients to make their own way to hospital, but “we would never ask anyone to drive themselves to hospital with a life-threatening illness”.

Labour leader, Sir Keir Starmer, has tested positive for coronavirus a day after a major speech setting out his vision for Britain’s future.

He had previously tested positive for coronavirus on the day of the Budget in October.

On Tuesday, Sir Keir addressed an audience in Birmingham where he promised “straight leadership” based on the values of “security, prosperity and respect” if his party is returned to power.

It may be too late for Covid restrictions to have impact, says expert

It may be too late to introduce any new Covid restrictions that would have a meaningful impact, an expert has suggested.

Dr Mike Tildesley, a member of the Scientific Pandemic Influenza Modelling group (Spi-M), told BBC Breakfast that imposing restrictions was always better when done earlier but had to be weighed up against the effect they have on society.

“It does look like we may be in a situation where – we’re getting cases very, very high – but there’s early evidence that things might be turning around in London,” he said.

“The problem, of course, is that if you’re thinking about introducing controls, once you’re beyond the peak of the infection, then that has much less effect.

However, Dr Tildesley would not agree to saying it was definitely too late for restrictions, adding it was unclear the epidemic had peaked.

Hong Kong has banned flights from eight countries, including the UK, for two weeks amid the Omicron outbreak.

Lam was speaking as the authorities launched a city-wide search for the contacts of a Covid patient and ordered a Royal Caribbean “cruise to nowhere” ship to return to port early, where nine passengers on the vessel were identified as Covid contacts.

NHS boss: I could support changes to PCR testing rules

Matthew Taylor, chief executive of the NHS Confederation, said he would support relaxing rules around PCR follow-up tests if it is backed up by scientific evidence.

Asked if he would support the change for the asymptomatic, Mr Taylor told BBC Radio 4’s Today programme: “As long as it is based on the science, because on the one hand we do need to try to get staff back to work as soon as possible.

“Hospitals who have declared critical incidents, for example, are essentially reaching out to staff who are on leave, on rest days or even recently retired and asking them to come back to wards, so the situation is desperate – any way of getting staff back into hospital is a good thing.

“But on the other hand, if staff come back into hospital and are infectious, that’s completely counterproductive because that is going to mean more sickness in the hospital and for staff, so this can’t be led by politics or blind hope – it has to be led by the science.”

Information about the virus itself could potentially be lost if the requirement for a confirmatory PCR test is relaxed, an expert has said.

However, Dr Mike Tildesley added that lateral flow tests were very accurate at recording a positive test, saying it was “very, very important” people continue to record their test results.

Dr Tildesley, a member of the Scientific Pandemic Influenza Modelling group (Spi-M), told BBC Breakfast: “Of course, with a PCR test what happens is a number of those can get sent away for sequencing and then you get more information regarding the virus itself.

“So, that sort of information may potentially be lost, but only a subset of those PCR tests are sent away for sequencing anyway, so, hopefully, we won’t be losing the levels of information that we already have in this country that enables us to identify variants and so forth.”