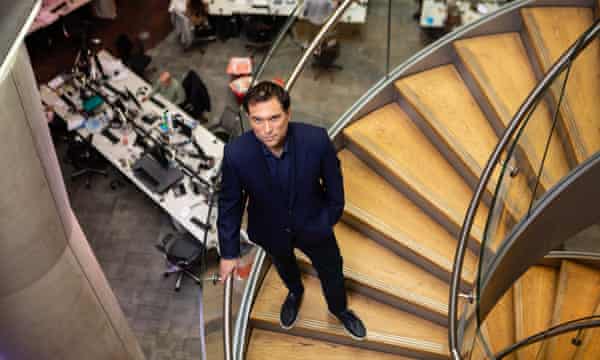 Ros Atkins, 47, grew up in Cornwall and the Caribbean before reading history at Cambridge. His BBC career began on Radio 5 Live shortly after 9/11. He now presents Outside Source on the BBC News Channel and recently went viral for his “explainer” videos, broadcast on BBC Breakfast and posted online. He lives in south London with his wife and two daughters.

How are you finding newfound fame?
Well, I’ve neither been mobbed nor chased down the street, but it’s always pleasant if people pay attention to what you do.

You’ve been called “the Facts Man” and “2021’s explainer-in-chief”. Happy with those descriptions?
I’ve been called a lot worse, so I’ll take either of those more flattering monikers.

How did you hit upon the explainer format?
I’ve long been passionate about explanation as a form of news journalism. I launched Outside Source in 2014, so it’s a culmination of seven years of honing how we use language and images to explain stories as clearly as possible. I’ve definitely ended up using a different tone to a classic news bulletin. Three years ago, I noticed that the format was very successful on TV but not getting traction digitally. It wasn’t working for audiences who consume news online. I started to study different types of storytelling – how friends do it in the pub, how comedians, podcasters and documentary-makers do it. That took me to a different place in terms of how I offer up information.

There may be elements within a story that people find humorous, but for me, the facts take centre-stage

It’s been called “assertive impartiality”. Is that what you were aiming for?
In some ways, what we’re doing is new. In others, it’s as old as the BBC itself. The BBC’s journalism has always been rooted in facts, fairness, objectivity and providing context. These videos reimagine how we do that. Partly because of how politics has evolved, our approach to impartiality was struggling to cope. There was an appetite from audiences to be more robust in our assessments of what’s true. Let’s properly dissect what people are saying. If it’s not true, let’s say so – in no uncertain terms. You don’t bring opinion or emotion into it. It’s simply about using language that’s sparse and direct to help viewers understand. “Assertive impartiality” isn’t my phrase, but it’s not a bad description.

The videos get shared by people from both ends of the political spectrum. Is that a sign that they strike the right balance?
The number of views has been a lovely surprise, but I’d put that on a par with the fact that they’ve been well received across the spectrum. It’s thrilling that influential people, from a whole range of political backgrounds, think the videos are helpful.

Your video about Downing Street Christmas parties was watched 6m times on Twitter. What’s it like going viral?
I’m normally sitting on the train home when the videos go live. For a news clip to get a million views on Twitter is very unusual. Six times that is extraordinary. Your messages suddenly light up. It also goes through stages. You might get an initial flurry of activity, then it’ll pause. You assume it’s run its course, but then someone like Prof Brian Cox or Gary Lineker might share it and it’ll gather momentum again. I do a bit of body-boarding and posting videos is a bit like catching a wave.

Do you have trouble keeping a straight face during belief-beggaring reports?
No, it’s the news and what we’re covering is serious. There may be elements within a story that people find humorous, but for me, the facts take centre-stage.

I could’ve sworn I saw the hint of a smile when you said: “Drinks, nibbles, games”…
Never!

You have a very consistent look. How many blue shirts and jackets do you own?
An awful lot. A stylist called Jane Field said navy blue suited me, so we went shopping in Oxford Street and bought loads. It means the videos all look the same – same shot, similar clothes – so people recognise them when they pop up in their feed.

Ros Atkins: ‘There’s so much information coming at all of us and people want a hand with that.’ Photograph: Antonio Olmos/The Observer

You’ve broadcast from home a lot over the past two years. How’s that been?
Quite convenient, actually. I set up my study as a home studio. I used three spare mattresses for soundproofing. I got a pallet from a skip down the street and put my chair on it, so it was at camera level. My younger daughter, who’s 10, operated my autocue and became very proficient. We made signs saying “No entry, live on-air”. The doorbell rang occasionally, but there’s not much you can do about that.

Do your daughters find it strange that you’re on social media more than them?
There’s certainly a pretty direct correlation between the popularity of these videos and my family’s frustration about how much time I’m on Twitter. They often say: “Dad, put your phone down.” I always say: “But it’s a big story” and they say: “It’s always a big story.”

You were once a drum’n’bass DJ. Do you still hit the decks on occasion?
No, but I might come back to it when the kids are older. My last gig was in the mid 00s at a festival in Regent’s Park. Our first daughter was born a few days later.

You’re the founder of The 50:50 Project, to increase representation of women in media content. What inspired that?
I started it in 2016, primarily aimed at my own programme. We all felt that gender balance in our journalism was important, but weren’t managing to achieve it. On a trip to California, I visited lots of academics, corporate people and newsroom leaders, which rearranged my brain. We started systematically generating data on everything we produce. This self-monitoring system worked, other BBC teams joined in and it snowballed. Now it’s in more than 100 organisations in 25 countries. We’re all incredibly proud of it. Most importantly, it’s delivered significant shifts in the diversity of what we make.

What makes you happy when you’re not working?
I love squash but got a nasty knee injury, so I’m waiting to have surgery before I can play again. I’ve got quite into running instead. I started cooking in lockdown. I used to be terrible but my wife, Sara, got me a book called Persiana by Sabrina Ghayour, which changed my entire view of the kitchen. Otherwise, I just love pottering about with football on the radio. I follow Dulwich Hamlet and Plymouth Argyle.

How do you see politics panning out in 2022 and how will your explainers fit in?
I’ve given up all predictions since 2016. The pandemic is obviously ongoing. So is the Brexit process. It’s hard to imagine these huge stories won’t continue to dominate the news. There’s so much information coming at all of us and people want a hand with that. Someone said that watching my videos is like having 10 podcasts and five long reads crammed into your head within a few minutes. They’re a shortcut.

There was a groundswell of opinion last year that you should do an explainer for Line of Duty too…
I saw that. There are limits to what the team can do. Perhaps the Line of Duty finale is beyond us.