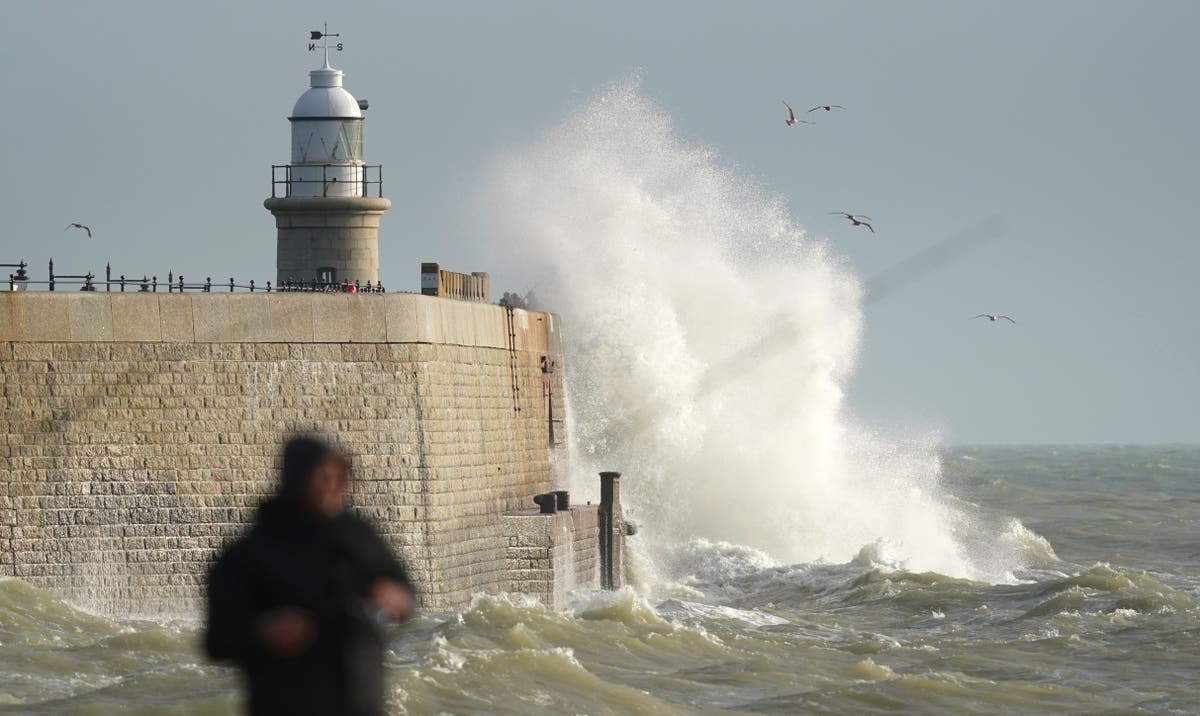 The Met Office which had issued a weather warning for thunderstorms for Sunday afternoon, said that heavy showers and gusty winds had moved along the south coast.

Met Office forecaster Simon Partridge said: “The warning went out because we had a band of very heavy thundery showers that started off from the Isles of Scilly and made its way across the southern third of the UK.

“There was heavy rain in amongst it and some very strong winds with gusts of 40-50 mph along the south coast.

“There was also some lightning, not a huge amount, along the south coast area.”

The heavy rain and strong gusty winds would have led to some “very difficult driving conditions”.

Mr Partridge said it had been a thin band of rain but “if you were driving down the road you certainly would have had probably 30 minutes or so of really dangerous driving conditions, it was certainly pretty intense”.

Forecasters had said the fast-moving thunderstorms could result in sudden flooding, lightning strikes and possible “localised disruption” to areas including the east of England, London and the south-east, south-west England and parts of Wales.

It followed a bout of unusually mild weather over the New Year, due to warm subtropical air flowing from the Azores, which pushed temperatures to around 16C, rather than about 7C, for this time of year.

The Met Office said that 16.3C had been reached in St James’s Park, central London, meaning it is “likely to be confirmed” as a record maximum temperature for any New Year’s Day.

It came after overnight temperatures reached 16.5C in Bala, Gwynedd, north Wales, which provisionally makes it the warmest New Year’s Eve on record.

The forecasters also said the warm weather would not last beyond the early part of next week.

A temperature of 12.7C, which is well above average for the time of year, was reached in Writtal, Essex, on Sunday but it will be “all change” for the first week of the new year, according to Mr Partridge.

Daytime temperatures are expected to plunge to 4-6C in Scotland by Tuesday when it will be 8-9C in the southern half of the UK.

The strength of the wind will make it feel cooler than these figures and northern Scotland will have to brace itself for “strong northerly winds which will be gale or even severe gale force” along with the chance of see severe snow showers.

Warnings for wind and snow are in also in place for northern Scotland on Tuesday and Wednesday.

Mr Partridge said: “The combination of gales and snow showers is why there is a warning out for that part of the world.

“Driving conditions will be really dangerous because you are not going to see a great deal if you have got gales and snow.”

Forecaster say that showers and strong winds may cause difficult driving conditions on higher routes.

Bus ferry and train services could be affected, with trips taking longer or even being cancelled.

Angus, Grampian, Highlands and Eilean Siar, plus Orkney and Shetland are among the areas that could be affected.

Areas above 200 metres could be among the worst affected, with the snowfall possibly reaching 10-15cm in places.

The weather warning adds: “In combination with winds gusting 50 to 60mph, perhaps 70mph on exposed summits, temporary blizzard conditions and some drifting of snow on higher-level routes is likely.

“Gusts of around 70mph on exposed coasts will generate some large waves and dangerous coastal conditions in a few places.”