Covid-19 cases in the UK soared past 93,000 to reach a record high for the third consecutive day on Friday, as researchers warned there was “no evidence” that Omicron was milder than the Delta variant.

The Imperial College London research, which analysed UK infection data, casts doubt on the hopes of some experts, based on reports from medics in South Africa, that a change in the virulence of the new variant would limit pressure on health systems.

An emergency meeting of ministers will be held on Saturday to examine the latest Omicron data, which one government insider described as “pretty bleak”. Another described the threat of the variant as “potentially pretty terrifying”.

But Prof Azra Ghani, an epidemiologist at Imperial and one of the study’s authors, said the record-breaking infection levels from Omicron could still lead to “a large number of people requiring hospitalisation”.

Another senior government official said there was growing concern over hospital pressures in London, the epicentre of Omicron in the UK. “It’s been another record day of cases . . . and we’re monitoring London hospitalisation data closely,” the person said.

In a worst-case scenario, daily deaths from the Omicron wave could number in the thousands, exceeding last winter’s peak, the study said. But Ghani emphasised the figures were “an illustration of the need to act rather than a prediction”.

Several options for further restrictions, the so-called “Plan C”, have been drawn up by officials and were put to Boris Johnson on Friday. Those with knowledge of the plans said they ranged from “mild guidance to nudge people, right through to lockdown”.

Some 93,045 people tested positive within the latest 24-hour period, up nearly 60 per cent from the 58,194 cases reported a week earlier. Meanwhile, 861,306 booster shots were administered across the UK, marking a record day for the rollout.

“It’s 50:50 at the moment on whether the approach we take will be the Scottish guidance one,” one government insider said, reflecting Nicola Sturgeon’s plea to limit socialising to three households, “vs stronger new measures that require the recall of parliament.”

Allies of Johnson said he wanted to continue with the “guidance” approach rather than imposing tougher restrictions. “Boris is petrified of disrupting two Christmases in a row, but he also has to be realistic about the threat we face,” one said.

Chancellor Rishi Sunak will spend the weekend considering calls from business for a new support package for pubs and restaurants suffering a collapse in business as more people cancel Christmas get-togethers. 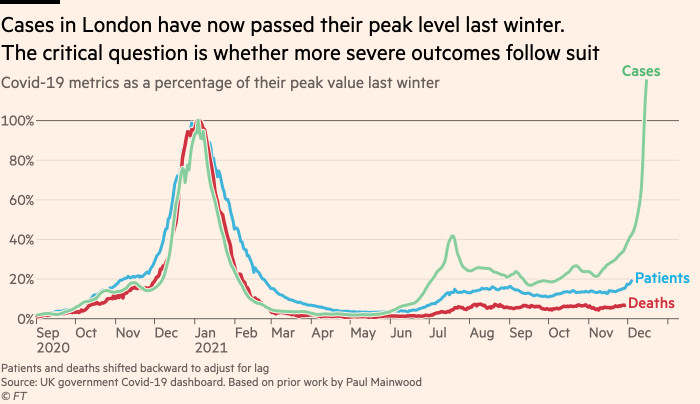 Prof Neil Ferguson, a UK government science adviser who led the Imperial study, said “time is of the essence” if the government wishes to make “additional decisions” about further restrictions, adding that they “will need to be made in the next week or two to have a substantial impact”.

“If you have enough cases per day, the resulting number of hospitalisations we think could still pose potentially major challenges for any health system,” he added.

Ferguson said that the data provided “no strong signal of an intrinsically reduced severity of Omicron versus Delta”. But he added that a “much more definitive judgment” could be made “within a week” as more data emerge on Omicron-related admissions, which are increasing “quite sharply” in London and Manchester.

The findings on severity were based on analysis of 120,000 Delta cases and 15,000 suspected Omicron cases, alongside 24 Omicron hospitalisations and more than 1,000 Delta hospitalisations. The preliminary research suggested people infected with Omicron were as likely to show symptoms and require hospital treatment as Delta patients.

Ghani said the results demonstrated “the importance of delivering booster doses”. Without a booster dose, protection against severe disease with Omicron could wane to about 20 per cent for those who received the Oxford/AstraZeneca vaccine, and 40 per cent for BioNTech/Pfizer by six months after the second dose.

However, the authors noted that this was a worst-case scenario and the decline could be reduced by the greater longevity of protection provided by T-cells and B-cells, the immune system’s second line of defence.

By six months after the second dose, two doses of AstraZeneca most likely offer between zero and 5 per cent protection against symptomatic infection, and two doses of BioNTech/Pfizer about 20 per cent, the research showed, down from about 30 and 60 per cent respectively against Delta.

The research also found that Omicron posed a five times greater risk of reinfection compared with the Delta strain, meaning the protection against reinfection could be as low as 19 per cent, down from 85 per cent protection before Omicron hit.