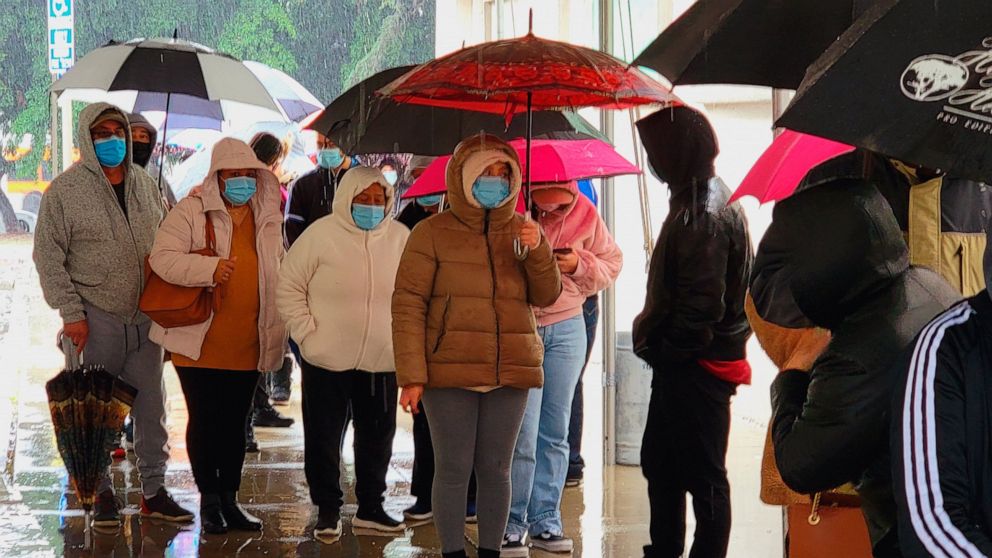 Gov. Kathy Hochul also said students at state universities and the City University of New York will have to get coronavirus vaccine booster shots to be on campus in the spring semester and must test negative before returning from the holiday break.

New confirmed case counts have been breaking records by the day in the state, topping 76,500 on Thursday, Hochul said at a news briefing.

An average of 53,000 New Yorkers a day tested positive in the week that ended Thursday, compared to 13,000 per day two weeks earlier. Over 7,900 people with COVID-19 are hospitalized statewide, up 67% in a week.

HERE’S WHAT YOU NEED TO KNOW TODAY ABOUT THE CORONAVIRUS PANDEMIC:

— US children hospitalized with COVID in record numbers

HERE’S WHAT ELSE IS HAPPENING TODAY:

AUSTIN, Texas — Texas officials on Friday requested federal aid for increased COVID-19 testing and treatment following reports that the state is running low on the antibody treatment that has proved most effective against the omicron variant.

In a statement, Gov. Greg Abbott said the Texas Division for Emergency Management and the Texas Department of State Health Services made the request.

They are seeking federal resources for additional COVID-19 testing locations in six counties, increased medical personnel and more sotrovimab, the monoclonal antibody treatment that has proved most effective against the more-transmissible omicron.

Abbott called on the Biden administration “to step up in this fight and provide the resources necessary to help protect Texans.”

On Monday, the Texas Department of State Health Services said that regional infusion centers in some of the state’s largest cities — Austin, El Paso, Fort Worth, San Antonio and The Woodlands — “have exhausted their supply of sotrovimab.”

The scarcity stems from a national shortage of the treatment, according to the agency. The centers are expected to receive new shipments in early January.

GAITHERSBURG, Md. — Novavax Inc. said it filed data Friday with the Food and Drug Administration to support clearance of its long-anticipated COVID-19 vaccine, a different kind of shot than current U.S. options.

Novavax said the data package is the last requirement before the company formally submits its emergency-use application next month to become the fourth U.S. COVID-19 vaccine. The announcement comes shortly after the European Commission and World Health Organization cleared use of the Maryland-based company’s two-dose shot.

Novavax developed a protein vaccine, similar to shots used for years against other diseases and a strategy that might appeal to people hesitant to use COVID-19 vaccines made with newer technologies. But Novavax, a small biotech company, faced months of delays in finding manufacturers to mass-produce its vaccine.

The Serum Institute of India currently is manufacturing the vaccine. Novavax has lined up additional production facilities in the Czech Republic, South Korea and elsewhere that are expected to eventually add to supplies.

In studies of tens of thousands of people in the U.S., U.K. and Mexico, the vaccine proved safe and 90% effective against symptomatic infection from earlier coronavirus variants. A booster dose six months later revved up protection against the recent delta variant. Novavax says it is currently testing how the shots hold up against the newest scourge, omicron.

The vaccine is made with lab-grown copies of the coronavirus spike protein and mixed with an immune-boosting chemical.

Klopp did not name the trio and remains hopeful the game will go ahead.

A continuing coronavirus outbreak at Newcastle led to its EPL game at Southampton on Sunday being postponed. That brought the total to 18 EPL games postponed in three weeks.

The French league postponed the home game between Angers and Saint-Etienne on Jan. 9 because of 19 coronavirus cases in the Angers squad.

ROME — Italian health officials are warning that the rate of occupation by COVID-19 patients of hospital beds both in intensive care units and in regular wards has surpassed the “critical level” nationally.

A top Health Ministry official, Gianni Rezza, also said on Friday evening that the incidence of cases is growing, with 783 confirmed COVID-19 infections per every 100,000 residents in Italy. The country hit another high for daily new caseloads — 144,243 confirmed cases in the last 24 hours.

Nearly 12% of some 1.234 million swab tests conducted since Thursday resulted positive, according to the ministry, which urged vaccinated persons to get a booster shot if they are eligible.

With the nation slammed by a surge of infections largely driven by the omicron variant, the government banned public New Year’s Eve celebrations.

LONDON — New figures from Britain’s official statistics body estimate that about 1 in 25 people in private households in England had COVID-19 in the week before Christmas, as the highly transmissible omicron variant spread rapidly across the country.

The number jumped from 1 in 45 in the previous week, the Office for National Statistics said Friday.

One in 25 is the equivalent of about 2 million people with coronavirus in England, the highest number since the statistics body began estimating infection levels in May 2020.

The figure was even higher in London, the British capital, where officials said around 1 in 15 people was likely to test positive for the coronavirus in the week to Dec. 23.

The record-shattering 8,882 cases confirmed by the South Carolina Department of Health and Environmental Control comes less than a year after the state marked its previous high of 7,686 cases in early 2021.

The state has seen significant rises in the number of people hospitalized and on ventilators in the past week. Hospitals are managing the increase, but the rise in cases has strained staff, Simmer said. Some emergency rooms and urgent cares are already getting overwhelmed, with wait times increasing, he added.

A third of the state’s hospitals reported critical staffing shortages to the U.S. Department of Health and Human Services on Thursday.

DALLAS — Flight cancellations surged again on the last day of 2021, with airlines blaming it on crew shortages related to the spike in COVID-19 infections.

By late morning Friday on the East Coast, airlines scrubbed more than 1,300 flights, according to tracking service FlightAware. That compared with about 1,400 cancellations for all of Thursday.

The disruptions are likely to inconvenience hundreds of thousands of air travelers over the New Year’s holiday weekend. Canceled flights began rising shortly before Christmas.

The remnants of the delta variant and the rise of the new omicron variant pushed the rate of new daily infections in the U.S. well above 200,000 a day, according to figures from Johns Hopkins University.

LISBON, Portugal — Portugal has set a new record for daily COVID-19 cases, officially reporting Friday almost 31,000 new infections. It was the fourth straight record-breaking day and up from almost 28,700 on Thursday.

Portugal has witnessed a steep rise of cases recently, blamed by officials on the highly infectious omicron variant. At the start of December, Portugal was reporting fewer than 3,000 cases a day.

But officials say the country’s vaccination rate of around 87% of the population has kept the pressure off hospitals and kept fatalities low.

The health ministry said hospitalizations due to the coronavirus dropped by 10 to 1,024, while 145 people were in intensive care — one more than Thursday. It reported 18 deaths.

However, the Dr. Ricardo Jorge National Health Institute said it was likely that the strain on health services would grow.

SYDNEY — In many places, New Year’s Eve celebrations were muted or canceled for the second straight year due to a surge of coronavirus infections, this time driven by the highly contagious omicron variant.

Even before omicron hit, many people were happy to say goodbye to a second grinding year of the pandemic.

But so far, at least, the omicron surge hasn’t resulted in the same levels of hospitalizations and deaths as previous outbreaks — especially among vaccinated people — offering a glimmer of hope for 2022.

Australia went ahead with its celebrations despite an explosion in virus cases. Thousands of fireworks lit up the sky over Sydney’s Harbor Bridge and Opera House at midnight in a spectacular display.

Hours before the celebrations began, Australian health authorities reported a record 32,000 new virus cases, many of them in Sydney. Because of the surge, crowds were far smaller than in pre-pandemic years, when as many as 1 million revelers would crowd inner Sydney.

Neighboring New Zealand had earlier opted for a more low-key approach, replacing its fireworks show in Auckland with a lights display projected onto landmarks including the Sky Tower and Harbor Bridge.

The regional health authority said Friday that it expects within days to surge past the mark of 50% of intensive care beds occupied by COVID-19 patients. The Paris region normally has about 2,000 intensive care beds but can create more by canceling non-urgent surgical procedures. Paris region hospitals had already started that process but have now been instructed to speed up cancellations.

The region’s hospitals had about 740 COVID-19 patients in intensive care on Friday, up from about 600 a week ago. The regional health authority said the decision to clear more beds for COVID-19 patients is also driven by skyrocketing infection rates in Paris, including the doubling in a week of the incidence rate among people aged 65 and above.

ISTANBUL — Turkey’s health ministry is allowing a fifth dose as a booster for people who’ve received two doses each of Sinovac and BioNTech vaccines.

Healthcare workers and people above 65 started off their inoculation early this year with China’s Sinovac’s inactivated vaccine. They became eligible for a third and fourth doses with Pfizer-BioNTech’s mRNA vaccine in response to the highly-contagious delta variant.

The fifth “reminder” dose would be available for people who had their fourth shot three months prior and appointments were opened Friday. Turkey is offering the two vaccine brands and began administering its domestically-produced inactivated vaccine Turkovac this week.

ISLAMABAD — Pakistan’s planning minister says his country has achieved a goal of fully vaccinating 70 million people by the end of 2021.

The announcement Friday comes as Pakistan has recently stepped up its vaccination campaign as the new omicron variant spreads.

Planning Minister Asad Umar took to Twitter to thank the health workers who worked to meet the goal.

Since last year, Pakistan has administered 155 million COVID-19 vaccine doses, fully vaccinating over 70 million in the South Asian nation of about 220 million people. It brings the vaccination rate to 44%.

Pakistan so far has mostly relied on Chinese vaccines, though it also has received millions of doses of vaccines under the COVAX scheme.

LONDON — Officials have warned revellers in Scotland and Wales to think twice before traveling to England to ring in the new year, highlighting how the four parts of the U.K. were again taking starkly different approaches to coronavirus restrictions amid record-high infections and soaring hospitalizations.

Prime Minister Boris Johnson has resisted tightening restrictions in England despite the rapid spread of the highly transmissible omicron variant, instead focusing on frequent self-testing and an expanded vaccine booster program to control the spread of infections.

Meanwhile Scotland, Wales and Northern Ireland, which set their own public health rules, imposed new restrictions this week that closed all nightclubs and limited social gatherings. Bars and pubs have had to return to table service only. In Edinburgh, which traditionally hosts one of Europe’s largest New Year’s Eve parties, people have been urged to stay at home.

While no formal travel ban is in place to stop Scottish party-goers from making their way to England on Friday, Scotland’s deputy leader John Swinney said travelling would be the “wrong course of action.”

Opinions have been divided on whether Johnson’s Conservative government was taking a risky gamble in not enforcing tougher coronavirus measures in England as the omicron variant drives infections to record high numbers.