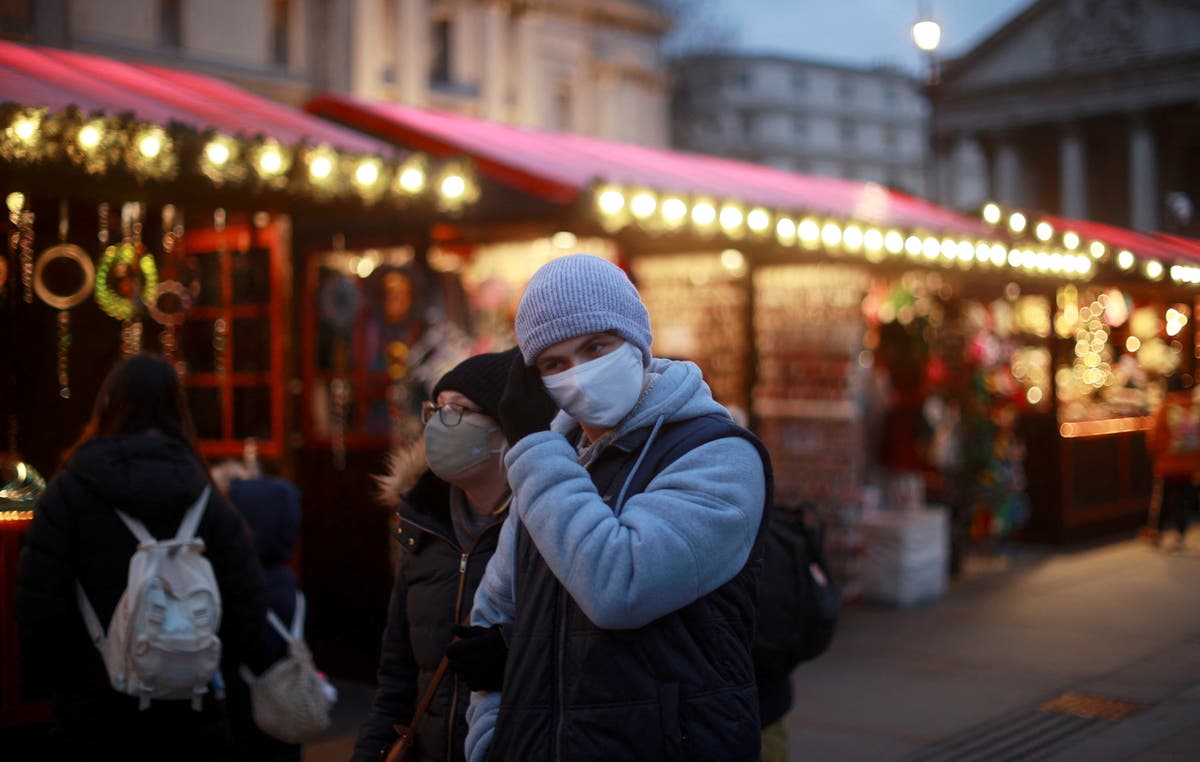 The emergence of the Omicron variant is causing concern around the world, not least because it is thought to be highly transmissible and because the 32 mutations of its spike protein suggest it might be able to resist current vaccines.

The UK has recorded more than 177,000 confirmed cases of the strain so far and at least 49 deaths, prompting fresh fears that more severe social restrictions could soon be imposed on the British public.

Although many scientists believe the new variant is milder than previous mutations, it remains unclear how many of the record number of people infected will end up in hospital, severely ill or dying.

Prior to Christmas, prime minister Boris Johnson said that no further restrictions would be introduced ahead of the holiday, explaining that “that people could go ahead with their plans”, a decision that allowed him to avoid a repeat of his notorious address of 19 December 2020, when he reluctantly imposed tough new measures at the last minute and dashed the festive hopes of millions.

He spoke on the same day that chancellor Rishi Sunak announced £1bn in support for the hospitality industry after customers cancelled reservations en masse in response to the latest twist in the pandemic.

Since then, the government has ruled out the possibility of imposing further Covid restrictions in England before the new year. On Monday 27 December, health secretary Sajid Javid confirmed that the prime minister had decided not to bring in any new measures this week, but said that ministers would continue to monitor the data carefully to determine whether more controls would be needed in January. He added that Omicron was now responsible for 90 per cent of new cases across the UK.

Meanwhile, in Scotland Nicola Sturgeon announced fresh restrictions on sporting events and large gatherings and cancelled Edinburgh’s annual Hogmanay street party, having already asked Scots to keep household mixing to a minimum over the holidays. Wales and Northern Ireland have also imposed new curbs, closing nightclubs and limiting hospitality to the rule of six and returning to table service only.

In his video message from Downing Street on 21 December, Mr Johnson said: “We can’t rule out any further measures after Christmas – and we’re going to keep a constant eye on the data, and we’ll do whatever it takes to protect public health.”

The announcement came a day after he told reporters that the government was still deciding whether or not to impose further additional measures.

He said ministers were monitoring the data “hour by hour” and that the arguments for taking further action were “very, very finely balanced”.

“Unfortunately I must say to people that we will have to reserve the possibility of taking further action to protect the public, to protect public health, to protect our NHS,” he added.

“We are looking at all kinds of things to keep Omicron under control and we will rule nothing out.”

The prime minister is understood to have been waiting for more data on the variant to become available before he made a decision, a stance that saw him accused of “dithering” by scientists and his political opponents.

By contrast, London mayor Sadiq Khan was decisive when he declared a major incident over the extent of the outbreak in the capital on 18 December, while NHS England announced a return to its highest level of emergency preparedness, level four national incident, meaning that the health service’s response will be coordinated as a national effort, rather than led by individual trusts.

Overall, the UK added another 129,471 infections in 24 hours on Tuesday, a record high for this pandemic. That compares to about 27,000 cases this time last year.

Chief scientific officer Sir Patrick Vallance is said to have led the call for fresh measures to drive down infection rates and ease the pressure on the NHS, but these have so far been resisted by senior Cabinet ministers loathe to further jeopardise the economy and constrain individual freedom without more data to justify it.

Sir Patrick’s fellow advisers have been equally outspoken, with Professor Stephen Reicher, a member of the government’s Scientific Advisory Group for Emergencies (Sage), warning that Omicron is “coming at us like an express train” and insisting that the government must give the public a “good, clear message” about how “serious the crisis is”.

The prospect of introducing a two-week circuit-breaker lockdown after Christmas has been mooted – and appears to be broadly popular with the public – with plans made available to ministers for consideration and apparently including a ban on meeting others indoors except for work purposes and limiting pubs and restaurants to outdoor service only.

It is clear the PM hopes the take up of booster vaccines, along with the partial “Plan B” restrictions recently introduced, will be enough to see off the threat.

As part of those measures, Britons are currently again being ordered to wear face masks in shops, cinemas, theatres and places of worship and on public transport, to work from home order where possible.

The government has further revised its approach to vaccine booster jabs, planning to make them available to all over-18s by the end of December and halving the amount of time between second and third injections from six months to three, all in the hope of staving off the feared “tidal wave” of infections we are already beginning to see. According to government data, nearly 32,700,000 people have received a booster jab to date.

Some form of “Plan C” – a circuit-breaker, or tighter restrictions – could be necessary if Omicron starts to disrupt the NHS over the festive season, but there is little political appetite for any kind of fourth national lockdown.

Even before Omicron began to cast its sinister shadow across the globe, many Britons were already glancing anxiously towards the continent as Austria and the Netherlands reintroduced lockdowns in response to spiking cases of Covid-19.

The World Health Organisation (WHO) had said it was “very worried” about the spread in Europe and warned 700,000 more deaths could be recorded by March unless urgent action is taken, bringing the total to 2.2 million since the pandemic began.

Prior to the latest worrying developments sparked by omicon, Mr Johnson’s government had been deeply reluctant to reimpose restrictions at all, despite consistently high case numbers.

While the vaccines have consistently kept death rates low since the spring, infection levels have remained consistently high, typically hovering around the 40,000-per-day mark but in recent days have been more than double that.

Mr Johnson may also be concerned that further restrictions might lead to social disorder, having seen anti-lockdown protests – some of them violent – erupt in Austria, the Netherlands, Belgium, Switzerland, Denmark, Italy and Croatia.

Londoners were certainly unhappy about the initial return of the mask mandate, accusing the PM of hypocrisy for declining to wear one himself at several public engagements.

However, in other quarters, there appeared to be a clear appetite for new restrictions even before Omicron, at least according to the polls.

A recent survey of 900 managers and 1,200 employees carried out by Hack Future Lab found 53 per cent would welcome a “festive lockdown” for the sake of their own well-being after struggling to come to terms with the return to ordinary working conditions, often finding themselves forced to take on extra tasks to cover for absent colleagues.

Another poll by Savanta ComRes revealed 45 per cent of adults would be in favour of a selective lockdown targeting only those who had declined to get their Covid jabs and therefore could pose an ongoing risk to others.

But, until Omicron threw a fresh spanner into the works, there was a credible case for believing that the UK was in such a strong position that it could avoid the worst of the outbreak marauding across Europe.

Although Britain’s infection rate has remained high for months, it has also been highly stable until recently, lingering at a seven-day average of around 600 daily cases per million people, whereas Austria and the Netherlands have suddenly spiked to 1,500 and 1,250 respectively from well below that starting point since the beginning of October.

Part of the reason for this is that the UK was hit by the more infectious Alpha and Delta variants of the coronavirus sooner and was therefore able to tackle them ahead of its European neighbours and unlock earlier.

Heathrow and Gatwick: The only 3 countries letting Brits in without a vaccine