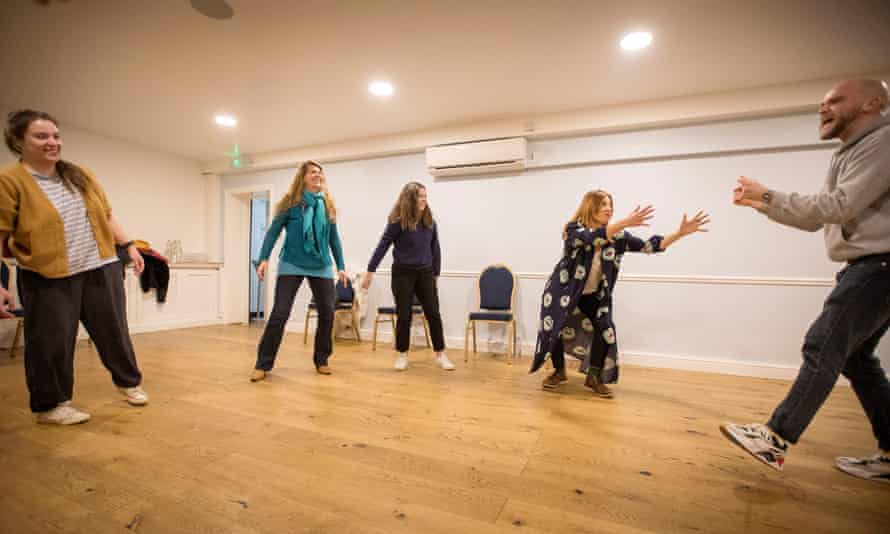 I am in the pub. It is dark, loud and at full capacity. Sitting with a group of people, my mind drifts towards something funny that happened at work. I wonder if it is funny enough to repeat and, if so, how it would sound if I were to say it out loud. I mouth the story to myself, word by word, trying out different intonations.

Further inane questions skip through my mind. How do I start the story? Do I provide dialogue? Do I do voices? Under the table, my hands rehearse the accompanying gestures. Just as I am about to speak, I sense an ambient dread rising up, like reflux. I blush and the conversation moves on.

I am not always this anxious on a night out – jokes sometimes land, ripping yarns are occasionally told – but I would love to be able to tell a simple story without enduring all … this. Although it has never been clear exactly what “this” is, a pattern has emerged over the years: talking, to a number of people, usually in a loud or public setting, isn’t easy for me. It could be social phobia, or stage fright; perhaps a bit of both. Whatever it is, I want it to stop.

With this in mind, I did something people like me rarely do and signed up for an improv class. I soon found myself alongside six people in a well-lit room inside the Irish Centre in Camden, north London, one Thursday evening, ready to be cured.

There is a sizeable industry dedicated to helping (or making a few quid) people like me: TedX Talks; apps such as Speeko; toastmaster courses. I chose improv because it’s real – you can’t stage something that literally takes place on the stage – but also because it has been around for ever. From the Italian Commedia dell’arte to the House of Commons, the ability to think and perform on your feet, script-free, is a skill that can lead to greatness. And who doesn’t want to be great?

The Free Association is the UK’s largest improv theatre group. Founded in 2015, the FA now trains several thousand students a year in rooms above pubs in north-east London. There is a syllabus and a handbook; students have to learn the fundamentals in order to graduate from one level to the next – there are five in total – performing as they go. Many go on to form groups and perform at ticketed events.

Sitting with the others in a circle, I notice the room is rigged for activity: bottles of water, open windows (because it gets hot), everyone in practical shoes. The attenders, aged between 20 and 50, make small talk and I soon feel that familiar dread. I try to think about the worst that could happen (shame?), but, alas, terror doesn’t care for logic. I want to leave.

The host, Scott, has us warm up with physical bonding exercises: Vroom, Screech (where we pretend to be cars – funnier than it sounds); a mnemonic game (Memory, but with mimes); and my favourite, the Story Game, where players bat single words between them to tell a tale. Ours involves a llama, deep societal poverty and a Saw-like death using a corkscrew. Water is drunk; more windows are opened.

We are then paired up to play “Yes, and”, a call-and-response activity designed to help build scenes. Pointing at random objects in the room, my partner and I riff off each other. “The chair is blue,” she shouts. “Yes, and it’s ugly,” I cry out. The bedrock of improv, “Yes, and” prevents you from stalling in a scene, but it also encourages you to talk. In life, the loudest hog the floor; with “Yes, and”, you have no choice but to speak.

Scott started doing improv after Wikipedia-ing his favourite comedians to see how they started out. While he now performs on stage, he credits improv with providing him with “a general fuck-it-ness approach” to life. “I’ll be shy until the day I die, but improvising has this strange way of making me less scared of the world,” he says. “Like, I don’t know what’s going to happen, but what’s the worst that can happen?”

Successful improv sketches hinge on a kind of telepathy among players, but at our level the key is “active listening”. Rather than waiting for your turn to talk, you pay attention, make eye contact and forget that it is your turn until it is. Translated to real life, it is a bit pie-in-the-sky (you can’t surround yourself with excellent listeners), but it is a good reminder that the problem is not always you.

I am not sure when I started struggling to talk in front of groups, but I usually chalk it down to a few difficult moments I would rather forget. The time at university when I appeared in a Pinter play and ruined a key pause with the sound of my prop flapping loudly and nervously in my hand. The time I was celebrating my 10th birthday over pizza and became so overwhelmed by the attention that I had to run to the loo to throw up. Or even the time last year when I tripped spectacularly over my words while trying to explain to my in-laws what it is I do for a living. The situation changes, but the anxiety remains: boring but pervasive.

Over the years, I have tried to investigate it, but to little effect. I used to have a stammer, but I grew out of that in my teens. I definitely mumble, but have sharpened my diction over the years. Clearing out my childhood home last year, I found a picture of a tiger with the words “I’m scared so mush of the world” written inside a speech bubble, drawn when I was six. My therapist thinks I was born cursed.

The only thing I hate more than talking in front of an audience is people who do it well – so it is remarkable that I would have a baby with one of those people. But while I begrudge the ease with which my boyfriend can discuss big pharma on Canadian radio (he, too, is a journalist), it is the everyday stuff that really pains me. The sparkling small talk at soft play; the dinner-table gags; his ability to recount mundane details of his everyday life in a pub without fear of friends switching off, or his disregard if they do.

Perhaps the answer is this – not caring. Like avant garde theatre, improv follows the tenet that performing in order to entertain your audience is a lowering of one’s artistic standards. It is about what happens on stage – and to hell with who’s listening. This so-called “fuck-it-ness”.

The class is wrapping up. It is only when Scott congratulates us for turning up that I realise everyone is actually like me. Some are even worse. The woman to my left joined because she wants to be a comedy writer, but the one next to her joined because she is “crap at public speaking”. On the one hand, improv is the basis of the modern US comedy landscape, but in a society that considers it a moral virtue to be able to communicate in public, improv also has a 12-step side to it. People come to be healed.

The final piece is performed on stage. Standing in threes, we play the one-word game as if – stay with me here – we were a “three-headed wild-swimming nun”, answering audience questions about our favourite stroke, or how we have aligned our faith with cold-water swimming. Five hysterical minutes later, I return to my seat, stunned that I survived, yet barely able to remember what happened. Most baffling of all, I am sad to no longer be on the stage.

The following week, at a friend’s gallery opening, I start telling a story about a train journey. Slowly, people gather. I still sweat and trip over words, but ultimately finish the tale – not quite healed, but without dying in the process.