A provincial tribunal has rejected a neighbour’s challenge to a new affordable housing project on a dead-end street south of London’s downtown. 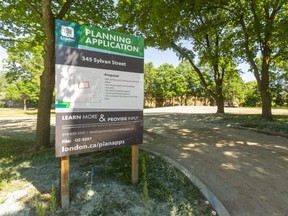 A tribunal has rejected a neighour’s challenge of the city’s plan to build affordable housing on the site of a former group home at 345 Sylvan St. near Wellington Road and Base Line Road. (Mike Hensen/The London Free Press)

A provincial tribunal has rejected a neighbour’s challenge to a new affordable housing project on a dead-end street south of London’s downtown.

The City of London plans to build a 42-unit apartment building at 345 Sylvan St., near Base Line and Wellington roads. In March, city council approved a rezoning for the property that it bought for more than $1 million about three years ago.

The Ontario Land Tribunal, previously known as the Local Planning Appeal Tribunal and Ontario Municipal Board, tossed out an appeal from a nearby homeowner that was filed in May.

“While the (neighbour) presents as a genuinely concerned citizen of the municipality, he has simply not adduced any evidence upon which the tribunal could rely to allow the appeal,” Richard Makuch, a vice-chair of the Ontario Land Tribunal, wrote in his dismissal of the appeal.

Dustin Gosnell had argued the property should be turned into a park or other space to serve the community, particularly with many new residents moving into other developments.

“ While I recognize some of the neighbours have concerns about the change in the use, this really is a low intensification of the site that provides affordable housing at the same time,” Ward 11 Coun. Stephen Turner, who represents the neighbourhood, said.

“ It’s always a delicate balance to promote complementary development, affordable housing and the needs of the community,” Turner said.

The property is “far more suitable for a low-rise building that could house a number of people” than it is for parkland, he said.

It wasn’t swayed by Gosnell’s argument about a lack of neighbourhood park space, either.

“‘Parks planning’ on a city-wide basis . . . is a very different exercise than designing and siting an outdoor amenity space in response to a development application, for the purpose of serving the immediate residents,” Makuch wrote.

The five-bedroom home that once sat on the lot at the end of Sylvan Street has been demolished. Before city hall bought the lot in 2019, the house was operated as a group home.

City officials had hoped to turn it into a “stabilization space,” where people using drugs could sleep, shower, eat and access support instead of being arrested or taken to the emergency room, but later said it didn’t have the funding from senior governments to proceed with that plan.

There are more than 6,000 households on a waiting list for public housing in London, including rent-geared-to-income or other deeply subsidized units. City council also endorsed a target to create 3,000 new affordable units in London by 2026.

The affordable building planned for 345 Sylvan St., which had been stalled by the appeal, is one small element in council’s plan to tackle a growing housing crisis, Turner said.

“We can’t look at one project  and say it’ll solve all the  problems. W e need to look at  everything   we’re doing and say, ‘We’re making a big dent in the challenges of ensuring there’s homes for all,’” he said.