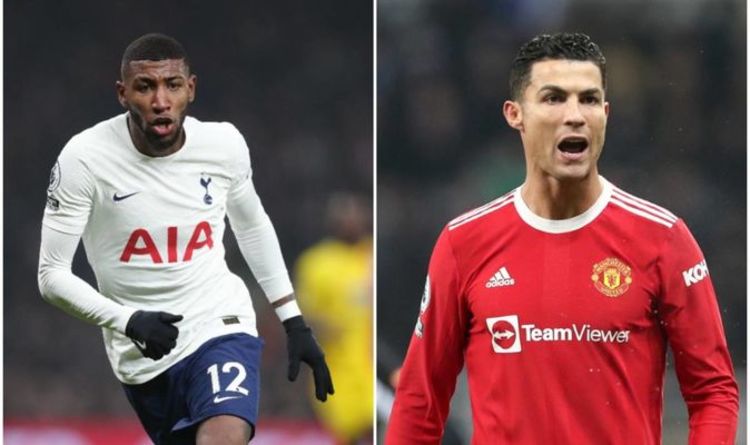 Emerson Royal has snubbed Manchester United star Cristiano Ronaldo when asked to name his toughest opponent so far in the Premier League. Emerson has come up against plenty of difficult players since joining Tottenham in the summer, but one stands out above the rest.

Emerson joined Spurs on a five-year contract from Barcelona on transfer deadline day, with the north London club paying £25million for his services.

The 22-year-old defender has made 15 appearances for the club so far as a right-back or right wing-back.

While Tottenham’s results have improved under Antonio Conte’s management in recent weeks, Emerson joined the side when Nuno Espirito Santo was in charge.

It was a baptism of fire for the Brazilian, who did not taste victory any of his first four games for the club.

JUST IN: Ronaldo and Fernandes blasted by Gary Neville after Man Utd draw

“That’s when the game totally changed. Chelsea are a team that attack very well and defend very well.”

Spurs were level at 0-0 at the break, but the introduction of Kante from the bench changed the match, with the diminutive midfielder scoring alongside Thiago Silva and Antonio Rudiger to give Chelsea a 3-0 win.

“To play the 90 minutes with Chelsea’s intensity, it’s a little difficult,” Emerson concluded.

Emerson also played in another 3-0 home defeat, against Manchester United at the end of October.

Goals from Ronaldo, Edinson Cavani and Marcus Rashford gave United the win in north London, but none of those players stick out as Emerson’s toughest opponent.

That title goes to Chelsea striker Romelu Lukaku, who didn’t get on the score sheet against Spurs but clearly made an impression on Emerson.

Lukaku has had a mixed time since rejoining Chelsea from Inter Milan in the summer for £97m.

He has six goals in 17 appearances altogether, with an injury halting his progress in November.

The Belgian international is back fully fit and has now scored twice in his last three appearances for Chelsea ahead of Wednesday’s match against Brighton.

Romero back, Ndombele heavily involved: Things noticed from Tottenham training ahead of Watford