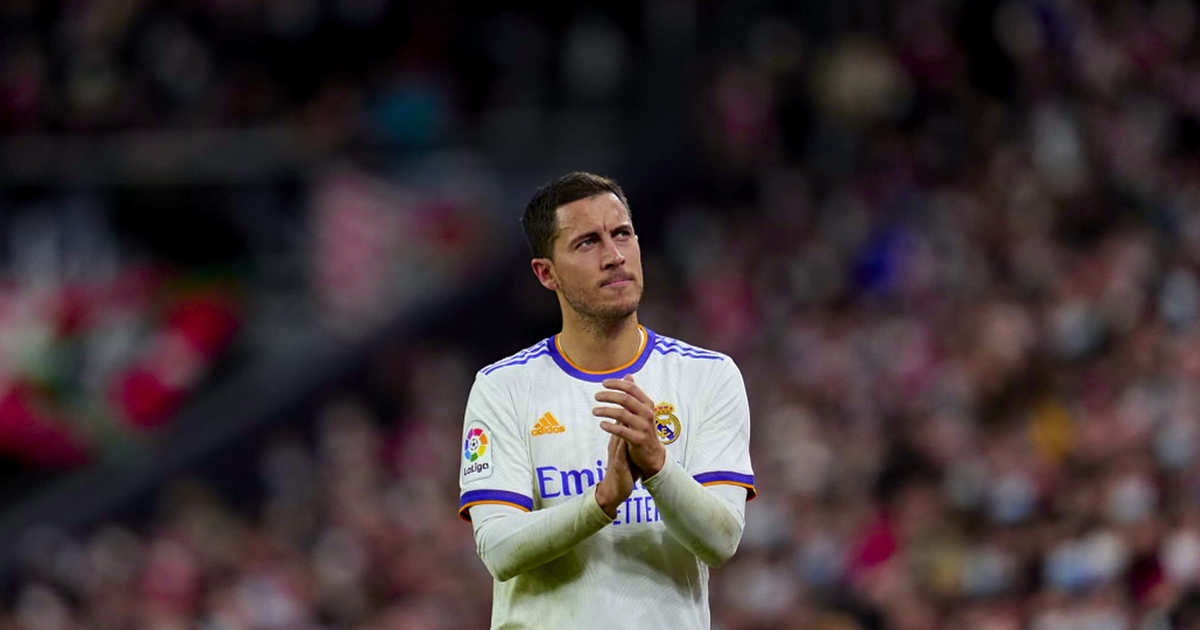 Real Madrid are enjoying an excellent season, finding themselves eight points clear at the top of La Liga and comfortably into the knockout rounds of the Champions League – but they’re still expected to be busy in the January transfer window.

While Real have been linked with the likes of Antonio Rudiger and Kylian Mbappe, Carlo Ancelotti will need to trim his squad to meet strict financial restrictions.

We’ve identified six players that could leave Madrid this January.

Hazard was one of the world’s best-attacking players when he joined Los Blancos from Chelsea for €100million in 2019 – but injuries and a loss of form have dulled his talent.

The Belgium international has scored just five goals in 57 appearances for Real Madrid and angered the club’s supporters by laughing with his former Chelsea team-mates after defeat in the 2021 Champions League semi-final.

The 30-year-old may be best served by finding another club in January and rumours of a return to Stamford Bridge have intensified over the past few weeks.

West Ham are also rumoured to be interested in Hazard’s services, with a reported £25million offer rejected at the start of December.

Eden Hazard with a WONDER GOAL! 😱

Just his second Madrid goal, but what a strike that is! 💥 pic.twitter.com/2uxb39jHCs

It’s been two years since Bale salted the earth at the Bernabeu with that provocative flag and it’s amazing to consider that the 32-year-old is still registered with Madrid in 2021.

He spent the 2020-21 season at former club Tottenham and hasn’t played for Madrid since August.

With his Real contract expiring at the end of the season, the forward may choose to wait until the summer before moving somewhere else.

But perhaps another return to north London could be on the cards? According to journalist Ekrem Konur, a third spell at Spurs is not out of the question if Antonio Conte approvals any deal.

Despite winning a multitude of trophies during his 14-year spell at the club, Marcelo has reportedly been made available for transfer by Real Madrid.

The full-back’s contract expires in the summer of 2022 and Real have no interest in offering him an extension. Brazilian sides Palmeiras and Flamengo have registered an interest in bringing Marcelo back to his homeland this January.

A veteran of 533 appearances, Marcelo has scored 38 goals and set up 101 more for his team-mates during his time at the Bernabeu. But, with game-time becoming increasingly limited, it may be time for the 33-year-old to leave Real.

Isco is somebody who hasn’t lived up to the potential he showed when breaking through and Real Madrid are eager to sell the midfielder.

The 29-year-old has been with Madrid since 2013, when he joined from Malaga, but has found himself out-of-favour with both Zinedine Zidane and Ancelotti.

Having played just seven times in La Liga this season, and with his contract expiring in the summer, Isco has been linked with a host of clubs such as Newcastle United and Arsenal.

But Atletico Madrid and Sevilla, both of whom have reportedly been offered the chance to sign Isco, seem more likely destinations for the Spain international.

With just three goals in 45 appearances, it’s safe to say that Jovic’s time at Real Madrid has been a failure.

But memories of the 24-year-old firing Eintracht Frankfurt to the Europa League semi-finals in 2019 haven’t been forgotten and Borussia Dortmund are interested in signing the striker on an emergency loan deal.

In truth, Jovic has performed well when called upon by Ancelotti this season but it seems clear that his long-term future lies away from the La Liga leaders.

Will Real Madrid ever see this version of Luka Jovic? 🔥pic.twitter.com/yMYXfaaEnn

Real Madrid are interested in signing Sevilla defender Jules Kounde and are reportedly willing to use Diaz in a cash-plus-player-deal to secure their man.

According to a report by Catalan outlet El Nacional, Diaz is keen on joining Sevilla and the 28-year-old forward is valued at around €15million.

Having failed to break into Ancelotti’s starting XI, a move to the Europa League specialists may be the thing that reignites Diaz’s career.

A tribute to Mesut Ozil at Real Madrid: a ‘unique’ assist king

Can you name Real Madrid’s XI from the infamous ‘pig’s head’ Clasico?

Selling one of Britain’s most expensive homes? Try fitting a shark tank!