Omicron’s rapid spread in London is already piling pressure on strained NHS hospitals, according to official data that lays bare the situation the capital faces in the coming weeks.

The city’s Covid hospitalisation rate – which includes patients who are ill with the virus and need medical care as well as ones who incidentally tested positive – rose by 62 per cent in a week in the final seven-day spell ahead of Christmas.

It means London was teetering on the brink of 400 admissions per day before the Government’s Christmas data black-out, a figure thought to be No10’s trigger point for imposing fresh England-wide restrictions.

Despite being just a fraction of the levels seen during the depths of the devastating second wave, medics fear the rate will keep rising because of the time lag between people getting infected and becoming severely ill. Daily case numbers have yet to slow down in the city, and over-60s – who are most vulnerable to the virus – are also seeing an uptick.

The Prime Minister is battling to avoid imposing tough Covid curbs for the New Year, with Tory MPs demanding he doesn’t over-react to the mutant variant.

Boris Johnson is understood to be leaning towards new guidance urging people in England to be careful and limit contacts – rather than imposing legally binding restrictions, such as table service in pubs or limits on household mixing.

But the Government’s stance could change if data on hospitalisations suggests the NHS could be overwhelmed by a wave of infections, like No10’s experts repeatedly warned throughout the festive period.

The PM will today hold crunch talks with his top advisers Professor Chris Whitty and Sir Patrick Vallance to discuss whether legal restrictions are needed ahead of the last social hurrah of 2021. Scotland, Wales and Northern Ireland have already acted to combat Omicron, with people living in the countries today waking to fresh legal curbs in response to spiraling infections.

Official data shows the average number of daily Covid admissions rose 62 per cent week-on-week in the seven days up to December 22 in London, while they jumped 47 per cent in the North West and 39 per cent in the East. Hospitalisations are also on the rise in the Midlands, where they jumped 36 per cent, and the North East and Yorkshire (31 per cent) and the South East (10 per cent). The South West is the only part of the country where Covid admissions are falling, with the number seeking NHS care falling by four per cent 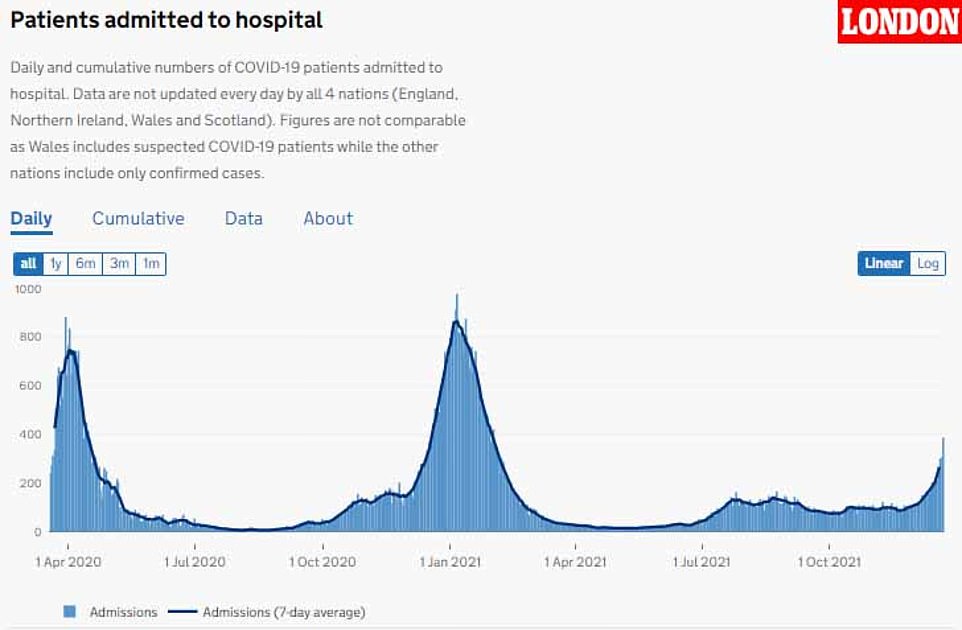 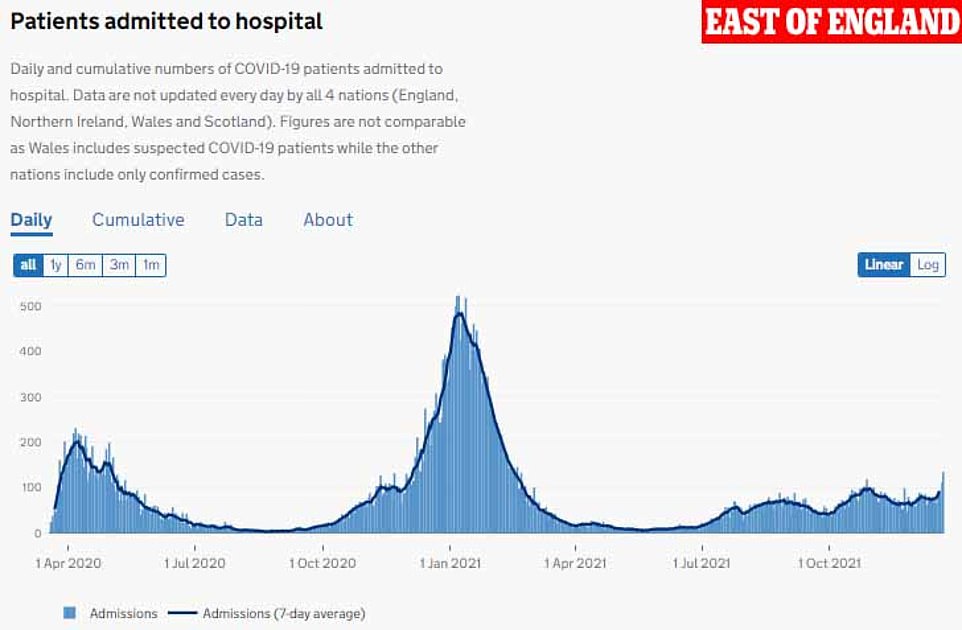 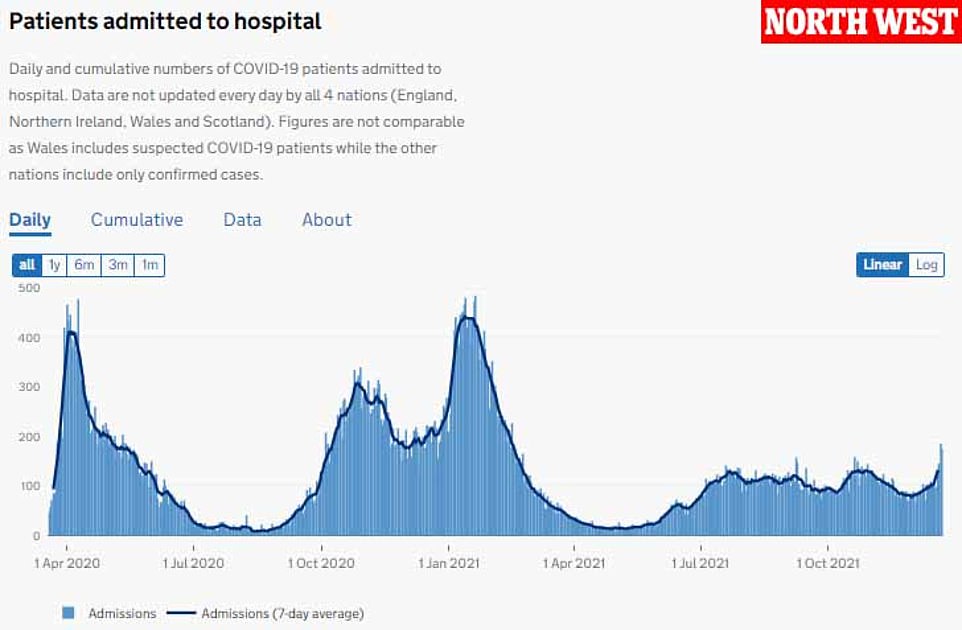 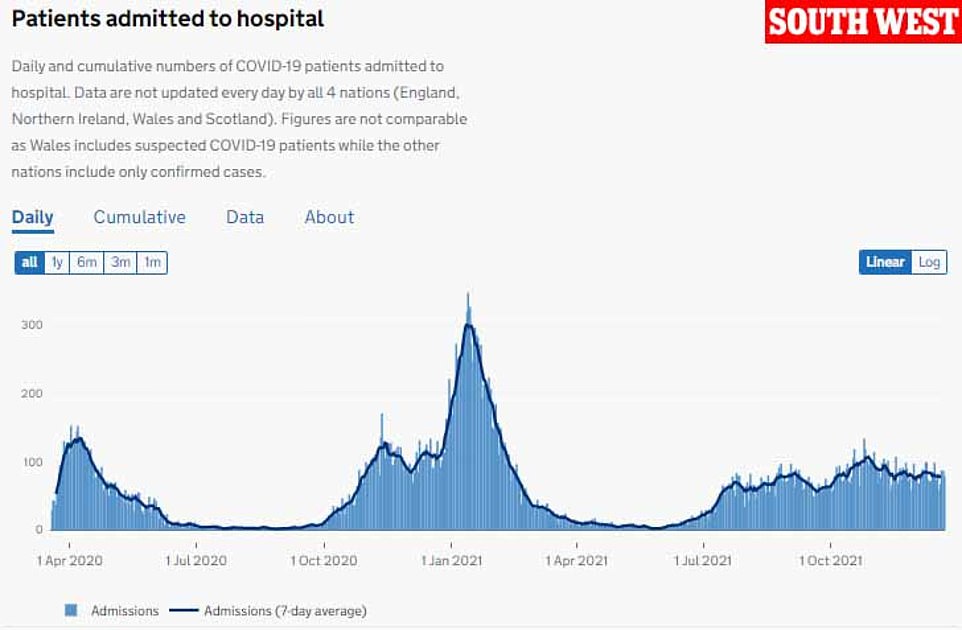 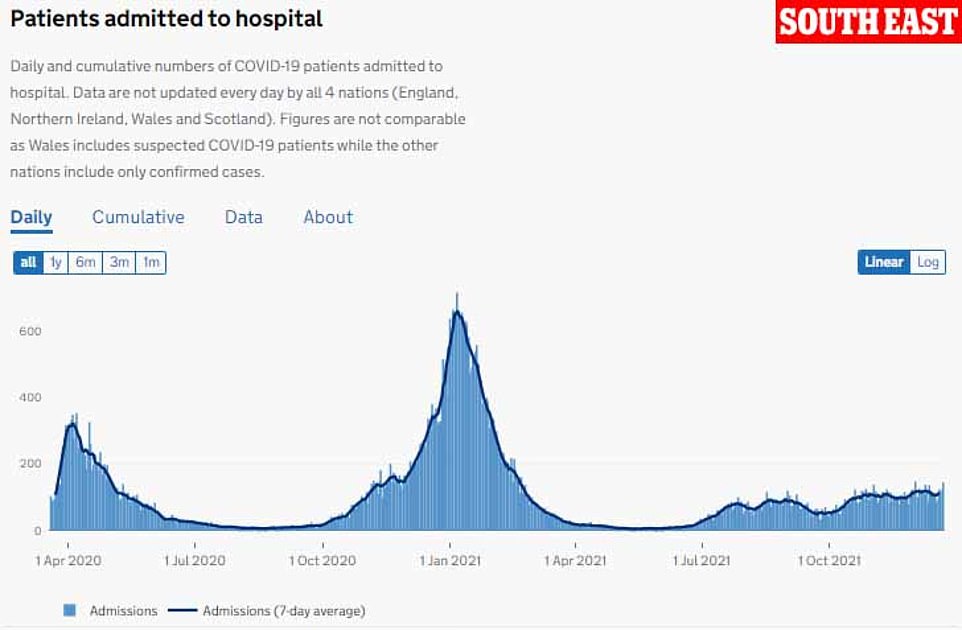 The number of NHS workers absent because of Covid at London’s busiest hospital trust has more than tripled in a week, official figures show as hospitals draw up battle plans to cope with depleted workforce numbers.

Barts Health Trust saw 338 employees off work on December 19 either because they had caught the virus or were isolating, compared to 91 the previous Sunday.

A similar trend was seen across the capital as a whole, where Covid-related absences jumped from 1,540 to 3,874 over the same time-frame. It means the virus now makes up around 43 per cent of NHS daily absences in London compared to just 18 per cent before Omicron spiralled out of control.

It comes as the Prime Minister gets set to hold crunch talks today on whether England should follow the other UK nations and introduce extra Covid curbs ahead of the New Year.

A key part of discussions around extra measures centre on if the health service can cope with an expected spike in infected patients like seen in London, coupled with soaring staff absences.

The NHS was already forced to scrap the requirement for staff who live with someone who has tested positive to self-isolate amid fears the rapid spread of the variant would deplete hospitals and force them to cancel thousands of routine procedures.

As part of its Omicron battle plan, health chiefs have been told to prepare to create temporary field hospitals in existing hospital car parks that will be supported by army medics and redeploy staff.

Omicron is now dominant in every region of England after first blitzing its way through the capital during mid-December.

London’s Covid cases hit pandemic highs of 28,000-a-day before Christmas, with the equivalent of 2 per cent of people living in the capital testing positive in the week ending December 19.

But one of the UK’s biggest surveillance studies estimated the true prevalence in the capital reached one in 20 in the week before Christmas.

In a sign of potential hope however, some experts have suggested London’s outbreak may have already peaked because of a behavioural change over the festive period. Government advisers urged people to scale back social plans to curb the spread of the virus.

But a data blackout over the past 48 hours means the true scale of the situation is unknown. The actual figures – which will be updated on the Government’s dashboard this afternoon – are set to be presented to the PM later today.

Infection rates are also now spiralling in all of the regions of England, according to Department of Health figures that explain why ministers are watching London’s outbreak extremely closely.

And hospitalisation rates have increased in six of the seven NHS districts, despite the full effects of the ultra-infectious variant yet to be felt across the country and even in London.

Only the South West saw a downturn in Covid-infected admissions in the week before Christmas.

Official data shows the average number of daily Covid admissions rose 62 per cent week-on-week in the seven days up to December 24 in London, while they jumped 47 per cent in the North West and 39 per cent in the East.

Hospitalisations are also on the rise in the Midlands, where they jumped 36 per cent, and the North East and Yorkshire (31 per cent) and the South East (10 per cent).

But Tory MPs have poked holes in the crucial figures, which ministers will inevitably use to justify bringing in any tougher restrictions.

NHS statisticians already break down how many beds are occupied by infected patients who are primarily being treated for Covid.

The health service’s data suggests around a quarter of the daily Covid hospitalisation figures released by the Government are incidental cases among patients who are hospitalised for another reason, such as a routine operation or broken leg.

But with Omicron infections now known to be milder, politicians and experts have called for the same daily figures to be recounted to paint a more accurate picture of the situation the NHS faces.

Critics say the NHS is inflating admissions by including patients who were initially brought in for something else such as an accident.

Hospital numbers are a key metric weighed up by ministers to determine if tougher Covid curbs are needed, now that vaccines have taken most of the emphasis away from crude infection numbers.

Officials say Covid-infected patients put extra strain on hospitals because they need to be isolated, regardless of how ill they are.

The virus can also exacerbate existing health problems and later become the primary reason they remain in hospital. 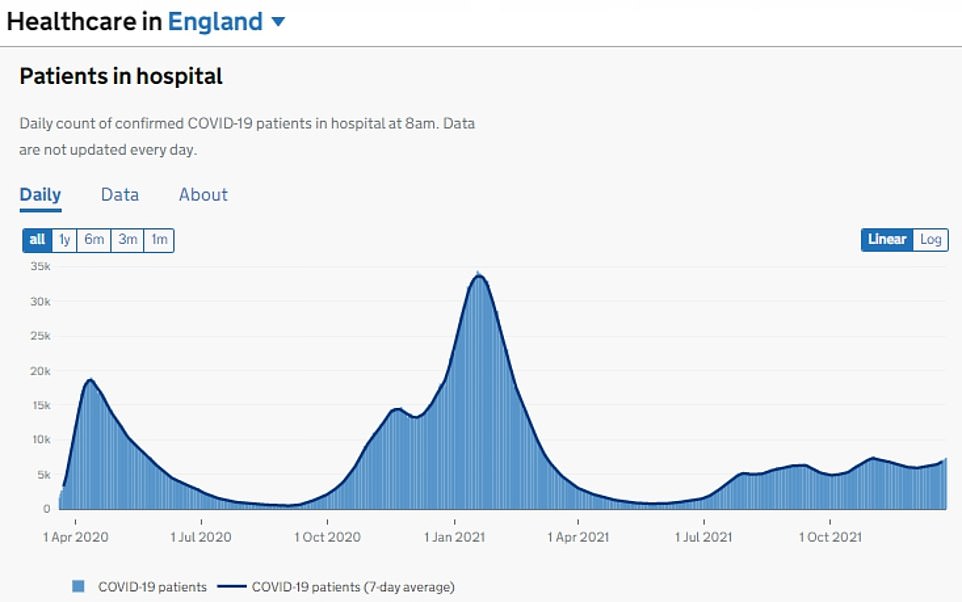 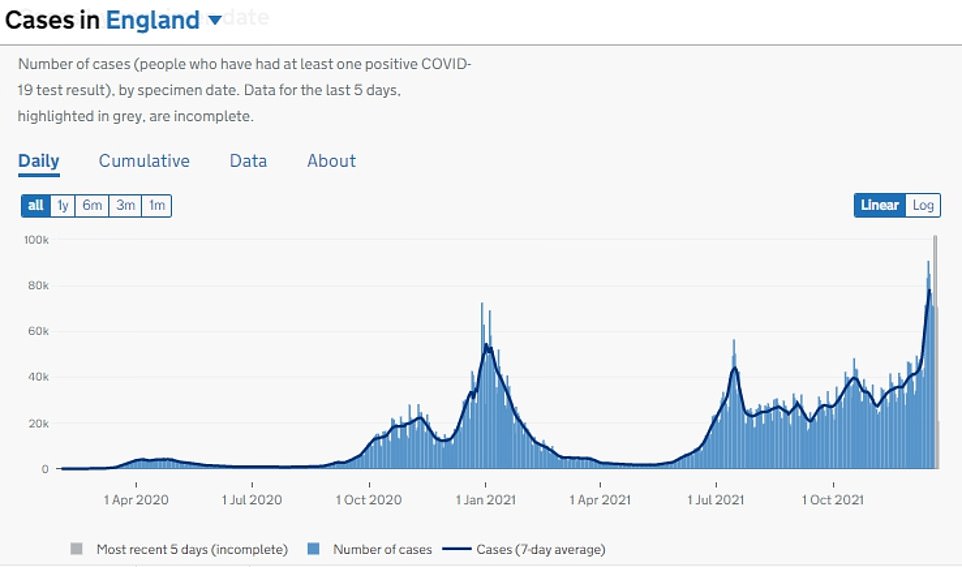 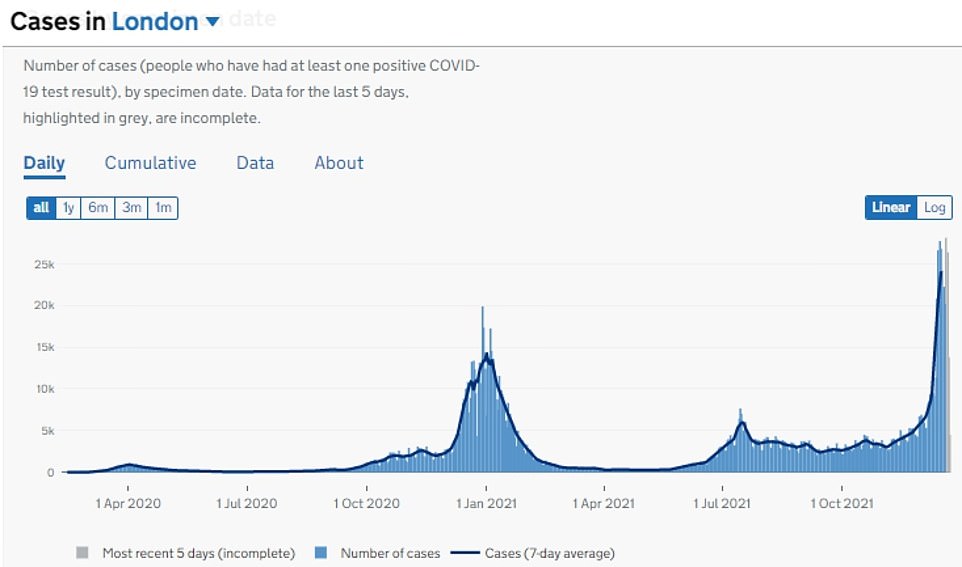 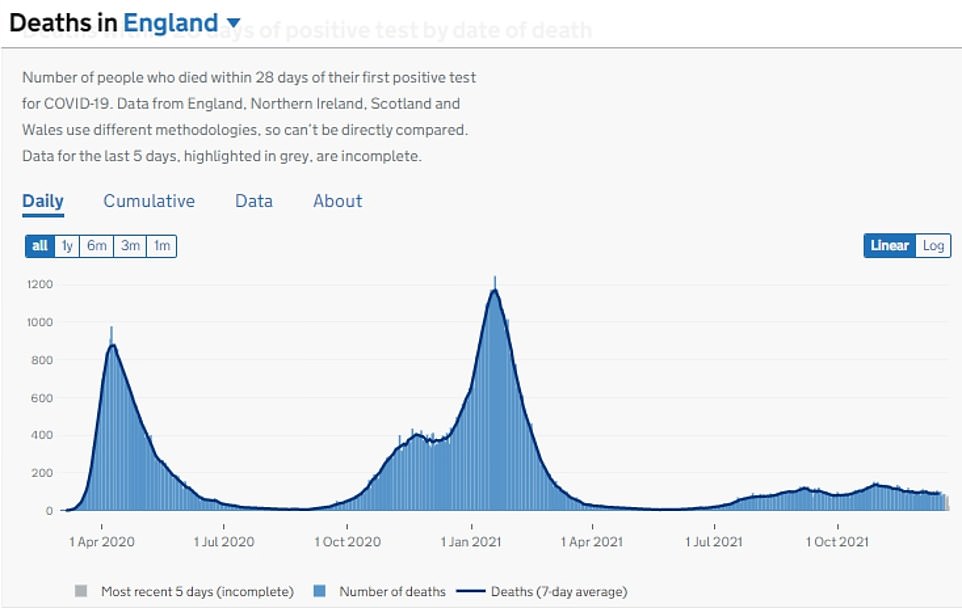 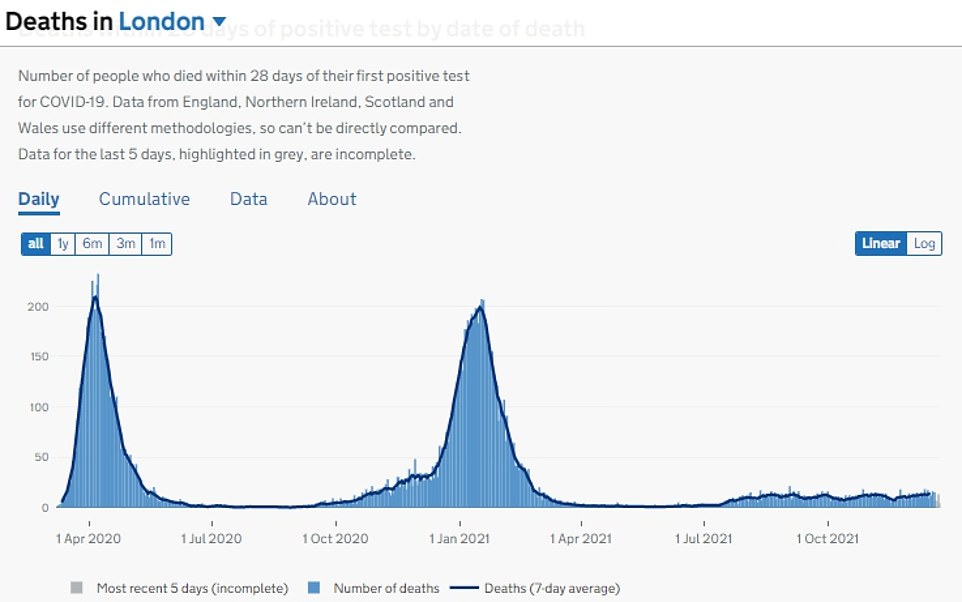 And the NHS data shows they are having to juggle increased demand with fewer staff, as growing numbers of medics are stuck at home with the virus.

The number of Covid-related absences have tripled in a week at London’s biggest trust, underlying the huge problem hospitals face in the coming weeks.

NHS leaders have also been told to prepare to set up field hospitals in existing hospital car parks, as well as pop-up wards in offices and meeting rooms to cope with pressure.

It comes as the Prime Minister is battling to avoid imposing tough Covid restrictions for the New Year ahead of a crunch meeting with scientists today.

Mr Johnson will hold talks with advisers to discuss whether legal curbs are needed to deal with the threat of Omicron.

Downing Street is understood to be leaning towards new guidance urging people in England to be careful and limit contacts – rather than imposing new legally binding restrictions such as table service in pubs or limits on household mixing.

But this could change if data on hospitalisations suggests the NHS could be overwhelmed by a wave of coronavirus infections.

Possible restrictions considered by the PM over the past few days include closing pubs and restaurants indoors, bringing back the rule of six or restricting the number of households meeting indoors, and limiting capacity at mass events.

Any new legally binding restrictions would need the backing of Cabinet, and would have to be rubber stamped by MPs.

But last night sources said the recall of Parliament was looking less likely than it had before Christmas – an indication that Downing Street is leaning away from stricter curbs. If simple guidance was issued, urging people to limit their contacts, this would not need Parliamentary sanctioning or the backing of the Cabinet.