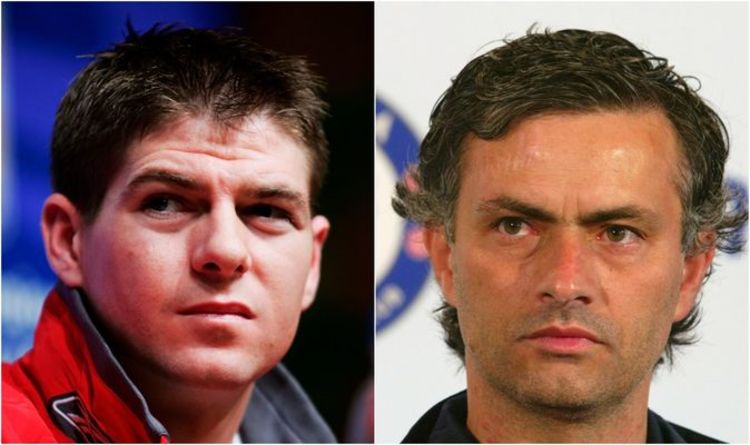 Steven Gerrard has tested positive for Covid and will not travel with his Aston Villa side as they face Chelsea on Boxing Day at Stamford Bridge. However, in the build-up to the match his mind may have been cast back to a well-publicised period in which the Liverpool hero almost joined Chelsea. A curious love-hate relationship ensued between the former midfielder and Blues fans, with Jose Mourinho an outspoken admirer. As Gerrard gears up for his side to return to west London, Express Sport takes a look back at a prospective move that would have dramatically changed the career path of a Premier League legend…

It turned out to be the fifth consecutive campaign in which he notched more than 40 appearances in all competitions, while he also managed 13 goals and a timeless Champions League triumph.

His goal in Istanbul set the Reds on their path to a blockbuster comeback against AC Milan before Jerzy Dudek’s penalty shootout heroics capped off a night for the ages.

But if Jose Mourinho had got his wish, Gerrard’s role in Liverpool’s Champions League win would have doubled up as a farewell.

And for a brief moment during the course of that season, it looked as though Gerrard would take the leap of faith.

A £37.5million bid was supposedly tabled by the Blues, a fee which would not be bettered until Cristiano Ronaldo’s lucrative move to Real Madrid four years later.

After a period of ‘flirting’ with the idea, Gerrard opted to stay put.

When the former England captain’s Premier League career wound down, both Gerrard and Mourinho shed light on what would have been a jaw-dropping move at the time.

“I’ve got huge respect for him [Jose Mourinho]. He’s the best manager in the world,” stated Gerrard in 2015 after being given a standing ovation at Stamford Bridge.

“I would have signed for him three times if I wasn’t a Liverpool fan and Liverpool weren’t in my heart.

“He’s the reason why my head was turned on a couple of occasions, but he understood why I couldn’t do it.

“I did [wonder what might have happened] at the time. But I always said to myself, ‘if I win a couple of trophies at Liverpool, it’ll mean an awful lot more to me than if it was 10 at Chelsea, Inter Milan or Real Madrid’.”

Mourinho, in the midst of his second spell in charge of Chelsea, was not shy in ‘honouring his dear enemy’ after the same game.

“It is because of opponents like him that I am the manager I am,” claimed the Portuguese.

“In England, he is the one that made me a better manager. I have to honour him by saying I’m very sad that he’s leaving [Liverpool].

In the end, Gerrard admitted that he regrets flirting with the idea of leaving Liverpool, although ending his career without a Premier League crown is a sign of his loyalty to the Reds.

Since leaving for LA Galaxy as a player and going on to Rangers as a manager, the 41-year-old made his Premier League return in November as Aston Villa’s replacement for Dean Smith.

A trip to Stamford Bridge is almost always a daunting one, but after a hugely promising start, Thomas Tuchel’s side should prepare to be pushed all the way based on closely-fought contests overseen by Gerrard against Liverpool and Manchester City.

‘I visited Aldi, Tesco and Waitrose and was shocked with the lack of masks in one of the shops’