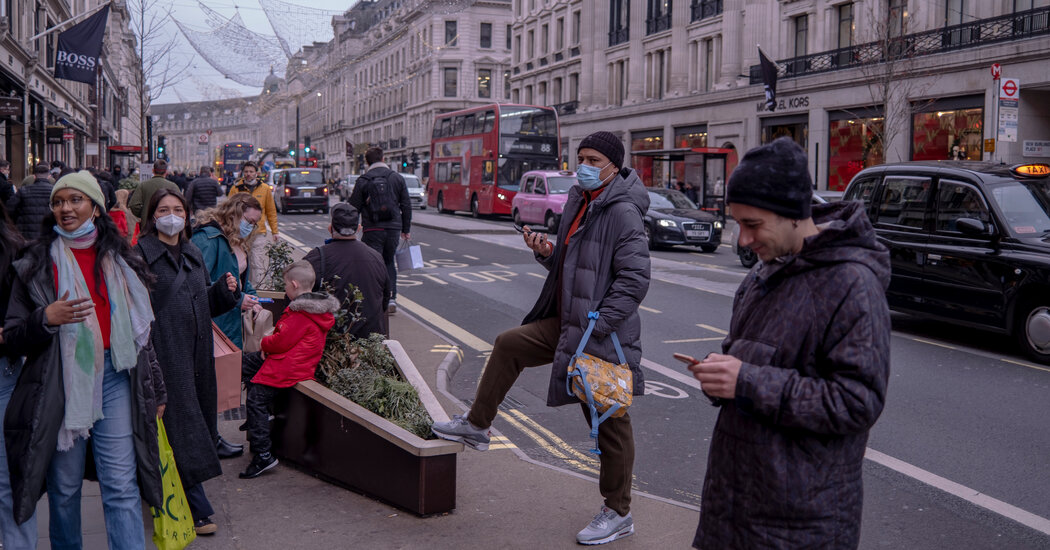 LONDON — Under the exuberant Christmas decorations strung above one of London’s most famous shopping streets, presents filled the arms of three grinning young brothers, the smallest boy struggling to keep a grip on a large yellow toy truck.

“We’re just getting the last few bits, treating the kids to some stuff,” said their grandfather, Stephen Murphy, who, along with his daughter, had brought the boys to Carnaby Street. Despite the latest pandemic wave, he plans to go to another daughter’s home for Christmas dinner.

“We hope this Christmas will be better,” said Mr. Murphy, who lives in northwest London. “Obviously last year was pretty bad.”

A year ago, a catastrophic second wave of Covid-19, lockdowns and fear all but canceled a holiday season that even secular Britons hold sacred, keeping stores closed, pubs dark and families separated.

This year, they are having none of it. By far the biggest — though not the deadliest — coronavirus wave so far is washing over the country, fueled by the Omicron variant. London has been particularly hard-hit, with the mayor already taking emergency measures to shore up the health care system. Even so, the British, mostly vaccinated and wavering between wariness and determined good spirits, are observing new precautions though not hunkering down again.

Majid Khan and his sister, Laraib, milled about in the crowd of shoppers on Carnaby Street, Ms. Khan, 18, grinning widely under the shimmering displays. It was her first visit to the city from their home in northern England.

“We are going ahead with plans as normal to be quite honest, even with all of the restrictions that could potentially be put in place,” said Mr. Khan, 27, acknowledging concerns about coronavirus cases in the city.

A Christmas visit to London is something of a tradition for Mr. Khan, so he wanted to show his sister the city. He said the atmosphere was still festive, and they have both been vaccinated, but added, “it’s just riddled with a bit of anxiety, there’s just a lot of unknowns.”

Christmas shoppers thronged central London this week. But even as their arms heaved with bags, there was an undercurrent to their apparent good cheer. They knew that the festivities could be the last, short window without further coronavirus restrictions.

This is the most anticipated holiday season in recent memory, after so many plans were dashed last year, when London locked down just days before Christmas and the rest of the country soon followed suit. For a year, Britain has had reason to hope that this December the pandemic would be behind them, and it would be a time to reconnect with family, celebrate with friends, and gather in pubs and around kitchen tables.

But then came Omicron, apparently the fastest-spreading variant yet, dimming prospects of a normal holiday season. Last winter’s surge peaked at 68,000 new cases in Britain in a single day, but the current wave has grown much bigger, much faster, repeatedly breaking the daily record. On Thursday, almost 120,000 new cases were recorded.

Though Omicron appears less likely to cause serious illness than other variants, scientists have warned that the drastic rise in cases might overwhelm the country’s health care system. Mask mandates, vaccine passport requirements and tightened travel rules have been announced, but the government has so far resisted a more drastic lockdown.

In a video message on Tuesday, Prime Minister Boris Johnson said there would be no new coronavirus measures introduced in England before Christmas. But he urged caution and did not rule out the possibility of more restrictions after the holiday, and fears of another lockdown persist.

“We hadn’t seen family last year, we sacrificed that once already,” said Mr. Khan, “And I don’t really want to think that we’d have to do that again.”

For some who flocked to London’s busy streets, looming Omicron woes were an afterthought.

For Rachel Powell, who was visiting from northern England with her children this week, the rising cases weren’t a worry.

“It hasn’t spoiled any of our plans yet,” she said, as they paused for a moment under the white, star-shaped Christmas lights dangling above Oxford Street, one of London’s busiest and most elegant shopping avenues.

But for many tourists and Londoners alike, there was a sense that the “carry on” mentality that had seen them through the last several months — when the pandemic had become an afterthought for many — had shifted.

Megan Tattersley, 24, was exploring Covent Garden on the last day of a short visit to London with two friends from Yorkshire in northern England. She said she had felt a noticeable change in attitudes, particularly after the government activated a long-resisted coronavirus contingency plan earlier this month.

“People adapted quickly to that and you see them taking it on board,” she said.

Her group had become used to showing vaccine passes in London venues and were using masks and hand sanitizer more than ever. At the same time, Ms. Tattersley said, the national will for another full lockdown was just no longer there.

She pointed to the recent reports of government parties last year during a time when leaders were advising the public not to meet with family — reports that have landed Mr. Johnson in hot water.

“I think a lot of people are kind of sick of it,” she said. “And there are questions around, ‘Is this variant something we should really be worried about?’” It was hard to navigate all of the new information, she added.

New treatments. The Food and Drug Administration authorized in short succession the first two pill treatments for Covid-19 from Pfizer and Merck. The new drugs, which can be taken at home with a doctor’s prescription, will be available to some Covid patients who are at higher risk of becoming severely ill.

The women said their festive getaway felt like the calm before a storm, and potentially the last chance for a while for fun, as they expected a further tightening of restrictions after Christmas.

“They don’t give you much warning do they?” said Katrina Burt, 23. “So it’s just enjoy what you can while you can.”

In London, signs that things could change are never far from view. Most who crowded the city’s main shopping areas this week were masked, a recent shift.

The smattering of Londoners riding the Tube were nearly all masked this week, a stark departure from just weeks ago when most riders flouted a mask mandate.

They acknowledged that they had been lucky this year to see their normal routines continue, and said they weren’t worried about the soaring cases. But they had found it difficult to get together with their friends who were more cautious about the pandemic.

Ms. Carey-Topping said Britain just needs to learn to live with the pandemic now that so many in the country are vaccinated, likening it to yearly flu outbreaks.

“And we are still living with it and unfortunately people still die of the flu,” she said. “But we still have to carry on our day-to-day lives.”

‘A lot of women are being killed in London but still nothing seems to be happening’: Newham residents react after woman murdered on Boxing...