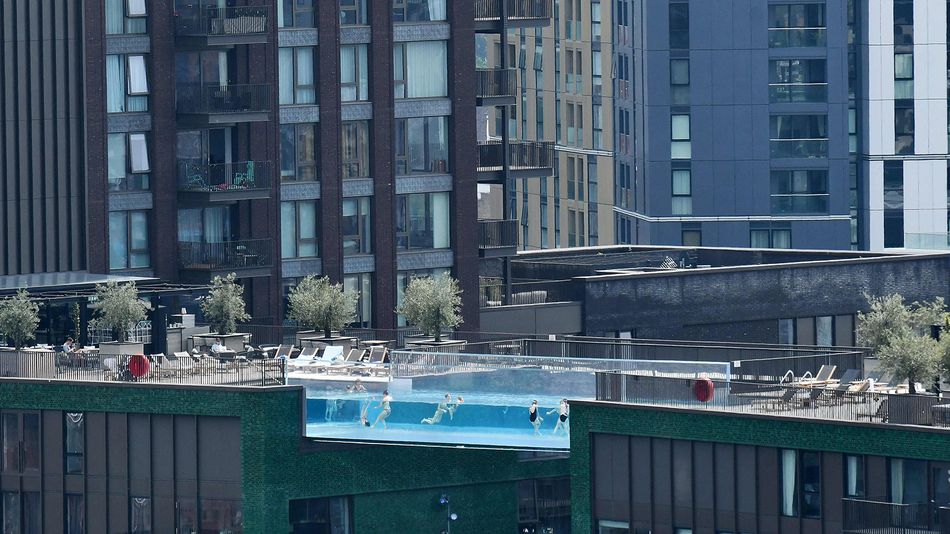 The transparent Sky Pool in south-west London is too cold to swim in, despite it costing a whopping £450 a day to heat.

Residents of Embassy Gardens in the Nine Elms region of Wandsworth have said that only a few people have been brave enough to go swimming in the innovative 25-metre pool, which is suspended 13 floors above ground and connects two buildings.

It is supposed to be covered during the night to make it usable in the winter, but the protection has broken and now the people living in the luxury flats, which cost up to £4.5million, want to shut it to save £164,250 in annual heating costs.

A couple who live in the development told The Sun: ‘It is too cold to be used at the moment so it seems mad that we’re still having to pay to heat it.

The water in the pool is said to be so cold that swimmers can only stay in it for a few minutes before having to get out.

‘The water was barely warm enough to stay in the water for more than 5-10 minutes, even at the far end where the warm water jets are,’ a recent post on an Embassy Gardens residents’ Facebook group said.

‘Not that I’d normally rush to swim in an outdoor pool 13 floors up in the winter… but it’s been billed as a year-round facility that we’re paying to be open and staffed by two people.’

A resident said: ‘We’re livid. The outside temperature has obviously dropped, but the Sky Pool is still open to residents and currently uncovered. We’re basically heating the sky.’

Ballymore’s running cost estimates for the Sky Pool put the total figure at £720,000 for 2021 including £164,250 for heating, with residents footing the bill via service charges.