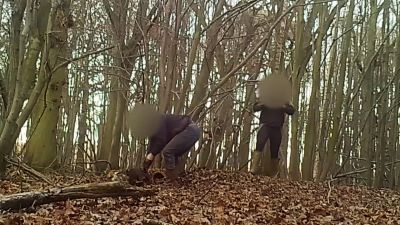 It’s been described as animal “torture”.

Footage secretly filmed shows a man in Essex attacking a fox with a garden fork. The film, shared exclusively with ITV News, sees the wild animal appearing from underground.

Initially it’s bitten by a dog, but once the man removes the fox from the jaws of the dog, he grabs the gardening tool and stabs at it repeatedly. Fighting for its life, the fox struggles trying to bite at the fork, but the man persists until eventually – with fox in hand – he leaves.

Essex Police told ITV news it has “arrested a 48-year-old man from the Bures area after receiving reports of animal cruelty. He was arrested on suspicion of offences under the Hunting Act 2004, the Animal Welfare Act 2006 and the Wild Mammal Protection Act 1996. He remains in custody at this time.”

Lee Moon, spokesperson for the Hunt Saboteurs Association said: “This is some of the worst abuse we have ever witnessed the wanton cruelty is hard to fathom.

“Even if people believe fox numbers need controlling (which we don’t) then the catching and killing should be done in the most humane way possible using appropriate equipment. Repeatedly stabbing a fox with a pitchfork is nothing less than torture.

“While most people who watch the video will be horrified, the calm and methodical manner in which [he goes] about catching and torturing this poor fox show how commonplace the actions are.”

The undercover filming was captured by North London Hunt Saboteurs who’ve been monitoring the site since 2020. Mike Radford an expert in animal welfare legislation at the University of Aberdeen reviewed the footage for ITV News he believes what has been recorded may be in breach of both the Hunting Act and the Animal Welfare Act for causing “a protected animal unnecessary suffering”.

A local hunt said they have “been made aware of an incident on 4 December which does not involve any of the hunt’s employees and is unrelated to any activities of the hunt who were not out hunting on that day. In light of this [we are] making further enquiries.”

Those opposed to hunting argue this secret filming reveals hidden truths about what is really happening in the countryside. The fate of the fox seen in the footage is unknown.

Where is Call the Midwife filmed? London locations revealed

Thousands line up for ‘jingle jabs’ on Christmas in England