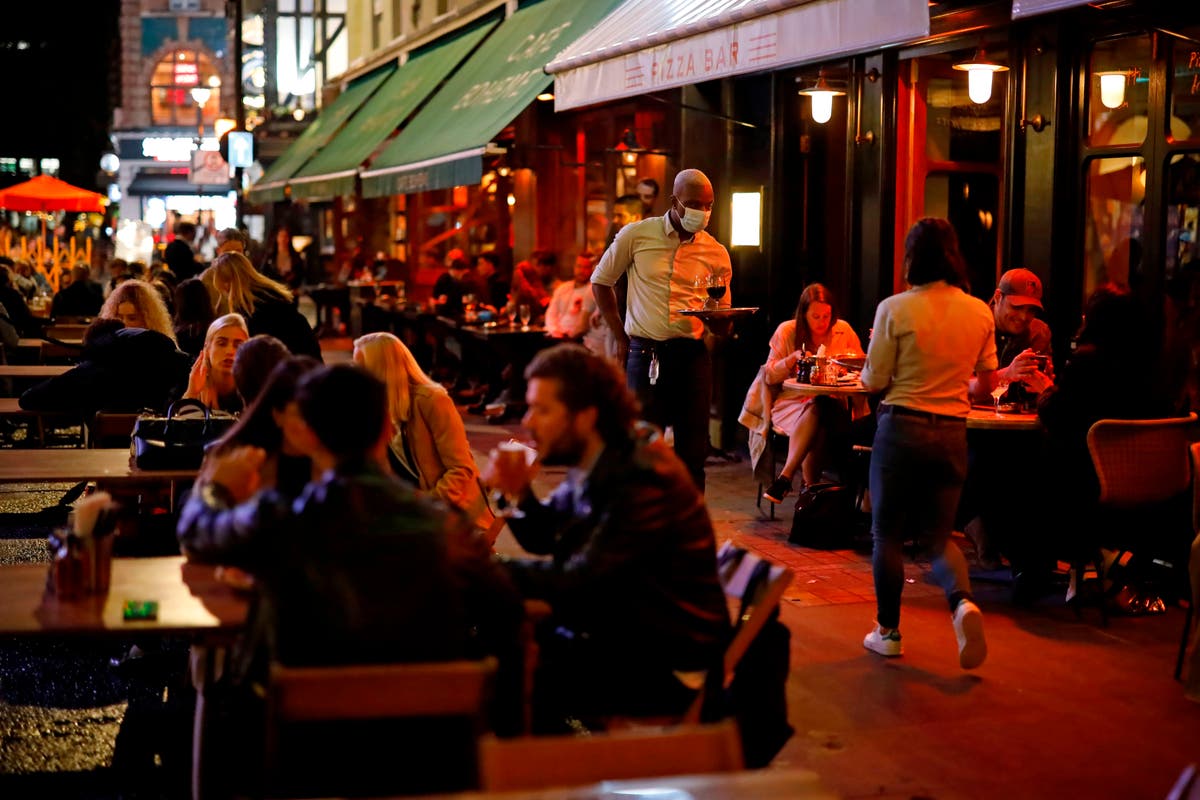 oris Johnson will not make any announcement over new Covid restrictions before Christmas Day, according to reports.

Meanwhile, hospitality bosses have pleaded with the Government for clarity over New Year’s Eve plans as initial studies claimed the Omicron variant of Covid is milder than Delta.

Jonathan Neame, boss of Britain’s oldest brewer Shepherd Neame, told the Daily Mail: “We hope that pubs stay open and that there are no further restrictions.”

It comes after two separate studies using UK-based data, both released on Wednesday, showed a significant drop in the risk of hospitalisation from the disease.

Analysis by Imperial College London said people with PCR-confirmed Omicron are 40-45 per cent less likely to spend a night or more in hospital compared with Delta.

Javid confirms no announcements on Covid until after Christmas

Health Secretary Sajid Javid has confirmed there will be no further announcements on Covid restrictions before Christmas.

“We are not planning any further announcements this week,” he told broadcasters.

“Despite the caution that we are all taking, people should enjoy their Christmases with their families and their friends – of course, remain cautious.

“We will keep the situation under review. We are learning more all the time as we have done from this new data.

“We will keep analysing that data and if we need to do anything more we will, but nothing more is going to happen before Christmas.”

NHS is ‘on a war footing’, says health service chief

NHS national medical director Stephen Powis has just released a statement as staff absences pile up in the health service, saying it is on a “war footing” amid a rise in Omicron cases.

He said: “The NHS is on a war footing and staff are taking the fight to Omicron, by boosting hundreds of thousands of people each day, treating thousands of seriously-ill Covid patients and delivering urgent care for other conditions, all while seeing a worrying, high and rising increase in absence due to Covid.

“We are once again ramping up to deal with the rise in Covid infections and, quite rightly, staff are making every possible preparation for the uncertain challenges of Omicron.

“This includes recruiting thousands of nurses and reservists, but while we’ll leave no stone unturned to get the NHS battle-ready, it remains the case that the best way to protect yourself and others is to follow guidance and to come forward and get your first, second and booster jabs.”

NHS ‘could still come under pressure’ despite Omicron being less severe

The NHS could still be under huge pressure despite the possibility that the Omicron variant may cause milder disease, a scientist has said.

Professor Paul Elliott, a chair in epidemiology and public health medicine at Imperial College London, said “there are many many cases and sadly some of those people may get severe illness and end up in hospital.”

He told Sky News: “From the beginning of December we saw this very dramatic rise in prevalence across the country, but particularly across London with the R number now substantially above one.

“This exponential increase in infections is absolutely being driven by the Omicron variant.”

Professor Elliott described it as “encouraging news” that perhaps the infection when you get it might be less severe in terms of hospital cases.

But he added: “Of course, with this very very rapid rise and increase in cases – and we have seen the national cases go above 100,000 – then more cases means more pressure (on the health service).

“Even though a smaller proportion (of people) might get severe disease or go into hospital, that could still result in many cases and, of course, that could give pressure on the health service.”

Number of NHS staff isolating in London doubles in a week

The number of NHS staff isolating in London with Covid has doubled in a week amid the rapid spread of the Omicron variant.

A total of 3,874 NHS staff at acute hospital trusts in London were absent for Covid reasons on December 19, more than double the number a week earlier (1,540) and more than three times the number at the start of the month (1,174), according to new figures from NHS England.

Decision to jab 5-11 year olds to be ‘carefully reviewed’

A decision on whether to offer vaccinations to all five to 11-year-old children will be “carefully” reviewed over the following few weeks, an expert has said.

Professor Anthony Harnden, of the Joint Committee on Vaccination and Immunisation (JCVI), told BBC News: “We still want to look at further data on that. It is really important that we see what the severity of illness is with Omicron on this particular age group.

“We know that with previous variants, the illness was very mild in children.

“We also want to have a look at further data from the United States where they are deploying the vaccine to all well children in terms of a safety profile, so there is no need to make that decision at the moment, but we will carefully review that over the following few weeks.”

It comes after the Medicines and Healthcare products Regulatory Agency (MHRA) approved the Pfizer vaccine for use in the age group on Wednesday.

Scotland to close nightclubs for 3 weeks

Nightclubs in Scotland will be closed for at least three weeks from December 27, Deputy First Minister John Swinney has said.

Legislation tabled by the Scottish Government at the Covid-19 Recovery Committee on Thursday will close nightclubs unless they can operate with appropriate social distancing between groups and table service.

It follows the announcement of new restrictions in Scotland earlier this week, bringing back the requirement for one metre of social distancing between groups and a maximum capacity of 100 at a standing indoor event.

Professor Andrew Hayward, director of the UCL Institute of Epidemiology and Healthcare and a member of Nervtag, told BBC Radio 4’s Today programme that the two new British studies of Omicron and emerging South African data showed “we can reasonably say, amongst mainly young adults who normally have mild disease anyway, that the severity is reduced compared to Delta”.

He added: “And that’s reduced maybe nearly a half in terms of likelihood of being admitted to hospital and maybe by about a quarter in terms of the chance of going to accident and emergency.

“I think what we can’t necessarily extrapolate to is what level of reduction in severity we might see in elderly people, and we also know that in elderly people the risk of severe disease throughout the pandemic has always been massively high.”

PM has ‘lost authority with the public’

The shadow culture secretary said Boris Johnson is unable to take decisions on Covid data because he has “lost authority with the public”.

Calling for more clarity from the Government on its Covid strategy, Ms told Sky News there is a “feeling” that “the prime minister is not actually able to take those decisions based very clearly on data because he’s got his own political problems, and he’s lost authority with the public in order to convey some of those messages”.

Labour has called for “more clarity” from the Government on its strategy for managing Covid.

Lucy Powell, shadow secretary of state for digital, culture, media and sport, told Sky News: “I think what we would like to see… is more clarity around what data points the Government is looking at, where the thresholds lie within those areas that are data points, and if those thresholds are crossed, what action would then follow.

“And what are the sort of set of restrictions that may or may not come in depending on those data points? Because at the moment, I think a lot of people just feel like they’re really stabbing in the dark.”

Older and vulnerable people in Britain may be given a fourth jab to combat Covid, a vaccines chief said today.

Professor Adam Finn, a member of the Joint Committee on Vaccination and Immunisation, said recommendations to ministers on such a roll-out would be made in the New Year.

Prof Finn, from Bristol University and speaking in a personal capacity, told LBC Radio: “There will be people probably who will receive a fourth jab.

“Whether that will be everyone is still very much in doubt. We do need to see how things go through this wave and beyond.”