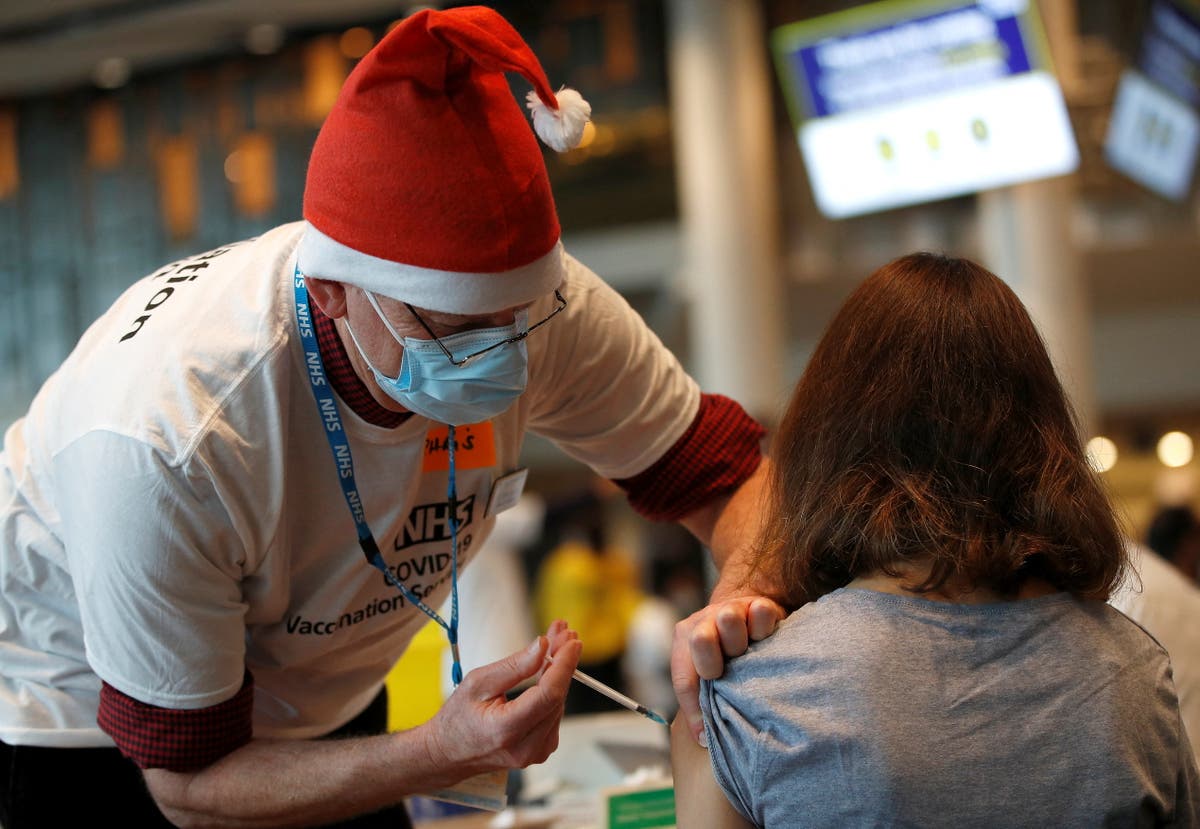 Children aged five to 11, who are in a clinical risk group, or who are a household contact of someone who is immunosuppressed, should be offered a Covid vaccine, the Joint Committee on Vaccination and Immunisation (JCVI) has said.

Further advice regarding Covid vaccination for other five to 11-year-olds will be issued in due course after consideration of additional data, and on the Omicron variant more broadly, officials said.

It comes as a record 968,665 booster and third doses of were reported in the UK on Tuesday, beating the previous record of 940,606 doses on Saturday.

Nicola Sturgeon has visited a mass vaccination centre to help as a volunteer, saying staff there are doing “heroic work”.

She visited the newly-opened vaccination site at the Edinburgh International Conference Centre on Wednesday.

Ms Sturgeon posted a tweet showing her handing out lateral flow kits and speaking to workers at the centre.

Nearly a million people given booster or third doses

A record 968,665 booster and third doses of Covid-19 vaccine were reported in the UK on Tuesday, new figures show.

The previous record was 940,606 doses on Saturday.

Scientific advisers to the government have recommended those children aged 5-11 who are deemed clinically vulnerable should be vaccinated, but stopped short of advising that all children should be jabbed.

The decision comes as a surprise after insiders in the Joint Committee on Vaccination and Immunisation had indicated that the body was ready to follow the example of the US and European Union in vaccinating all over-5s.

Roughly 330,000 children who are in a clinical risk group or live with an immunosuppressed adult should be offered two smaller doses of the Pfizer vaccine, with an eight-week gap between the first and second jab, the JCVI has said.

Officials in the southern Spanish region of Andalucia have suspended three school teachers without pay after they reportedly refused to wear a mask.

El Pais reported that two of the teachers worked at institutions in Granada and one in Malaga.

At least one claimed to be exempt from rules requiring mask-wearing but was unable to provide proof.

Rules in Andalucia, which is derived from national regulations, mean everyone over six years of age are obliged to wear masks “in any enclosed space for public use or that is open to the public”.

German health minister Karl Lauterbach has said a fourth Covid vaccine will be necessary, after Israel said it planned to offer the same to its citizens.

He also said Germany had a big enough supply of vaccines for a rapid booster campaign.

Around 70 per cent of the population has had two vaccinations and 32.6 per cent have received a booster.

Finland to vaccinate children 5 and over

Finland will from Thursday start offering Covid vaccines to children between 5-11 years of age, the Ministry of Social Affairs and Health said on Wednesday.

The Finnish Health Institute earlier this month recommended that children aged five and over should be vaccinated against Covid if they or someone in their household were at high risk of severe infection.

In the UK children aged 12 and over are routinely offered a Covid vaccine.

Christmas shopper numbers in central London have tumbled by more than a quarter against pre-pandemic levels, according to the latest figures.

The West End saw footfall decline on Tuesday by 27 per cent compared with the same day in 2019, the New West End Company said.

The figures were nonetheless 10 per cent higher than the Tuesday of the previous week.

Drakeford: Omicron means ‘we have to ask a little more’ of Welsh public

Mark Drakeford has thanked the Welsh public for keeping each other safe, as he announced the reintroduction of the rule of six from 26 December.

After a briefing on Wednesday afternoon, Wales’ first minister tweeted that he was grateful for people’s sacrifices. “The arrival of the Omicron variant means we have to ask a little more,” he said.

Mr Drakeford added that “vaccination remains our best defence against this awful virus”.

Staying with Europe, France has decided to cancel its order of Covid-19 antiviral drugs made by Merck & Co, after new data suggested it only reduced hospitalisations and deaths by 30 per cent.

Instead, authorities hope to receive Pfizer’s antiviral pills before February, according to the French health minister.

Meanwhile, Germany has placed an order for four million shots of the Novavax vaccine, which was given the green light by the EU drug regulator earlier this week.

It has also ordered 11 million doses of the new Valneva jab, which is yet to be approved in the EU.

Germany and Portugal are among the European countries to implement tougher Covid-19 measures over the festive season.

This comes as Hans Kluge, the head of the WHO in Europe, warned that Omicron would push “already stretched health systems further to the brink”.

My colleague Matt Mathers has this report: