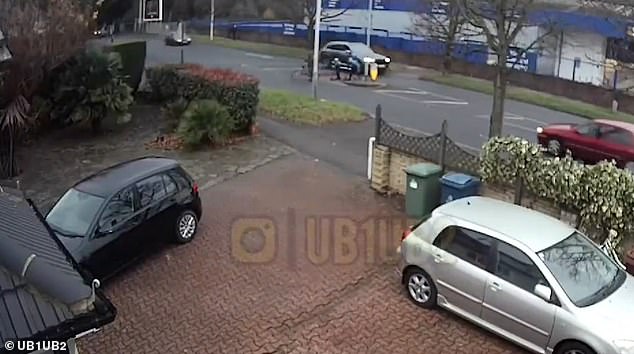 This is the moment a speeding car crashed into a woman and her two children as they were crossing a road in Ruislip, West London.

CTTV footage shows the family walking across before a car rushes through, suddenly hitting them and crashing into a nearby driveway through some hedges.

In the video the car appears to steer to the right, colliding with the family of three in its path.

A Metropolitan Police spokesperson said the driver was arrested at the scene last Monday and was taken into custody.

They added: ‘Police were called shortly before 8.30am on Monday, 13 December to reports of a car involved in a collision with three pedestrians.

‘Officers attended. A woman in her 30s and two boys were found injured. The woman and one of the boys were taken to hospital. 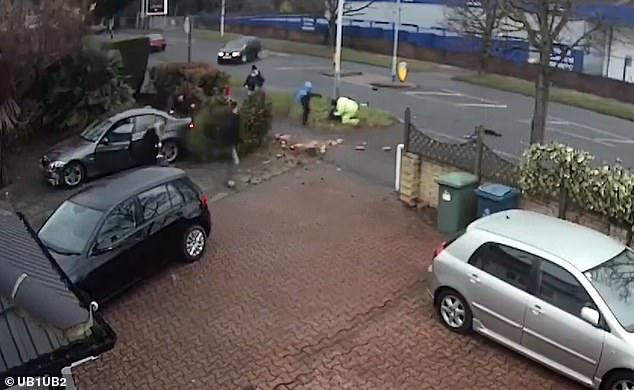 The speeding car smashes through some hedges and ends up in a nearby driveway in Ruislip, West London last Monday

‘Their injuries have been assessed as non life-threatening.

‘The driver of the car was arrested at the scene on suspicion of driving offences.

‘He was taken into custody and released under investigation pending further enquiries.’

Two ambulance crews attended, and a medic in a car as well as an air ambulance was also sent.

A London Ambulance Service spokesperson said: ‘We treated a woman and two children at the scene and took them to a major trauma centre.’