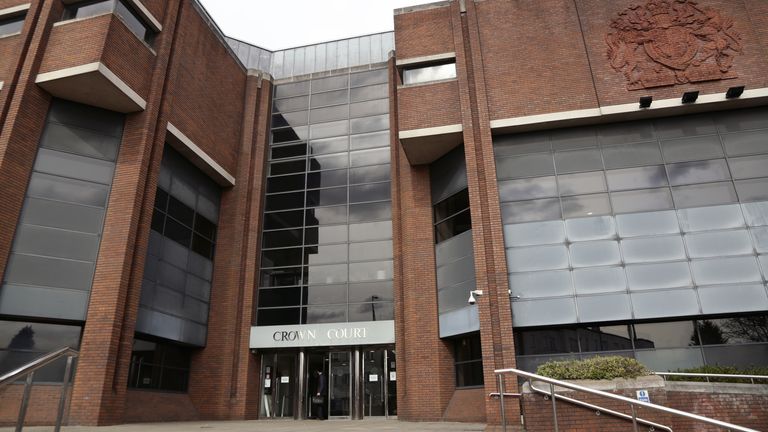 A father was murdered “for no reason” after his teenage son was attacked by a knife-wielding man at a bus stop in northwest London, according to police.

Michael Fadayomi, 40, suffered a fatal stab wound to his neck, after he was called by his 15-year-old child in April this year.

Marcus Griffiths, 42, of Hovenden Road in Cricklewood, has been convicted of murdering Mr Fadayomi, the attempted murder of his son, and possession of a knife in a public place.

The teenager had got on a bus with a friend just after 5pm on 29 April, when Griffiths confronted the pair, according to CCTV and witness statements in court.

A witness who sat near Griffiths on the bus said they heard him say “I’m going to kill someone today”.

A statement from the Metropolitan Police said: “Within moments [of them sitting down], and for no reason at all, Griffiths became aggressive towards them [the 15-year-old and his friend].

“At the next stop, which was Willesden Bus Garage, they all got off the bus.”

The two boys stood at the stop in Brent, at which point Griffiths took out his knife and attacked the 15-year-old.

The teenager managed to avoid two blows – which were aimed at head height – and ran away.

Image:
Griffiths was convicted after a two-week trial at Harrow Crown Court

At this point, Mr Fadayomi’s son rang his father as he lived nearby.

The 40-year-old went to the scene and got on to the bus, before climbing to the top deck where Griffiths was now sitting.

Police said a “verbal altercation” then followed, before Mr Fadayomi left the bus and started to walk down the road.

Griffiths came up behind him and stabbed him several times – with one wound to the neck severing an artery and causing fatal blood loss.

Emergency services were called, but despite the efforts of paramedics Mr Fadayomi was declared dead at the scene.

Griffiths was arrested at his home later that day, and denied any knowledge of what happened.

He later replied “no comment” in interviews to the Met.

Griffiths was convicted following a two-week trial, during which he claimed he was acting in self-defence.

He will be sentenced at a later date.

Detective Constable Rebecca Corser said: “This is a tragic case in which a man has lost his life for absolutely no reason at all.

“For a reason known only to himself, Marcus Griffiths was intent on causing serious harm to someone that day. Indeed, a witness who sat near him on the bus heard him say ‘I’m going to kill someone today’.

“Michael Fadayomi’s son and his friend had the misfortune to sit near him on the bus and he then turned his aggression towards them.

“After his son narrowly avoided being killed himself, Michael came to the scene and confronted Griffiths about his behaviour.

“Michael was not armed himself and did not show any physical aggression towards Griffiths. In a cowardly attack, Griffiths stabbed him from behind as he was walking away from the bus.

“I would like to offer my sincerest condolences to the Fadayomi family. Nothing can be done to bring back a much-loved father, however I am glad the jury has seen through Griffiths’s lies and he will now spend a long time in jail.”

The warning sign in your urine of a ‘life-threatening’ complication