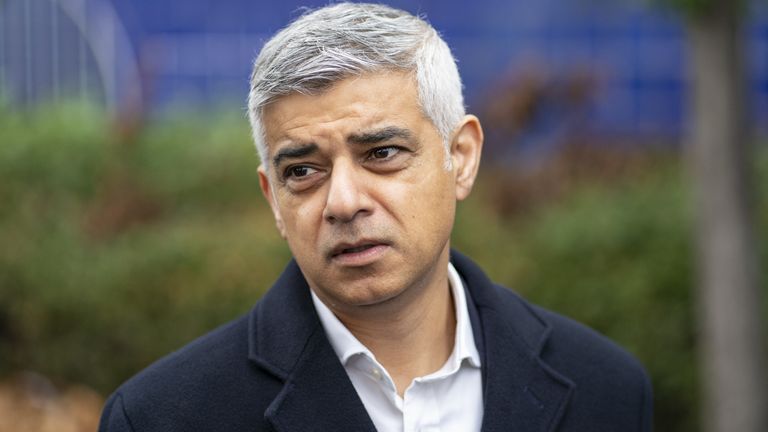 New Year’s Eve celebrations in Trafalgar Square have been cancelled “in the interests of public safety”, London Mayor Sadiq Khan has announced.

An event was being planned for 6,500 key workers and members of the public to see in 2022.

Mr Khan said that with COVID-19 infections at “record levels” in the capital he is “determined to work closely with partners to do everything we possibly can to slow the spread of the new (Omicron) variant”.

The goal is to “ensure our NHS services are not overwhelmed this winter”.

Coronavirus hospital admissions in London recently rose by 29% in a week, according to official data.

It has been reported that a third of people in the capital are completely unvaccinated.

Image:
Sadiq Khan admits his decision will be ‘very disappointing for many Londoners’

The mayor admitted his decision would be “very disappointing for many Londoners” but said “we must take the right steps to reduce the spread of the virus”.

There will still be a “live broadcast spectacular celebrating our city and highlighting the most defining moments of 2021”, Mr Khan continued.

But he urged Londoners to watch it on television because it will not be visible from the ground.

Other cities, including Rio de Janeiro and Paris, have also cancelled NYE celebrations.

On Saturday, the mayor declared a major incident in the capital over a “huge surge” of Omicron cases and an increase in hospital admissions.

He said it followed meetings with colleagues from the NHS, councils and the fire service.

He is asking the UK government to provide financial support for London’s retail, hospitality, and tourism sectors.

Across the whole UK, another 8,044 cases of Omicron were reported on Monday – a third down on Sunday’s figure of 12,133.

Trafalgar Square has already been in the news recently – after this year’s Christmas tree was mocked by onlookers as “spindly” and “half dead”.