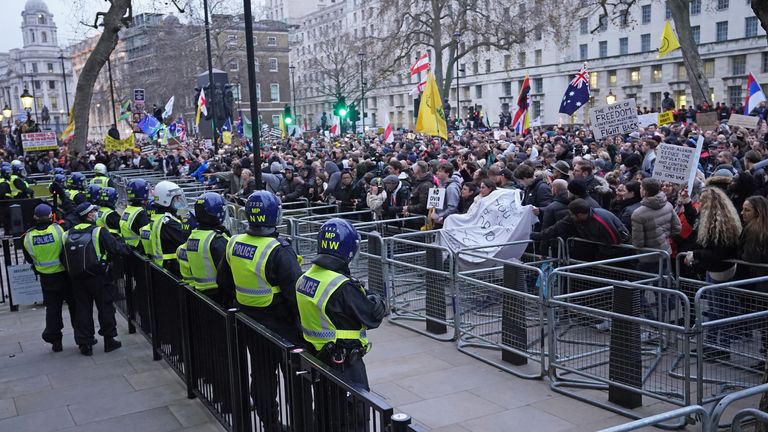 Thousands of protesters have marched through London to voice their anger over the latest COVID restrictions.

Amid reports that further measures could be on the way, crowds assembled in Parliament Square as part of a “Freedom Rally” against vaccine passports and other virus rules.

Demonstrators shouted “shame on you” as they clashed with police – with some officers suffering minor injuries while escorting a police motorcyclist through the area at around 12.30pm, Scotland Yard said.

Follow the latest COVID updates in our live blog

Image:
Protestors gathered on Whitehall near Downing Street to demonstrate against the latest COVID restrictions.

A group also targeted a shop in Regent Street at 3pm, abusing customers inside and throwing eggs at the building, before police intervened.

People held placards with slogans including “no vaccine passports” and “we are stronger together”.

A banner was laid on the statue of Winston Churchill in Parliament Square saying: “I’m not your patient, you can keep your f****** needle.”

Another poster said, “Our children are not lab rats!” – while others let off flares as the rally moved to Whitehall near Downing Street. 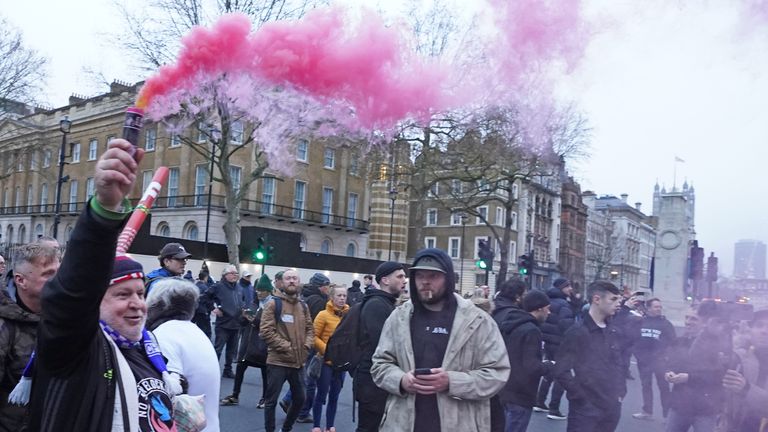 Image:
Protestors set off smoke flares during the “Freedom Rally” in central London

The demonstrations appeared to divide opinion on social media, with the hashtag #londonprotest trending.

Some backed the protests, insisting they were largely peaceful, and expressed their support “against tyranny”. 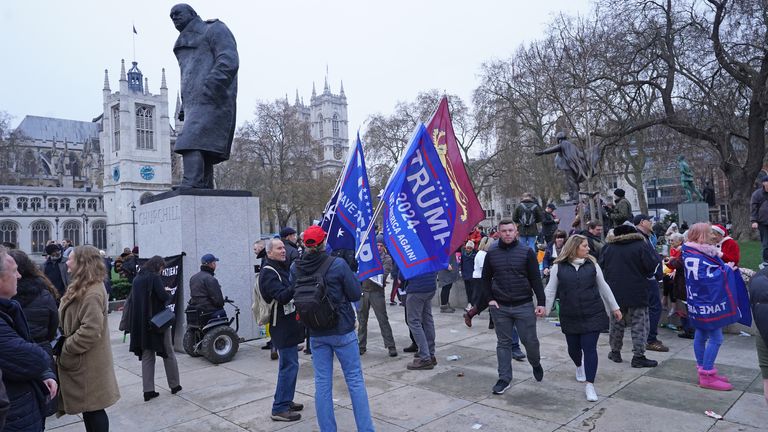 This Morning TV psychologist Emma Kenny tweeted: “I’m not there but watching the huge London protest! These are people from all walks of life, with one common goal, to ensure liberty remains and tyranny is brought down.

I’m not there but I’m watching the huge London protest! These are people from all walks of life, with one common goal, to ensure liberty remains and tyranny is brought down. Drs, nurses, religious groups, Mums, Dads, triple vaccinated and vaccine hesitant all sharing this moment

Others branded the protestors “incredibly selfish” – amid fears their actions will lead to the further spread of Omicron.

More than 10,000 new cases of the new variant were confirmed on Saturday.

Palliative care doctor, Rachel Clarke, tweeted: “The London Ambulance Service was 100 ambulances down yesterday because nearly 400 staff are off with COVID.

“But these charmers still choose to congregate today in their unmasked thousands. Absolutely staggering.”

Dr Julia Grace Patterson tweeted: “If you want to avoid more restrictions, congregating at a time when a new variant is accelerating isn’t a fantastic plan.”

If you want to avoid more restrictions, congregating at a time when a new variant is accelerating isn’t a fantastic plan. RT if you agree. #londonprotest

The demonstrators defied warnings from London Mayor Sadiq Khan, who declared a “major incident” over a “huge surge” of Omicron cases in the capital – as he urged Londoners to get both vaccines and the booster.

New figures show there were 1,534 COVID patients in hospital across the capital on Friday, 17 December – up by 341 or 28.6% compared to a week earlier.

“It is really important Londoners understand how serious things are,” Mr Khan said. 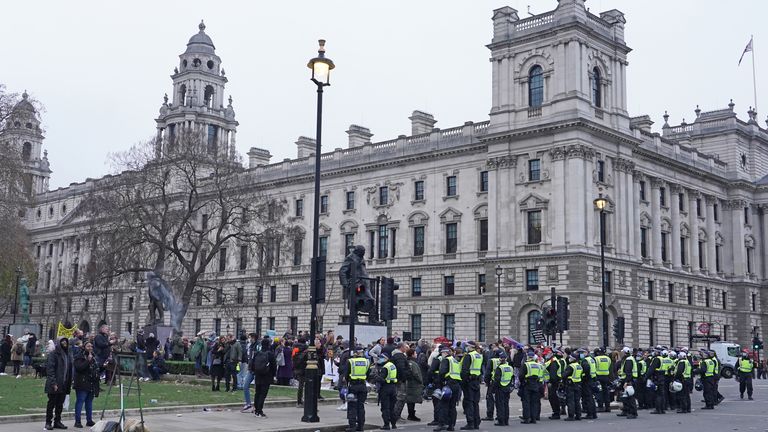 The Met said it was “closely monitoring the situation” and no arrests have been made so far.

The protest follows a number of demonstrations across Europe against COVID restrictions.

Several people were detained by police during a rally in Frankfurt, Germany, on Saturday.