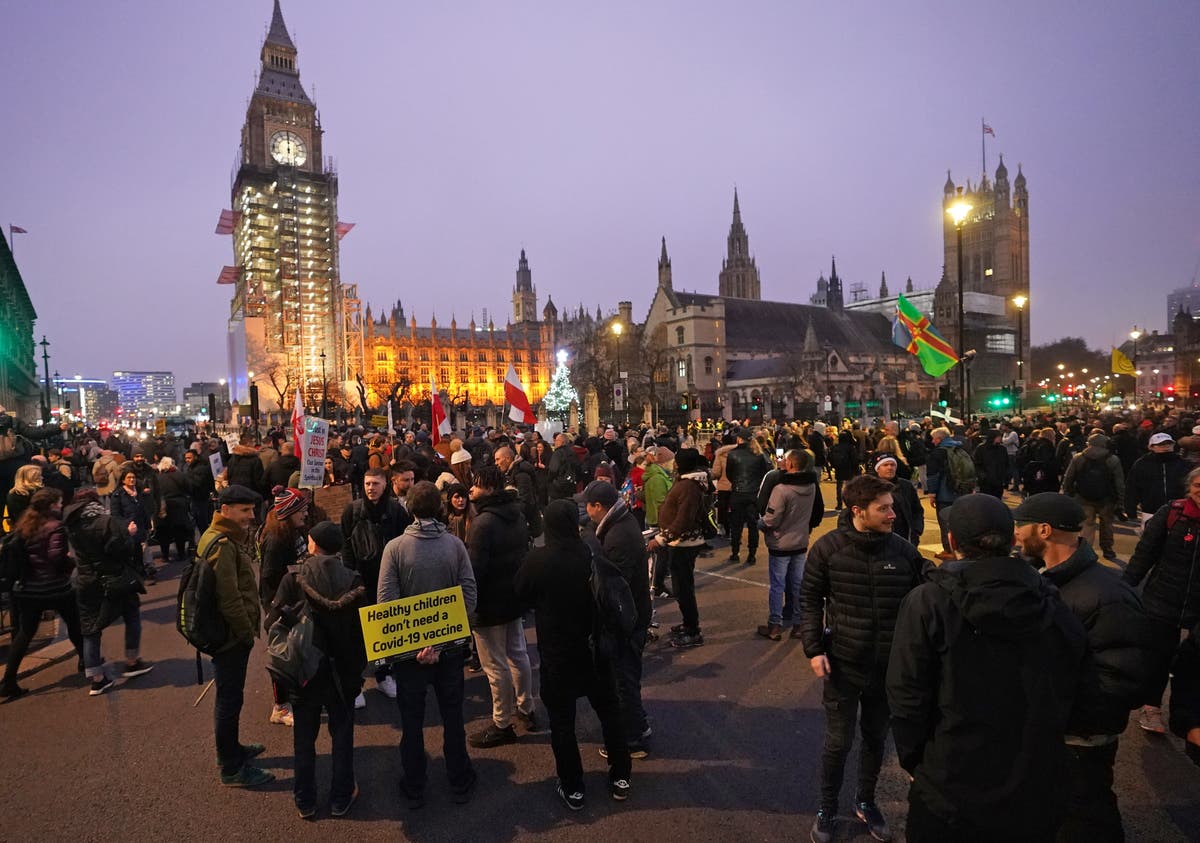 undreds of protesters against Covid-19 restrictions have gathered in Westminster as some clashed with police.

Footage shows demonstrators jostling with a line officers and scuffles breaking out near Parliament Square.

Scotland Yard said some officers suffered minor injuries when they were attacked by people attempting to stop colleagues escorting a police motorcyclist through crowds that had occupied a road.

In Regent Street, eggs were thrown at the window of a shop near the Apple Store.

The group are opposed to Boris Johnson’s Plan B announcement and the possible introduction of vaccine passports or a future imposition of a more restrictive Plan C measures.

Mayor of London Sadiq Khan has declared a “major incident” in the capital due to the rapid spread of the Omicron variant.

It means there will be closer co-ordination between key public services in responding to the situation.

Almost 100,000 people in the UK were confirmed to have contracted Covid-1 in the last 24 hours.

In London, more than 60 per cent of those testing positive were identified as having the Omicron variant.

Organisers Together Declaration said: “We represent more than 200 organisations, business groups, campaigners and professionals who have come together because we are gravely concerned about where the introduction of vaccine passports could lead.

“In the UK, we enjoy many hard-won liberties and rights, all fought for and defended by our ancestors. These rights are not only fundamental to our understanding of democracy, they are rights we believe all humans should have.”

Protestors are against vaccine passports for pubs, clubs and theatres which they called “unwarranted”.

The Metropolitan Police said: “Officers are deployed in central London to ensure a planned demonstration takes place safely and with minimal disruption to the general public.

“We are aware of videos shared online showing a minor scuffle in Parliament Square.

“At around 12.30pm, protesters attempted to stop a group of officers who were escorting a police motorcyclist through crowds that had occupied a road. Some officers suffered minor injuries but order was quickly restored.

“Shortly before 3pm, having made their way to Regent Street, a group of protesters stopped outside a shop and began directing abuse towards those inside.

“Eggs were thrown at windows but no injuries were reported. Officers quickly intervened and calm was restored without further incident.

“The demonstration has moved on and officers will continue to monitor it closely.”

There have been no arrests so far, police said.

Declaring the major incident, Mr Khan said: “The surge in cases of the Omicron variant across our capital is hugely concerning, so we are once again declaring a major incident because of the threat of Covid-19 to our city.

“The Omicron variant has quickly become dominant with cases increasing rapidly and the number of patients in our hospitals with Covid-19 on the rise again.

“We are already feeling the impact across the capital and while we are still learning about this variant, it’s right that London’s key agencies work closely together to minimise the impact on our city, including helping to protect the vital vaccination programme.

“We know that the vaccine offers our best defence against the virus. There are now more clinics in London delivering vaccines than at any point during the pandemic.

“I urge all Londoners to book their appointment or to go to one of the many walk-in centres across the capital as soon as you can.”

The mayor previously declared a major incident on January 8 due to the rapid spread of Covid-19 and its impact on the NHS, but was able to stand it down on February 26 as case numbers fell.