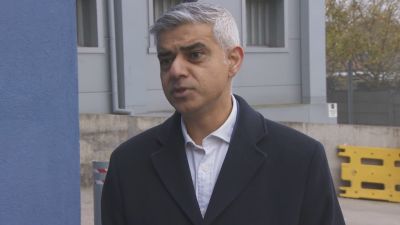 ‘It’s really important that where allegations of criminality are made, the police investigate’

Sadiq Khan has called for the Metropolitan Police to investigate allegations of an alleged Covid rule-breaking party at Downing Street after the force said it will not look into claims.

The Mayor of London said politicians should not tell the city’s police what to do, and the Met should act “without fear or favour”.

Earlier this month, ITV News revealed senior Downing Street staff joking about holding a Christmas party in Number 10 just four days after the event is alleged to have taken place last December when socialising indoors between households was banned.

Following calls for the Met to investigate the issue, the force said it will not due to an “absence of evidence” and that it does not investigate “retrospective breaches”.

“I’d expect the police to do what they normally do which is to look at the evidence, find the evidence and see whether any crimes have been committed.”

He added that it would be wrong “for politicians to use their own prejudices to tell the police what to do”.

Legal advice given to the Good Law Project and seen by ITV News has concluded that the decision not to investigate Christmas parties is likely to be “unlawful”.Lawyers have said declining to investigate retrospective breaches and citing a lack of evidence are both not in keeping with the law. Consequently, the Good Law Project plans to sue the Met Police.Earlier this week, a Downing Street source told ITV News that on the night of the alleged party an alarm was accidentally set off and that a Metropolitan Police officer that night entered the reception of Number 10 to make checks.

The party – attended by up to 50 people – is alleged to have taken place in a room just a few metres from the main foyer of Number 10.

Neither the Metropolitan Police nor Downing Street denied the story, with both saying they would not comment on security measures.

The Prime Minister has apologised for the leaked video of his senior staff laughing about the alleged event – but has not said a party took place, and has therefore not apologised for it having done so.

An investigation is underway into the events of December 18, as well as a quiz (after a picture emerged of the PM allegedly hosting it on December 15) along with accusations that rules were broken on December 10 at a festive drinks party held at the Department for Education.