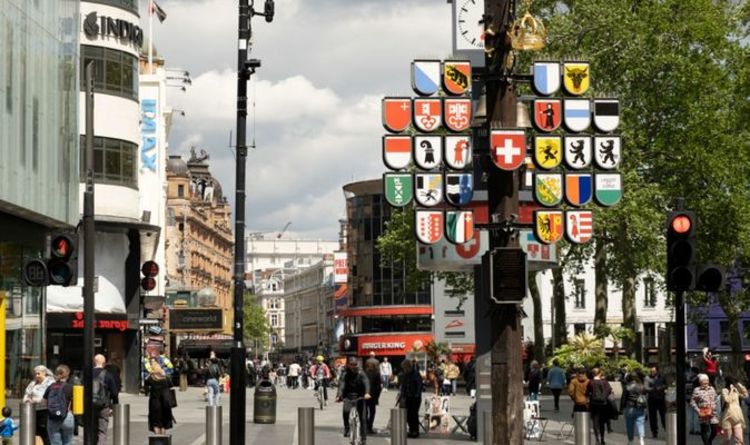 A 50-metre cordon is in place and hundreds of people have been evacuated from nearby buildings, the London Fire Brigade has said. Staff in offices and shops in the immediate vicinity were asked to vacate.

These evacuations were carried out as a precautionary measure.

Emergency services are at the scene and are managing the incident.

The square is currently closed to pedestrians.

Police have asked the public to avoid the area.

Two fire engines and around 10 firefighters from Soho and Euston were called to the scene on Tuesday morning.

The LFB said that engineers from Cadent gas are working to repair the leak.

Station Commander Clive Robinson said: “A gas main has ruptured and around 200 people have been evacuated from surrounding buildings and a hotel.

“Crews are expected to remain on scene throughout the morning.”

“Emergency services are in attendance.

“A number of buildings have been evacuated as a precaution, and the square is currently closed to pedestrians.”

Sqaishey, a YouTube personality with 1.04M subscribers, were among those evacuated from the neighbouring buildings.

They confirmed that they were staying at Leicester Square’s Premier Inn and that the evacuation process was “very organised”.

While PopHub, a co-working and studio space in Leicester Square, took to Twitter to advise those using their spaces to take an alternate route to the space.

Megan Harrison, an employee from PopHub, told Express.co.uk: “There are quite a few fire engines and police cars outside.

“No one is allowed in the main parts of Leicester Square, particularly near one of the cinemas and McDonald’s.

“There are however routes available for people to walk around, near the Londoner Hotel.”