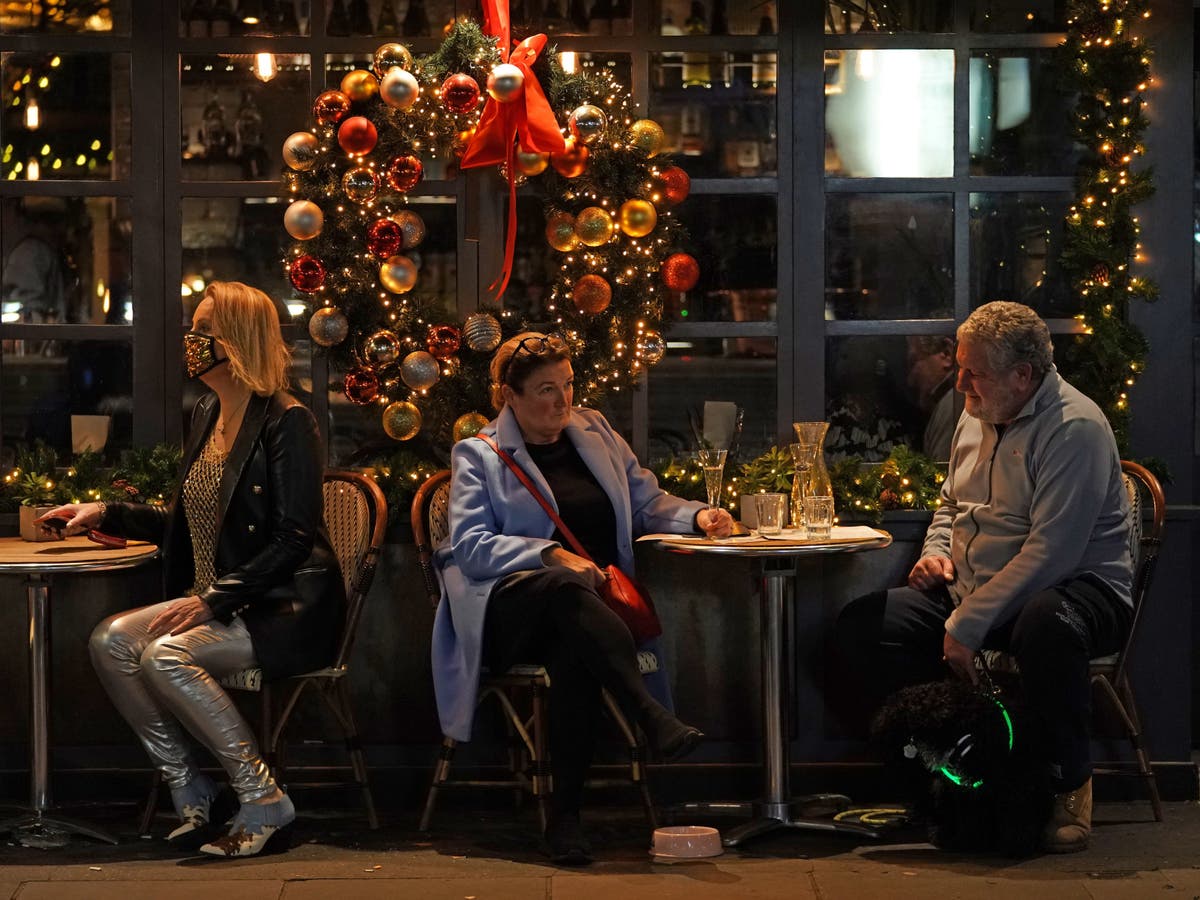 The UK has reported 90,418 new Covid-19 cases, and 125 deaths, marking a slight decrease from yesterday’s reported figures which saw a record-breaking 93,045 cases and 111 deaths.

A leading government adviser has warned a circuit-breaker lockdown may be needed before Christmas to stop the spread of the Omicron variant of coronavirus.

Stephen Reicher, professor of social psychology at the University of St Andrews and member of the Scientific Advisory Group for Emergencies (Sage), said it was clear Plan B measures alone would not be enough to stop the spiralling numbers of cases.

Prof Reicher, who was speaking to Times Radio in a personal capacity, said the time to act was now.

It comes amid reports officials have been drawing up draft plans for a two-week circuit-breaker lockdown after Christmas.

The mayor of London, Sadiq Khan, has declared a major incident after the capital recorded 26,000 new Covid cases – the largest daily rise since the pandemic began.

An emergency Cobra meeting with the devolved administrations is to be held over the weekend, where it is expected new Sage modelling – which predicts the Omicron wave could lead to up to 1,000 daily deaths – will be discussed.

The mayor of London has declared a major incident over the “hugely concerning” surge in Covid cases and rising hospitalisations in the capital.

Sadiq Khan said that in the last 24 hour period London had seen the largest recorded number of new cases since the pandemic began, with 26,418 infections.

Over the past seven days there have been 65,525 new confirmed cases while the mayor’s office said the number of Covid patients in hospitals had increased by 29 per cent.

How effective are the Pfizer, AstraZeneca and Moderna vaccines against Omicron?

The latest analysis by the UK government’s Health Security Agency indicates that two Covid jabs do not offer strong protection against symptomatic infection the new variant, with the current suite of vaccines less effective than they were against Delta.

However, those who have received a booster jab remain up to 70 per cent protected, the agency found, underlining the importance of getting a third shot as soon as possible.

Earlier results from studies conducted by the German Centre for Infection Research likewise found that there were significant reductions in antibody potency for the Pfizer/BioNTech, Moderna and Oxford/AstraZeneca vaccines against Omicron.

Aston Villa vs Burnley was postponed barely two hours before kick-off due to an outbreak of Covid-19 among the home squad.

The Premier League match was scheduled to kick-off at 3pm GMT on Saturday at Villa Park. However, Villa recorded fresh positive cases of the coronavirus overnight leaving them so short of available players that the league’s board accepted the club’s request to call off the match, with official news going out at 12.40pm, just two hours and 20 minutes before the game was due to start.

Omicron takes toll on retailers on last weekend before Christmas

Concerns over the soaring rates of Covid-19 driven by the spread of the Omicron variant are keeping many shoppers away from central London on what is usually the busiest weekend of pre-Christmas trading.

Oxford Street, the capital’s flagship shopping destination, was noticeably quieter on Saturday than during the bustling festive period in pre-pandemic times.

While online sales are booming and retail parks that can be reached by car have been busy, city centres have seen a marked drop in footfall, according to trade groups including the British Retail Consortium.

The Omicron wave could lead to up to 1,000 daily deaths, according to government modelling, The Independent understands – heightening concern among ministers that a lockdown will be needed in the coming weeks.

The estimates are a worst-case scenario modelled by members of the government’s Scientific Advisory Group for Emergencies (Sage), and have placed Downing Street on high alert.

Experts have warned the government that the accelerated booster roll-out will not be enough to prevent what could be as many as 3,000 daily hospital admissions, PA reports.

Scientists have said the impact on the spread of the Omicron variant will not happen in time “to mitigate these hospitalisations for the rest of 2021”.

Boris Johnson has hailed the importance of the booster programme, tweeting on Saturday to again urge everyone to “please play your part and Get Boosted Now”.

But a document from the Scientific Pandemic Influenza Group on Modelling, Operational sub-group (SPI-M-O), published on Saturday, warned that without further measures, figures in England could hit a “minimum of 3,000 hospital admissions per day at their peaks, with some scenarios having significantly worse outcomes during the first few months of 2022”.

They advised that in order to prevent “such a wave of hospitalisations, more stringent measures would need to be implemented before 2022”.

The Netherlands will go into a lockdown from Sunday morning until at least 14 January to limit a feared COVID-19 surge due to the Omicron coronavirus variant, Prime Minister Mark Rutte has announced.

“The Netherlands is again shutting down. That is unavoidable because of the fifth wave that is coming at us with the Omicron variant,” he told a news conference.

All non-essential stores, bars, restaurants and other public places in the country will shut from Sunday.

Sage has warned Boris Johnson that action is needed on tougher Covid restrictions in England before the New Year to prevent “considerable pressure” on the NHS.

Documents released on Saturday by Sage emerged as the London mayor, Sadiq Khan, declared a “major incident” in the capital due to a rise in infections.

Hospital beds being closed due to staff absences, nurse says

A nurse in self-isolation has said NHS workers are “demoralised” and staff shortages, caused by a rise in Covid-19 cases, are now closing some hospital beds, PA reports.

The nurse, who wishes to remain anonymous but works in Newcastle, said the situation has “acutely” worsened in recent weeks, and that staff have been redeployed to support other departments “for months” due to staff shortages.

She will spend Christmas alone after testing positive for the virus.

“I work in surgery and we’ve had to cover other surgical specialities and take on medicine patients too,” she said.

“The staffing has got acutely worse in the last few weeks… all of the wards are short-staffed at all times, some have had to shut beds.”

She also added: “Morale not helped by Boris (Johnson) and the lack of restrictions to control the outbreak.”

“The Government message on masks and distancing should be clearer.

“When you’ve got hospital visitors who won’t keep a mask on for an hour visit and have to go to supermarkets where so many are unmasked because ‘it’s uncomfortable’, it’s really demoralising when we’ve been trying to keep people safe for two years.”

Experts have warned that indoor mixing is the “biggest risk factor” for the spread of the Omicron variant of Covid-19, PA reports.

Additionally, leaked minutes from a Sage meeting on Thursday said stricter measures may be needed for Omicron due to its transmissibility.

Minutes from the meeting said that this could include “reducing group sizes, increasing physical distancing, reducing duration of contacts and closing high-risk premises”.

And they said that lateral flow tests should also be used on a group basis – so if one person in a group tests positive before going to an event, their whole group should also not attend, even if they did not test positive.